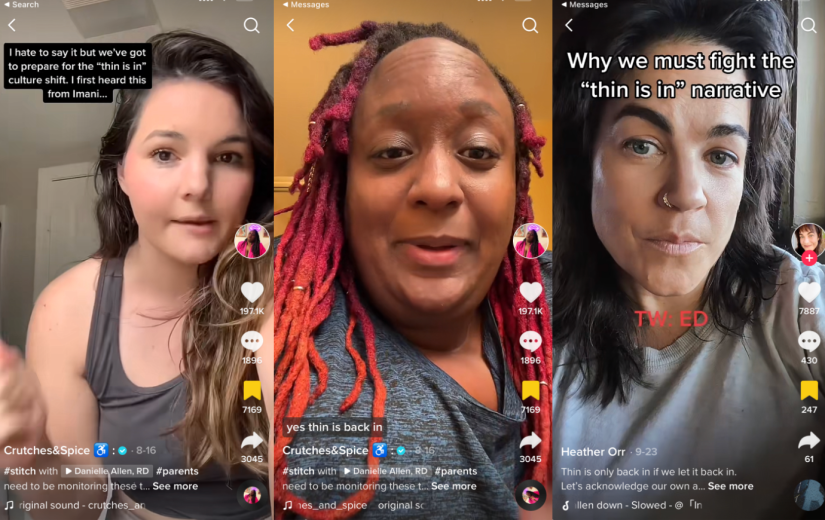 Glossy Pop Newsletter: ‘Thin is in’ might be making a return — the implications are dangerous

On May 2, I sat at home watching coverage of the Met Gala. I listened carefully as Kim Kardashian talked about the process she’d put her body through in order to fit into Marilyn Monroe’s 1962 dress. “I looked at [the people at Ripley’s, which owns the dress], and I said, give me three weeks,” Kardashian told La La Anthony in a red-carpet interview. “I had to lose 16 pounds … to be able to fit this.” She noted that, had she not achieved her goal, she simply would not have attended the Met Gala at all. Kardashian credited wearing a sauna suit twice a day, running on a treadmill, completely nixing all sugars and carbs, and eating only the “cleanest veggies and proteins.” “I didn’t starve myself, but I was so strict,” she said.

Literal starvation or not, I felt my stomach turn. I was concerned for women around the world hearing this, reading this and seeing it on social media.

Kardashian’s red-carpet stunt wasn’t the only cultural marker suggesting a shift was afoot.

As far as fashion trends go, low-rise jeans were making a comeback, as reported in an April issue of this newsletter. Searches for the trend were up and brands were rushing to meet demand. I realized there was, in fact, an insidious nature to this particular trend, which is simply inaccessible to many bodies. As Amanda Richards, writer of the newsletter Fat Hell, put it in a recent issue, “One of the most glaring signs of this regression is the return of a trend like low-rise jeans. Something we once laid to rest as a relic of a fatphobic era in fashion has been dusted off, repackaged and resold.”

Released earlier this week, a new report, “The Real Cost of Beauty Ideals,” found that internalized body dissatisfaction and appearance-based discrimination costs the United States over $800 billion a year.

This shift is even impacting the pharmaceutical industry, thanks to the Hollywood set. In September, Variety published a story detailing the sudden rise in demand for Ozempic, a diabetes drug that can also lead to dramatic weight loss. It said: “One top powerbroker told Variety that half of her call sheet last week was full of friends and clients wanting to discuss the risks of Ozempic, which has claimed devotees from every corner of the industry.” Today, there is a shortage of the drug for diabetic patients whose well-being relies on this medication.

On TikTok, the conversation around thinness is noisy. Some proclaim Kardashian alone, who some speculate has had implants and a BBL removed, in addition to her obvious weight loss, has moved the needle. Others reject that notion, saying it’s ridiculous to suggest that a single individual has such a broad impact on societal norms and trends.

Amanda Raffoul, a researcher at Boston Children’s Hospital who works with Harvard’s STRIPED, said she’s been seeing many of the same TikToks I have. “I sort of agree that … culture is generally reflecting that [a return of thin is in],” Raffoul said. But she issued an important disclaimer: “Thinness never really went out of style.”

It’s a tough pill to swallow. Fashion journalists often talk about which brands have expanded their sizing. Tanya Taylor, for example, is known for her commitment to extended sizing. Meanwhile, Staud and Old Navy both expanded sizing and then walked back their expansions. Influencers like Katie Sturino have encouraged brands to “#MakeMySize,” with her impactful social media series. And runways have made small steps towards showing more size diversity, though this season was widely criticized for not showing much progress.

“The narrative of body ideal trends is a bit of a dangerous one because it takes us away from society’s core belief that fat is bad,” Raffoul said. “Even in the years where there was this shift in people wanting to be curvier, that curviness still came with fitness. And so the narrative around things might be slightly different, but the core message is still the same, which is that if you don’t have this type of body, you are not ‘good enough,’ or you are not ‘worthy enough,’ or you need to buy this new product.”

Raffoul said, for the past decade or so, thinness was often wrapped up in the language of ‘wellness.’ However, “Brands and celebrities are a lot smarter about the fact that they can’t tell people to go on explicit and extreme diets now,” she said.

For Imani Barbarin, known on social media as Crutches & Spice (467,000 followers on TikTok), the implications of a return to thinness trending are dire. Barbarin had a TikTok go viral in which she spoke to parents about the dangers of their daughters engaging with “thin is in” types of content. In an August video with nearly 1 million views, Barbarin stitched another creator who cited her, with a warning: “I hate to say it, but we’ve got to prepare for the ‘thin is in’ culture shift.” Barbarin duetted the video and responded with a warning, suggesting that “thin is in” can actually lead children down far more dangerous routes — such as to the alt-right.

Barbarin and Raffoul spend far more time engaging in these discourses than I do, and both believe that the pandemic had a negative impact on society’s relationship to weight and body image. And Raffoul can attest to Barbarin’s hunch: Eating disorders among children and teens did spike during the pandemic, she said.

Barbarin recalled, “I was reading a lot of discourse around how societies come out of pandemics,” she said, adding the caveat that we are very much still in a pandemic. “After past pandemics, society has obsessed around who was essentially “fit enough to survive.”

It may have started off innocently, Raffoul said, citing the #hotgirlwalk (502 million views on TikTok). But she decidedly and quickly noticed a shift, she said. It became: “‘I’m going to start going on my daily pandemic walks.’ That was [not just to get outside or get] some fresh air, but because ‘I can’t keep on this weight that I put on in the early months of distress.’”

There are more facets of this issue than I can tackle in one week’s Glossy Pop newsletter — but they are on my mind, and I will continue to think about how they impact culture.

I’ll leave you with some of Barbarin’s advice:

“I ask people to really confront their own motives as to why they want to be thin: Do you want to be thin simply because you want to — like, you have aches and pains, and you want to love your body more and accelerate the way your body moves? Or do you want to move around and exercise and be thin, so that you appeal to somebody or so that you feel like you are less excluded from society? I would really interrogate those motives and encourage [people] to not look at one’s body as a prescription tied to somebody else’s [perceptions]. Nobody should be able to influence [your body], nor should anybody be able to use it against somebody else. So anytime you hear those types of things, push back.”

“Monroecore” is the next big trend sweeping the beauty industry