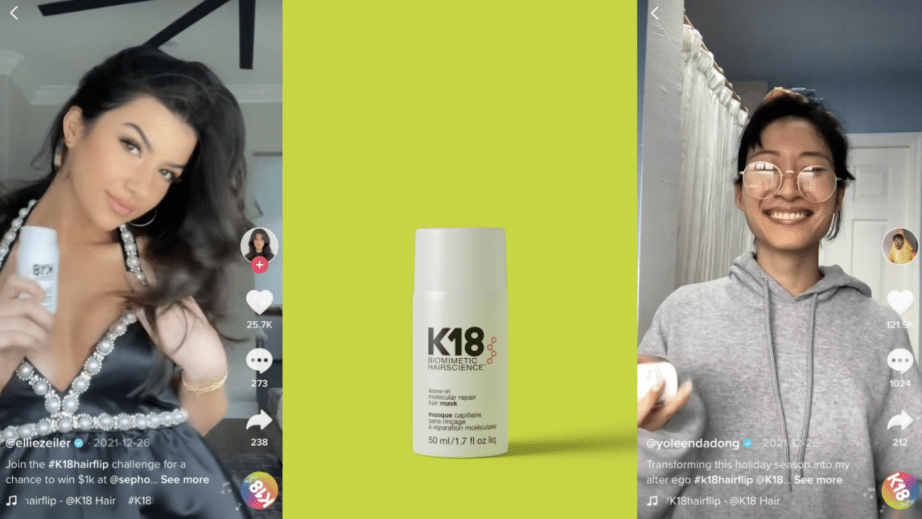 When K18 first launched in December 2020, it focused on the hairstylist community. A year later, ready to go wider, it launched a massive TikTok campaign with the hashtag #K18hairflip, which has 9.5 billion views.

The brand wanted to make a splash on TikTok, having recognized the app’s “shelf-clearing” ability and the “frenzy” it can create around beauty products, said Michelle Miller, svp of marketing at K18. (See: Clinique’s Black Honey lipstick over the summer.) So it created a two-pronged approach: First, it launched aTikTok ad starring Mikayla Nogueira and Brad Mondo. Then, it kicked off a campaign, the #K18hairflipchallenge. It centered on a custom song created by the creative agency Song Candy and performed by “The Voice” finalist Tamara Jade. 100 creators were paid to take part. The budget for the campaign was $600,000, which paid off. According to Tribe Dynamics, which measures earned media value (EMV), posts mentioning “k18hairflipchallenge” powered $13.1 million of K18 Hair’s total $16.1 million EMV in December.

Rather than partner solely with beauty or hair influencers, K18 worked with mega TikTokers including Leenda Dong (@yoleendadong, 17.6 million followers), known for her funny posts. Like so many other beauty products and campaigns that see success on TikTok, the hair flip challenge thrived on transformation. The commercial featuring Nogueira centers on the premise that the mega influencer has a big event coming up and needs to rehab her hair quickly. In all of the content created for the campaign, the creator shows their post-K18 transformation as they flip their hair.

I was first introduced to K18 in early 2021, by Jon Reyman, owner of the salon Spoke & Weal. At the time, it was called K Hair Pep. Reyman has cut my hair for years and is known for being discerning. Rather than stocking every cool new brand du jour, Spoke & Weal primarily uses Aveda products and Dyson tools. Reyman is not one to hawk product. And, frankly, I am not one to use hair products, which he knows.

All this to say that, when Jon told me to take home a bottle of a K Hair Pep product and use it, I listened. In the months that followed, K Hair Pep rebranded to K18. Then, at the end of last year, it launched in Sephora and achieved a feat all brands now dream of: TikTok ubiquity.

Reyman was introduced to K18 by his business partner, colorist Christine Thompson, who discovered the brand by way of its founder and CEO, Suveen Sahib. Sahib had personally delivered an early iteration of the product to her — K18’s San Francisco office is next door to a Spoke & Weal salon. The duo now works with the brand and the products are used at Spoke & Weal’s salons.

But Thompson was initially skeptical. As a top colorist, she receives countless products, and most do not impress. The story Reyman told me goes like this: When a client asked for a color treatment that Thompson would typically say no to, due to its damaging effects, she used it as an opportunity to test K18. Thompson then monitored the situation closely, observing the process, “and it was remarkable. It blew her mind,” Reyman said. With that, Reyman and Thompson, industry influencers, were on board with the brand.

The support of stylists and colorists was fundamental to K18 establishing itself, and the brand believed that that support needed to come before a TikTok campaign. “Product developments like K18 only come along every 10-15 years, so we knew that if we could get it in front of the hair community, it would take off,” said Miller. Professionals, she said, remain the brand’s North Star.

K18’s only consumer product is its Leave-in Molecular Repair Hair Mask, which sells for $75. The mask is used in place of a conditioner and is not rinsed out. According to the brand, it takes just four minutes to soften, smooth and strengthen hair, and can benefit all hair types. The brand prides itself on simplicity, given both the little time it requires and the fact that it allows for a single-product regimen.

Olaplex launched in 2014, kicking off the growth of the bond-builder category, composed of products designed to repair damage from the inside out. In 2021, countless brands debuted products in the category — The Inkey List, Philip Kingsley and Amika, to name just a few. K18 claims to take things a step further. “We are the first company to apply synthetic biology to the hair. We believe synthetic biology is the future of the beauty industry,” said Sahib.

“It was painstaking work to go deep into the genome and see how keratin is created by the human body and its biology,” Sahib said. “When you do chemical services, you have these polypeptide chains that run along the length of the hair, and these break. And also, in between these chains, you have these disulfide bonds, which is what the bond builders can correct and temporarily patch up.”

These polypeptide chains are what give hair strength and elasticity. When they break, even if the hair remains intact, it becomes limp and lifeless. According to the brand, K18 gets into the cortex of the hair, reconnects these polypeptide chains, repairs disulfide bonds, and, thus, brings hair back to life.

“Whether due to water damage, damage from combing or brushing, heat damage from different tools, chemical damage or environmental damage, the integrity of everyone’s hair has been compromised. But this [product] strengthens the hair. So people with fine hair now have longer hair that normally would have broken off. It’s denser because it’s stronger,” Reyman said.

When I recently spoke to Reyman about the product, I mentioned that other brands had told me that they are coming out with innovations that will rival K18, but would not disclose further information. “Not possible,” Reyman said. “The science behind K18 can’t be replicated.”

Cuyana’s first foray into the beauty world, its Essential Beauty Set debuted on January 30. The $195 set includes its bestselling Large Travel Case, plus a curation of highly covetable beauty products: a Supergoop SPF, a Summer Fridays lip balm, a Shani Darden cleanser, a Tatcha exfoliating powder and a set of six Cadence capsules, which can be used and re-used to store product when you travel.

In keeping with its signature dedication to a theme, the latest from Vacation — the brand behind the most Instagrammable sunscreen ever — is its new “Lip Desserts.” The collection is made up of five lip balms with SPF 30 that sell for $25 as a set or $5 each. Their delectably nostalgic flavors include Strawberry Jello Salad, Bananas Foster, Pineapple Upside Down Cake, Bombe Alaska and After Dinner Mint.

Collaborations are becoming increasingly quirky, but we kind of love it. Take “Studio Hours,” a capsule collection created by Madewell and Backdrop, a paint company. Cans of paint in an exclusive color — the dusty rose pictured above — are being sold alongside clothing in the same hue. “We love joining forces with new and unexpected creative partners,” said Natalie Ebel, co-founder of Backdrop, in a press release. “It’s been especially exciting to translate our perspective as a design brand into the fashion space with Madewell. The collection combines our take on a modern, new color with the silhouettes of classic workwear. [It also] celebrates the artistic process and the power of color as a means of transformation, from home design to apparel.”

Launch of the week

Along with announcing the upcoming launch of a baby, Rihanna had a big beauty launch this week. Fenty Beauty debuted its first refillable lipstick, the Icon The Fill Semi-Matte Refillable Lipstick, which comes in 10 shades. A standout is the aptly named “The MVP,” a classic blue-red. Refills are $20, and the eye-catching refillable case is $12.

From the desk of Sharon Chuter: An open letter to Merriam-Webster & Oxford English dictionaries

How Lily James transformed into Pamela Anderson for “Pam & Tommy”

Meet the woman behind the Rolls-Royce of makeup brushes