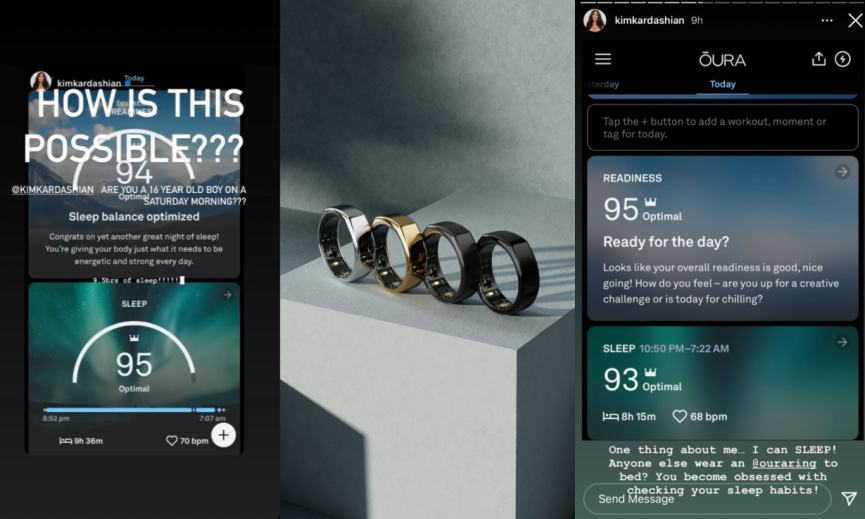 How the Oura Ring became the celebrities’ favorite health tracker

There are very few products that Kim Kardashian West promotes, outside of her own, for free. The Oura Ring is one of them. In fact, she’s has posted screenshots of her “scores” from the tracker ring’s app multiple times, once in response to Gwyneth Paltrow — via an Instagram Stories dialogue, the duo compared their stats. So, how did the $300 Oura Ring (and its $6 per month subscription) become the celebrity tracker of choice, and where did the brand come from?

Founded in Finland in 2013, the ring initially focused on sleep. It came onto my radar a number of years ago because Prince Harry was wearing it.

Since, along with Kardashian West and Paltrow, it’s earned fans including countless professional athletes, Miranda Kerr and Diplo.

Oura’s CMO, Karina Kogan, said there are a number of reasons the ring has been successful. First, there’s the “form factor,” she said: “The product is unobtrusive. It doesn’t have a screen, it has no haptics, it doesn’t buzz at you all day — it’s just there in the background. Because you wear it on your finger, it’s not in your face.” The initial focus on sleep also helped, she said. “A big differentiator between Oura and a lot of other trackers is how great we are at sleep. Not everybody is super into fitness, but everybody, for the most part, sleeps,” she said.

Ultimately, “it was a scene everybody talked about, because it was very sexy. We were happy to be in a scene that was a pop culture moment,” she said.

The brand prides itself on the growth it’s earned via those organic moments. Along with “And Just Like That” and Kardashian West’s Instagram Stories, it’s also made a cameo on “Jimmy Kimmel Live.” On the September 2021 episode, Jennifer Aniston talked about temporarily misplacing her Oura Ring while tossing a salad. “This is ruining my life, because I’m so obsessed with the Oura Ring and looking at my sleep patterns and how badly I sleep, and it shames me every day,” Aniston said of the ring, which Kimmel, in fact, introduced her to.

“That’s just two friends talking about, like, geeking out about their love of this product and the fact that they’re addicted to their sleep scores. You can’t manufacture that,” said Kogan.

All of these cultural moments have led to major success on social media, as well. According to Tribe Dynamics, which measures earned media value (EMV), “Oura netted $10.7 million in EMV in 2021, a 282% year-over-year surge. Tribe linked that growth to Oura’s 100% increase in influencer community size, to 689 content creators, and 196% boost in content volume, to 3.1k posts.

Oura recently released a new version of its hallmark product, which it labeled the Gen 3, in November 2021 — it received mixed reviews from The New York Times. Added features include the ability to measure daytime heart rate, which the brand said was the most requested feature from Gen 2 users. Now, green LEDs monitor a user’s heart rate 24/7. It also features a new period prediction feature, which, according to the brand’s press materials, “accurately predicts your next period 30 days in advance and alerts you 6 days before it starts,” based on the body’s natural temperature changes throughout the menstrual cycle.

The brand plans to continue growing organically. “We’re not actively reaching out, like, ‘Whose fingers can we put rings on?’ It’s really not like that,” Kogan said.