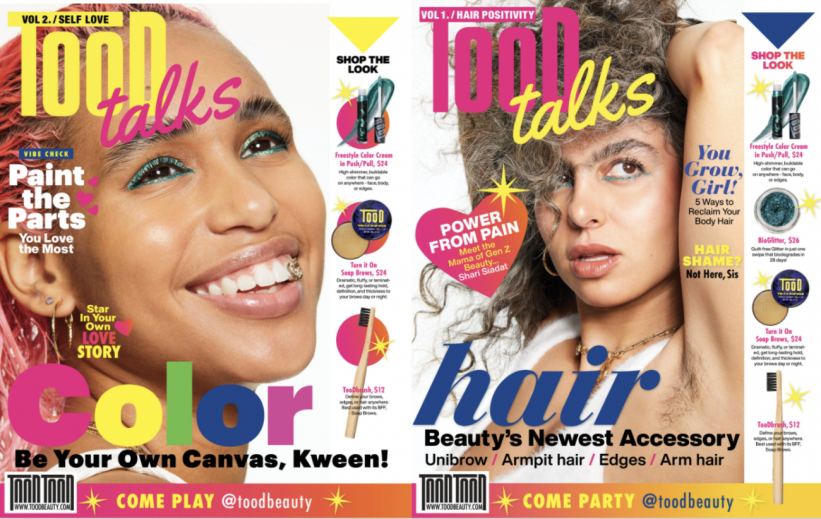 Like many other millennials, I lived for print magazines as a pre-teen and teen. That included Teen Vogue (now solely a digital publication), Elle Girl (RIP), CosmoGirl (RIP) and Seventeen (which now only publishes special editions in print), to name a few.

A quick Google search of past covers serves as a trip down memory lane, bringing up headlines like, “Over 1,000 Ways to Look Pretty. Plus, The Cutest Jeans For Your Butt,” and “Flat Abs! By New Year’s Eve.”

To say that times have changed would be an understatement. Back then, there was no Instagram, let alone TikTok. Today, the exchange of information is far more democratic — but also unmonitored. Many Gen Zers get their information from peers they follow on social media.

And though countless brands aim to create content that resonates, few succeed. One success that comes to mind is Rare Beauty, which is helped by founder Selena Gomez’s massive fanbase, her own transparency about mental health issues and the fact that the brand launched with a massive philanthropic initiative.

TooD Beauty, which launched in January 2021, was not conceived of as a “Gen-Z brand,” said founder Shari Siadat. But it fits the bill, given its core values of self-acceptance and sustainability — the brand launched the first biodegradable glitter in June 2021. Launches like the glitter have given the brand credence with Gen Z. “They understand that the dollars they spend are their way to vote or participate in creating the world that they want to belong to,” Siadat said. The brand’s initial launch included its Color Creams, which are brush-on metallic pigments that the brand has shown in its marketing worn across a unibrow, or in armpit hair — ways of wearing makeup that defy conventional beauty standards.

The brand’s new campaign, launched on Friday, aims to initiate conversations around themes including societal beauty standards, using the nostalgia of the magazine cover. The campaign features six mock covers, which it will share on its website, in email marketing and Instagram. Though the brand does not plan to print magazines, some of the featured topics will come to life as blog posts and social content. Each cover is tied to a product in TooD’s collection, and the cover lines speak to the larger ethos of the brand. For example, one TooD Talks cover, themed “Vol. 2/Self Love,”  reads, “Star in your own love story.” Another cover, about “Hair Positivity,” features Siadat posing, armpit hair exposed. The remaining four covers center around “[saving] the planet, radical acceptance, activism and non-binary beauty.”

Siadat teamed with Atoosa Rubenstein, former editor-in-chief of Seventeen magazine, founding editor of CosmoGirl and absolute icon of my youth to work on the cover lines, which speak to the immense changes in media directed at young women. TooD tapped a designer who’d worked with Rubenstein in her magazine days to bring the project to life.

The campaign will also include “talks”, the first of which will happen with Katie Sturino (and Siadat and Rubenstein) on Instagram Live, on Tuesday.  Its title is, “Power from pain: how three women are rewilding, reclaiming and rewriting their own beauty narratives.”

An accompanying Instagram filter will allow anyone to “be” a cover star. Finally, the brand tapped 25 Gen Z-ers who will “share covers, product and their own personal take on TooD on TikTok,” Siadat said. The campaign is unpaid, and those posting will receive gifted products from the brand.

Though some Gen Z-ers were not even born when teen magazine covers were prevalent and influential, Siadat noted that Gen Z craves nostalgia, which is why she believes the campaign will resonate. “Their lives have been so serious, in terms of the environment, the political sphere… They yearn for that historical context almost as a way to distract themselves,” she said.

With the campaign, Siadat, who is 41, hopes to explore topics that were taboo when she was growing up. She is a mom of three girls (ages 7, 10 and 12) and has come to think of her role of TooD’s founder as being like “the mama of Gen-Z beauty,” a tagline that appears on her magazine cover. “There has to be an emotional inventory and honesty around discussions, like, ‘Who is makeup for?’ Gen Zers have that fluidity and that openness. They don’t look at gender as allowing you to participate or not participate. They have freedom with makeup and fashion, which very much part of TooD. We don’t believe that you need to watch a tutorial. We believe that we’re all creators.”

For Rubenstein’s part, though a return to the media world seems far from imminent, she emphatically enjoyed the project. “For the first time since I started CosmoGirl, I had the feeling of, ‘Oh, I would do this for free,’” she said. She added that, like CosmosGirl, the campaign speaks to the current “zeitgeist, perceptions and culture.”

For obvious reasons, I was eager to ask her whether she thinks progress has, or has not, been made since she left Seventeen in 2006.

“My 13-year-old has green hair, and they identify as gender-fluid… So, in other words, yes. Y-E-S,” she said. She recalled an award-winning piece that she worked on at Seventeen, about a young person transitioning. “We were doing things that were the precursor to what’s happening today. My kid is such a unicorn. I mean, they aren’t going for a gold star. They’re not looking for anybody to tell them what constitutes being attractive and who they should love or even what they should be into.”

The old cover lines “were very much built to sell magazines on a newsstand, which often tapped into fear-based thinking,” Rubenstein said.

Of course, the magazines I worshipped were made to be sold — of course they were! But still, as Rubenstein said, they had processes and vetting that today’s influencers simply do not. “I have a 13-year-old who gets content from TikTok — it could be a beauty recipe of, ‘Put banana with yogurt, and blah, blah…’ And it’s total crap. And so she’ll do it and be like, ‘Oh, my God, I can’t get this out of my hair.’ And she’ll look at me and say, ‘When you were in magazines, you would put these DIY recipes in there.’ And I’d say, ‘Yes, but we also had people with master’s degrees who were vetting it three times over to make sure it was an A+ before we offered it to our beloved reader.”

“It’s unfortunate, in some ways, that we’re relying on commercial brands to be providing this kind of curated content. But at the same time, there are brands that have tremendous authenticity and integrity, who are stepping up to do what media companies have completely abandoned for some reason.”

Out of the last two weeks’ worth of new collaborations, these are some of the most intriguing.

Another to file under influencer brands creating their own collaborations: these delicate, chic towels and bathrobes created by DTC towel brand Weezie and Parterre, the clothing and home brand founded by Julia Berolzheimer (1.3 million Instagram followers, formerly of Gal Meets Glam) and her co-founder, micro-influencer Hanna Seabrook. Shop it here.

27 Rosiers, a Paris-based clean beauty brand sold at Credo, paired up with drag queen Miss Fame (1.1 million followers on Instagram) to create EXTRA/ORDINAIRE, a line of limited-edition, skin care-infused “skin illuminators.” A set of three is $88, while one color is $32. Each little pot, which can be used on its own or mixed into a moisturizer, packs a punch with ingredients like ashwagandha, chamomile, calendula, vitamin C and plant-based collagen. Shop it here.

On the heels of New York Fashion Week, fashion brand PatBo has teamed with Tresemmé, a constant backstage presence at NYFW, on two sets of hair accessories. The “Simply Glam Set” sells for $85, while the “Effortless Luxe Kit” is $100. The accessories, available until they sell out, include a pearl-bedecked headband and a black velvet knotted headband, among other styles. Shop it here.

Football player Kayvon Thibodeaux is the new face of Starface