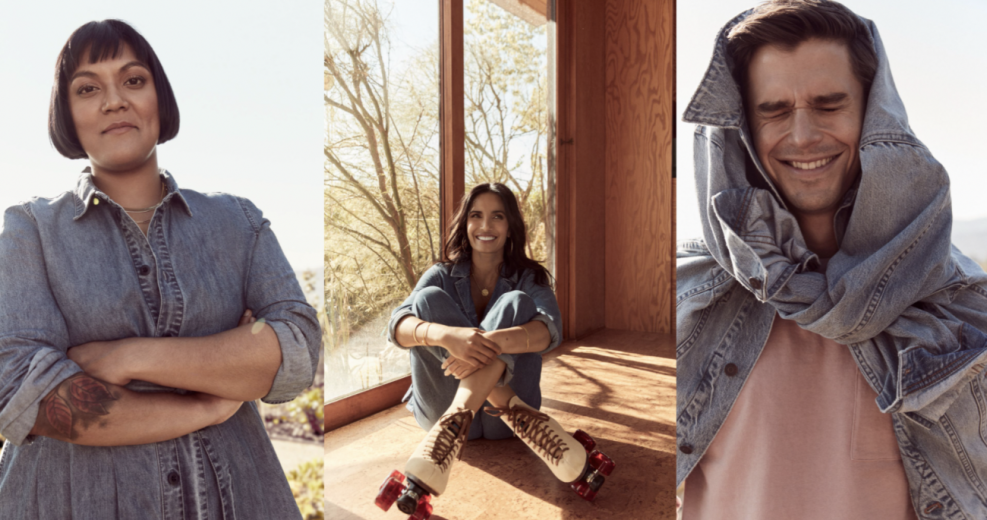 For the past three seasons, Madewell campaigns have asked one question: “What are you made of?”

None of the campaigns have featured traditional fashion models or fashion influencers. In its first iteration, the brand featured actor Issa Rae. Then, last year, expanding on the concept, it tapped comedians Chloe Fineman, Phoebe Robinson and Hasan Minhaj. Now, for its third iteration, the spring 2022 campaign, Madewell has linked with culinary stars Padma Lakshmi, Antoni Porowski and Sohla El-Waylly.

Since its original inception, the campaign has spoken to the “emotional connection” people have with Madewell, said CMO Derek Yarbrough. “We think there’s a strong connection between self-expression and creativity. We stand for denim, and we believe that denim is the perfect canvas for self-expression.” Repeating the campaign concept with different talent in different industries has allowed Madewell to play on these key facets of its brand identity in multiple ways.

The connection between the food world and the apparel brand is more organic than it may seem. If you look at Madewell’s Instagram page (which has 1.4 million followers), you’ll find a “Recipes” highlight, which dates back 84 weeks and features recipes from chefs including Fany Gerson (of La Newyorkina and Fan-Fan Doughnuts) and Hawa Hassan of the Food Network, as well as philanthropic collaborations with No Kid Hungry. In celebration of this campaign, Madewell will make a $50,000 donation to the organization. Plus, the food world was full of rich metaphors that already worked for the brand’s “What are you made of?” concept — for example, the “ingredients” that make up a person’s identity.

“We have a customer base who is aware of what’s happening in fashion. But we also have a ton of customers who probably don’t identify as fashionistas. [We want to] understand where our customers are spending their time. And what are their interests? And [they have] a lot of interests outside of fashion. They have a lot of interest in food and travel and home, and she’s an avid reader. So there’s a rich territory of people we can tap into, to showcase this core idea of creativity and self-expression, that we stand for,” Yarbrough said.

Working with ambassadors outside of the traditional fashion space also helps give the campaign a sense of relatability. For example,  when speaking about her own fashion journey, El-Waylly said, “I never liked my body and used to dress to disappear. As I’ve gotten more confident in the kitchen, I’ve also grown more comfortable in my own skin. I’m not afraid of color or trying to hide my body anymore. You can see it, it’s there, so let’s get that orange jumpsuit you’ve been eyeing for weeks!”

Given that the goal of the campaign is brand awareness, it will live on social media (Instagram and TikTok), as well as commercials on Hulu and YouTube. There are video and photography elements, as well as behind-the-scenes footage that “customers really love to see on social media, versus just the very produced moments,” said Yarbrough.

Past campaigns have proven effective. Yarbrough told Glossy that”paid amplification and marketing investment diversification on social and streaming platforms have helped to drive interest from new-to-brand audiences.” In fall 2021, Madewell saw “a direct correlation between consumers who saw our ads and their increased search intent for Madewell and Madewell products.”

According to a third-party study that Madewell commissioned, “those who saw our fall campaign ads drove outsized branded search growth by 55%,” compared to those who were not exposed to Madwell ad content during this time,” Yarbrough said.