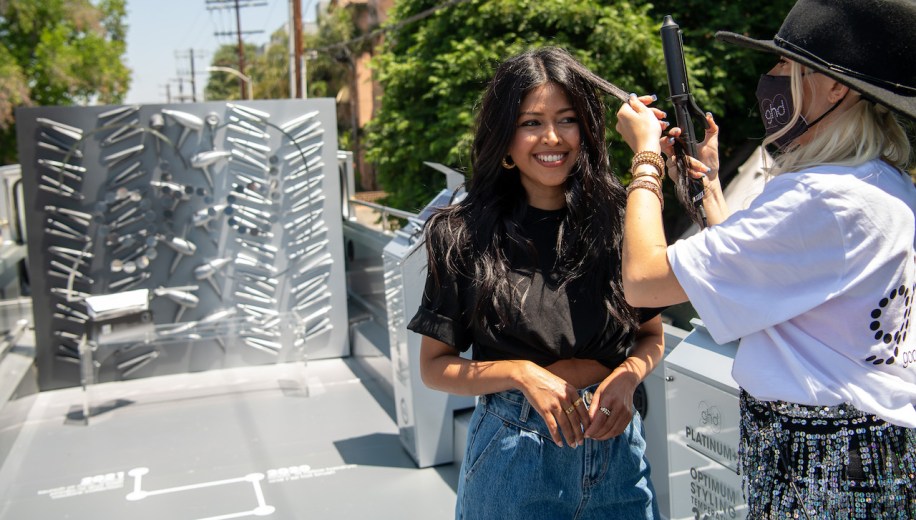 As fewer Covid-19 cases are reported in the U.S. and vaccinations reach a critical mass, going out hair returns.

It was just six months ago, that it appeared that shoppers were seemingly putting down the blow dryers and hair tools for good. Faced with never-ending stay-at-home lifestyles, Kline Group saw the U.S. market for hair tools and appliances decline by 1% in 2020. At the time, a return to normal was not expected until 2023 when the hot tools category is projected to reach modest 2% growth. Even in-salon blowouts and event-esque looks for weddings and proms were depressed as U.S. salon bookings declined by 60% nationwide, according to SafeGraph.

While the overall hair category did grow last year, it was largely due to hair treatments and the larger self-care effect. But, like makeup, which is starting to see a resurgence, going out hair is making a comeback.

Jessica Hanson, GHD North America general manager, said the hair appliance company grew double digits in 2020. She expects that to hold through 2021. “We were very lucky, our business was growing pre-pandemic and has only continued to grow,” said Hanson speaking of North American and every country GHD sells. She credited GHD’s strength to the fact that its hair tools are “not consumables.”

“We’re not going to be a repeat purchase every single month, three months, six months or 12 months. So our products need to do what it says it’s going to do. We live by the warranty that we offer,” she said. Like Dyson, GHD’s blow dryers and stylers sit in between the beauty and home electronics sectors. An entry-level travel-size blow dryer starts at $99, while its most inexpensive flat iron is priced at $149. But GHD did benefit from women educating themselves and gaining more confidence after practicing at home for the better part of a year and a half.
Hanson said 60% of GHD’s business now is in the styler category. “The unique selling proposition for GHD is that you’re going to get professional quality hair at home, and it’s not going to be damaging, so I think it’s been quite empowering for the customer. They don’t have to schedule a blowout and pay $45 with parking to get their hair done, they know how to do it themselves,” she said.
After roughly 16 months of inactivity, Larissa Jensen, NPD vice president and industry advisor for beauty recently called out hair styling products and hair tools alongside fragrances and contouring makeup as making appreciable gains in the first quarter of 2021.
Naturally, GHD isn’t the only company seeing consumer behavior shift in this manner. Sally Beauty CEO Chris Brickman said “going out” categories have picked up at the retailer.
“Styling tools and styling [products], all the things you need when you’re going to go out to a rock concert or go a bar, those categories are starting to pick up again,” he said. Brickman said he saw the first signs of recovery in hair tools at the end of February when mass vaccinations began. That continued in March, thanks to a stimulus bump, through now.
The same is true over at Ulta Beauty. Nick Stenson, svp, store and services operations, said the first stopping point for consumers over at Ulta Beauty is its salon. “There’s a lot of excitement, enthusiasm about getting back to the salon,” Stenson said, citing that 44% of consumers are more than ready to take the plunge.
According to latest Axios-Ipsos Coronavirus Index, venturing out has normalized considerably in the last few weeks. 66% of Americans saw family and friends in the first week of June and 61%, went out to eat. Both of these figures are up three percentage points from before Memorial Day and represent the greatest level of out-of-home activity since the start of the pandemic.
Haircuts and corrective color — especially since shoppers were DIY-ing for so long — are the most requested treatments, but Stenson said largely that consumers see the salon as a moment for self care. “They’ve spent a lot of time this last year educating themselves, but they are eager to break that and build the basket again with products and tools,” he said. Stenson said blow-drying one’s hair at home remains a persistent challenge, so Dyson’s products have seen sales success as well as multitasking blow-dry brushes and irons.
Individual salons too are reportedly seeing a bump in going out looks, but some of the original blow dry bars, known for these event styles, have had a fragmented reopening schedule. Dry Bar, for instance, still lists its 99th Street Upper West Side location, among others as closed on its website due to Covid -19. Dry Bar operates largely as a franchise model; a spokesperson said the company is nearly 100% open in NYC, “working to get the few shops open that are closed.” She did not detail the fleet’s national reopening status.
While Stenson is only now seeing the return of wedding, event and date night hair looks at Ulta Beauty, many shoppers seem especially keen on not having to do the work themselves. Extensions particularly have been a draw especially, since that is one treatment tough to DIY.
Over at GHD, it is banking on an extensive brand awareness campaign to remind people about going out and buying accordingly. For awards season, GHD resumed its partnerships with celebrity stylists like Gregory Russell with Anya Taylor Joy for the Golden Globes, Bryce Scarlett with Margot Robbie and Jenny Cho with Carey Mulligan for the Oscars, and Jenny Cho with Addison Rae for the MTV Movie Awards. In May, it also hosted a double-decker bus tour in Los Angeles with influencers to celebrate its 20th anniversary and announced influencer Chiara Ferragni as its international brand ambassador in June. The company plans to do more regional activations in hotspots like New York and California.
“We have to build those word of mouth recommendations to get people to buy the first time and then a second or third,” she said. “We’re trying new things, getting into the [communities], working with more influencers, stylists and celebrities, and reminding people to back to normal.”
Reading List

The beauty industry makes a play for outer space.

The Center’s Ben Bennett argues that the beauty market is not saturated on The Glossy Beauty Podcast.

Caroline Hirons can make or break a beauty brand.

Unilever has signed an agreement to acquire Paula’s Choice.