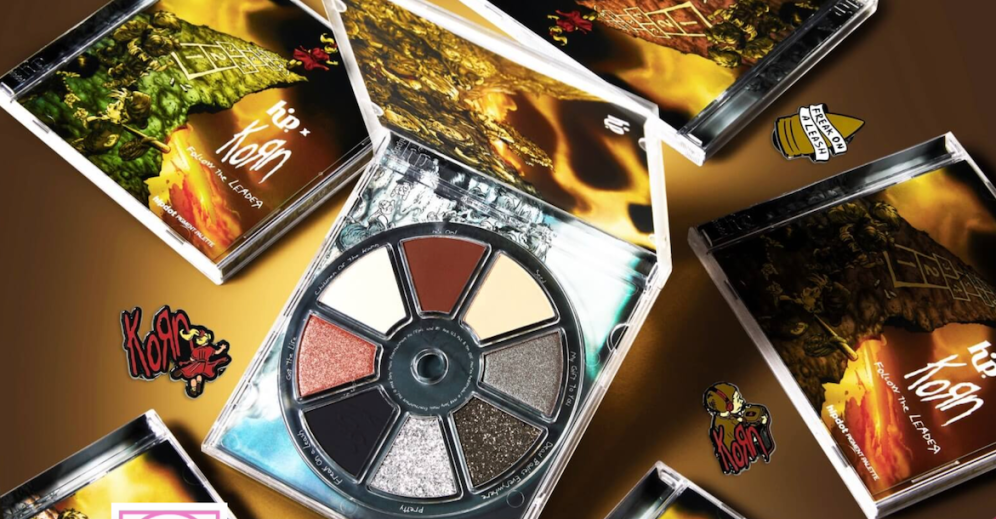 For indie makeup company HipDot, collaborations have become the bread and butter — and there’s no shortage of inspiration.

Since launching in 2019, HipDot has done makeup collaborations about ramen noodles, SpongeBob, “The Addams Family” and even the Monopoly board game, to name a few. But it has also developed a specialized niche for music-themed beauty collabs, following its runaway success in 2020 with emo rock band My Chemical Romance. On Tuesday, HipDot released its latest version of music-themed beauty, with two eyeshadow palettes shaped like CDs for the rock bands Evanescence and Korn.

“Music and makeup are the perfect matches because they’re both about self-expression,” said Jeff Sellinger, HipDot’s co-founder and CEO. “Music evokes moods and feelings the same way beauty does; being entwined [with emotions] gives us the ability to connect those experiences.”

Sellinger declined to comment on HipDot’s revenue, growth or fundraising. Glossy last reported in Dec. 2020 that HipDot had seen a 300% increase in revenue that year and previously received $2.5 million in seed funding in 2019. The collaborations with bands are licensing deals, but the brands are actively involved. Korn promoted the collaboration on its channel, and as of Tuesday’s launch date, the palette is already sold out. Both bands also weighed in on creative, product and communications materials, according to HipDot.

Referring to the palettes as “collectible experiences,” HipDot wants to bring the immersive element of albums to its shopper. Sellinger said that album artwork and color schemes have a long history of making music more than just auditory. But those elements have been lost due to the reduction of music albums and discography into downloadable MP3s and streaming. In the case of Korn, its “Follow the Leader” album cover features a child playing hopscotch toward the edge of a cliff and a gathering of kids waiting to follow. Palette colors are earth-tone browns and gunmetal shades. Evanescence’s “Fallen” album is an up-close photo of the band’s co-founder and lead singer, Amy Lee, taken on her 21st birthday. The palette colors feature a variety of blues, grays and black.

Much of the inspiration for HipDot’s new palettes came from the wild success of its My Chemical Romance collection. Even though the mid-aughts punk group hasn’t released an album since 2010, when My Chemical Romance was announced as a partner on HipDot’s Instagram, die-hard fan comments flooded a Dec. 9 post. That post received over 185,000 views and 3,600 comments, even though the HipDot Instagram only had 166,000 followers at the time. The collection featured a standard nine-shadow square palette, a liquid eyeliner and a double-edged eyeshadow brush.

A unique aspect of the My Chemical Romance product launch was HipDot’s collaboration with fans on marketing materials. It solicited from fans makeup looks inspired by the band and the palette, plus it tapped photographers who were fans for unique photoshoots and reposted comic strips about the makeup on its social channels, for example. HipDot followed up on the initial collection with another, centered on My Chemical Romance’s “Danger Days” album, in July 2021. A “The Black Parade”-inspired palette launched in July 2022.

“What’s [helpful] is when a band creates a story around an album, which MCR does very well. There’s a whole world, and that gives us more to work with,” said Mo Winter, co-founder and CMO of HipDot. “Although super fans are not your typical beauty influencers, they love to tell the story of a band, and it’s very authentic. It keeps [us] from becoming generic and talking too much about ourselves.”

For the Evanescence and Korn palettes, HipDot will use similar marketing strategies, meaning it will solicit fans to share makeup looks and work with photographers who are existing band fans, for example. Sellinger said he believes there is more opportunity for music collaborations in the beauty space. HipDot previously launched a five-product line with Kesha called Kesha Rose in 2019. According to the fan website Keshapedia, the beauty line was no longer available for sale as of Dec. 2022. Sellinger declined to comment on why the line is no longer available, saying HipDot put out a “great experience.”

“Consumers want more than just putting logos on stuff,” said Sellinger. “They want to connect with [products,] and that’s what we try to do by going deeper and bringing out the [artists’] DNA.”