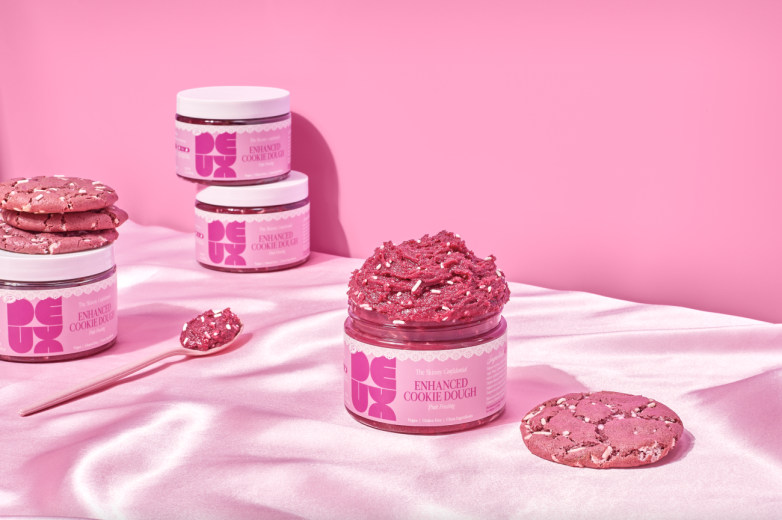 Most of the brands I follow closely sell lipstick, skin care, sweaters or bags. But since its 2020 launch, I’ve been obsessed with the trajectory of one brand that sells products that cannot be worn and require refrigeration.

I’m talking about Deux, the “better for you” cookie dough brand that’s become as omnipresent on social media as the Dior Lip Oil.

Sabeena Ladha, 32, launched Deux in October 2020. Ladha grew up spending time in her father’s gas station in Euless, Texas, where she’d snack on junk food. As an adult, she worked in marketing at PepsiCo and in a number of other roles at food and CPG brands. At the same time, however, she found herself growing interested in wellness. In 2012, Ladha became a certified pilates teacher and started a blog. Eventually, she went on to work at McKinsey, before deciding to pursue Deux during the peak of Covid lockdowns. “The idea of Deux came to me during the pandemic when LA was on lockdown for quite some time,” she said.

Deux, pronounced “dough,” makes “enhanced” cookie dough, according to the company. Purchased from the brand’s site, a jar is $16. The flavors feature different blends of healthy, wellness-forward ingredients. For example, you’ll find ashwagandha, an adaptogen said to be beneficial for managing stress, in the brand’s Birthday Cake dough flavor. Deux does not message itself as a “clean” eating brand and is sold at retailers ranging from Erewhon to Target. It intentionally strays away from calorie-counting-type messaging — though it does show it’s comparison to traditional raw cookie dough, with “25% less sugar and 35% less carbs.”

“We’ve taken out all the bad-for-you ingredients — animal byproducts, preservatives, refined sugar — and we’ve added in good-for-you functional ingredients,” Ladha said, but noted that the brand is not trying to be a supplement.

To get the idea off the ground, Ladha used her own $20,000 to test the concept. Just two months later, by December 2020, the brand was “bursting” out of its commercial kitchens, she said.

And that point, she was doing it all on her own. “I would make the product until 3 in the morning, wake up at 7 a.m. to fulfill the product and then go drop them off [in ice packaging] to UPS,” she said.

In July 2021, the brand filmed for “Shark Tank,” where it ultimately did not strike a deal but did gain from the show’s vast exposure.

Soon after, Ladha set her sights on investment, raising $1 million from “a combination of CPG execs in the biz, former founders and small funds” in just a week. It was a good time to raise money, and the brand was in a unique position, Ladha said. She already had a product for investors to taste test, as well as data about it, including repeat purchase rates.

The brand closed its first year having done $1.2 million in sales and starting to launch in retailers. It is now sold at Whole Foods, in addition to Erewhon, and will launch at Sprouts in just a few days. It is on track to increase sales by 400% this year.

Since a couple of months into its launch, Deux has leaned on collaborations with other cool brands and people to expand its reach. In April 2021, it collaborated with influencer-podcaster Amanda Hirsch (@notskinnybutnotfat, 695,000 Instagram followers). When Hirsch tried and posted about the product, “people were buying like crazy,” Ladha said. There was an overlap, it turned out, between Hirsch’s pop-culture-obsessed fans and people who want to buy cutely-packaged, vegan, gluten-free cookie dough.

Ultimately, Hirsch had the idea to collaborate in a greater way. Ladha suggested teaming on a new flavor fortified with biotin and vitamin B12, which are good for moms before or after having a baby, as Hirsch had just given birth. The collaboration was a success, prompting Ladha and her team to lean further into the collab opportunity.

In March 2022, Deux collaborated with skin-care brand Summer Fridays, founded by influencers Marianna Hewitt and Lauren Ireland. Together, they developed a limited-edition flavor, Vanilla Cloud Birthday Cake, with skin-benefitting ingredients like aloe vera and vitamin C. The launch was bolstered by the followers of Summer Fridays’ founders: Hewitt has 1.1 million Instagram followers, Ireland has 297,000.

A collaboration with fitness-focused Instagram account Sweats & The City (119,000 followers) followed in August. And another — dubbed Pink Frosting and created with Lauryn Evarts Bosstick (1.1 million Instagram followers) of the podcast “The Skinny Confidential” — launched in September. According to Deux’s website, the Pink Frosting flavor’ features “pomegranate and dragon fruit’s ingredients “fight puffiness & aging.” The launch resulted in the company’s second-best-ever sales day, second only to when its “Shark Tank” episode aired in November 2021.

In November, the brand launched a collaboration with fragrance brand Dedcool, founded by Carina Chazanas. The companies came together to create a $12 lip balm in the flavor Chocolate Chip Cookie. “Dedcool and Deux have a lot of synergy. Both brands follow the same ethos [and are] sold by everyone’s favorite fancy grocery store, Erewhon,” Chazanas said.

Collaborations have paid off. Ladha said customers who’ve discovered Deux through its collabs have become some of its most loyal. “These cult-fans, who are obsessed with the brand,” she said.

Ultimately, some alchemy of Deux’s cute packaging, fun product and wellness ingredient-focused marketing has allowed it to transcend the grocery aisles in a way not many food brands do — even the ones sold at Erewhon.

“The food industry is pretty traditional,” Ladha said. “But we’re bringing what she wants — from beauty, wellness and fashion — to food, to sex it up a little bit.”

She added, “Consumers [care about] packaging, and they like shelfies and nice products. They like the feeling of being connected to a brand and wanting to show it [off].”

“When you’re listening to a beauty influencer talk, she’s telling you what the vitamin C in her serum does — she’s talking to you about the ingredients in it. It’s the same thing with Deux,” Ladha said. “The beauty consumer cares so much more about the product’s ingredients and what it looks like. Being able to do that with a food product is fun.”

Social media — and especially TikTok — have accelerated the pace of the trend cycle. So this week, digital trend forecasting agency Spate examined the top three trends in makeup, hair and nails, based on search across search engines. Unsurprisingly encompass TikTok viral moments like “siren eyes” and “Hailey Bieber nails.”

Yarden Horwitz, Spate founder said, “Consumers are embellishing on the classics, seen in the shift from winged liner to siren eyes, and from curtain bangs and mullets to layered ‘bixies’ and butterfly looks. Consumers are innovating at every turn, finding new ways to stand out.”

In the makeup category, she noted, sparkly gems remain hot. “Trending brands like Donni Davy’s Half Magic are capitalizing on consumers’ love for makeup embellishments and shimmering touches,” Horwitz said. And in the hair category, consumers are “craving more movement and volume, regardless of their hair’s length.” Finally, when it comes to nails, “they’re adding chrome and crocodile textures, and still showing interest in experimenting with color for French tip nails.”

How brands are making e-commerce feel like social media

Shannon Abloh is ready to talk

The year in viral celebrity fashion