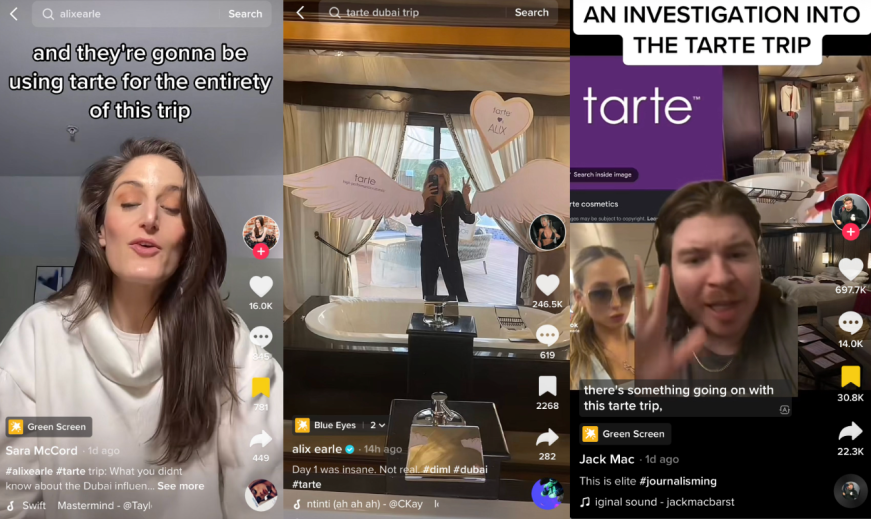 The women flew on Emirates — in business class — and they’ll depart from Dubai on Saturday, concluding the latest #TrippinWithTarte. The brand has become infamous for its lavish influencer trips — it’s now hosted over 20 since 2015 — which have TikTok aghast, questioning how much it’s spending, how it can afford such a trip, whether it’s appropriate in a recession and if it will make the brand feel “unrelatable” to audiences.

Here’s the thing: While social media and influencers — who seem to charge a fee to get out of bed — have surely upped the ante on what brand trips look like, they have, in fact, always existed. It’s just that, when beauty editors were traveling on a brand’s dime, especially before the dawn of social media — say, on a trip with Chanel, Louis Vuitton, YSL Beauty or even Tarte — the experience wasn’t made available for wide public consumption the way it is today, when it’s influencers being wooed.

But also, brands didn’t see the same ROI they do now. For its part, the hashtag #tartedubaitrip currently has 2.1 million views on TikTok. Barstool blogger Jack McGuire (AKA Jac Mac on TikTok; 397,000 followers), for one, has posted numerous times “investigating” the trip.

Meanwhile, TikToker Sara McCord (1,185 followers) posted a video breaking down why the trip makes sense to her as a brand strategist.

Maureen Kelly, who founded Tarte Cosmetics in 1999, exclusively spoke to Glossy to clear up the many, many questions people are asking about the trip.

Of the loud response, she said, “This isn’t our first trip, but I can, of course, understand how people may have a knee-jerk reaction to seeing content overload like this.” That said, Tarte has, for a long time now, prioritized putting its marketing budget into building relationships with influencers, Kelly said.

“Every day, brands make decisions about how to spend their marketing budgets. For some companies, that means a huge Super Bowl commercial or a multi-million-dollar contract with a famous athlete or celeb. We’ve never done traditional advertising, and instead we invest in building relationships and building up communities,” she said. Kelly declined to share Tarte’s total investment in the trip.

“I have to laugh at some of these conspiracies. I will say, people are creative! But no, I can confirm that we definitely didn’t have help from any tourism boards,” she said, in response to a theory stated in multiple TikToks. People posited that the brand partnered with Dubai’s tourism board to sponsor the trip. Tarte did, however, partner with Sephora Middle East.

Much TikTok commentary has also spoken to the sheer cost of flying to Dubai. McGuire’s video said a first-class Emirates ticket would cost $22,000. “As someone who has taken countless trips overseas in an economy middle seat, I certainly understand the sentiment,” Kelly said, “But you also have to consider that we’re inviting people to take time out of their jobs and life, and get on a long-haul flight for a quick, three-day event. That can take a toll on anyone, no matter how excited you are for a trip. We want to make this a seamless pleasant and experience for everyone.”

Other TikTokers, including those who work in beauty or influencer marketing, have done rough tallies of the cost of such a trip, considering the rate of staying at the Ritz property. According to its website, it starts at around $1,000 per night. Many have remarked that, when you consider what these creators charge for a single video, Tarte is, perhaps, the smartest beauty marketer around. As a reminder, this is also the team that sent 30,000 sorority hopefuls products, thus dominating #RushTok in August 2022.

As for why Tarte spent hundreds of thousands of dollars taking creators to Dubai, the short answer is: a new foundation — an upcoming launch, dubbed the Maracuja Juicy Glow Foundation ($40). Shoppers can join a waitlist on Tarte’s site now, but the product won’t be available until February 10. The formula took two years to create, and is one Kelly is especially passionate about. “[It offers] the perfect balance between gorgeous, glowy, juicy skin and dewy, radiant coverage — its juicy skin in a tube, for that viral clean glow everyone wants,” she said.

According to a Tarte representative, this trip is just the beginning of what the brand will do to market the new foundation, but they declined to reveal further plans.

#TrippinWithTarte, as Tarte has dubbed its getaways, is not just about the free airfare, meals and stay. It has also become known for its room “drops.” Not only is every attendee’s room covered in hundreds of Tarte products to use throughout the trip, but it’s also filled with gifts from other, likeminded brands, many of which Tarte has now partnered with for years. These brands provide the products for free — it’s an opportunity for them to gift the notable, influential guests. In Dubai, the closets appeared fully stocked with clothes — attendees posted that they could have come empty-handed.

“I’m actually very proud of this. We partner with tons of small businesses, many of which are female-founded, like The Post and Electric Picks. … This is a great opportunity for them to share their talents with their favorite influential people,” said Kelly.

Though it is true that some influencers and celebrities are paid for going on free trips, Tarte does not and has never paid its attendees — even Alix Earle. “We don’t require anything nor do we pay anyone to attend,” Kelly said. Rather, Tarte makes its trips so inherently rife with natural beauty (the camels! the desert! Jeep excursions!), glamour (first-class flights! villas at the Ritz! entirely new wardrobes!) and exclusivity (a small group, with first looks at new Tarte launches!) that a content creator just can’t help themselves. It’s a masterclass in creating brand affinity.