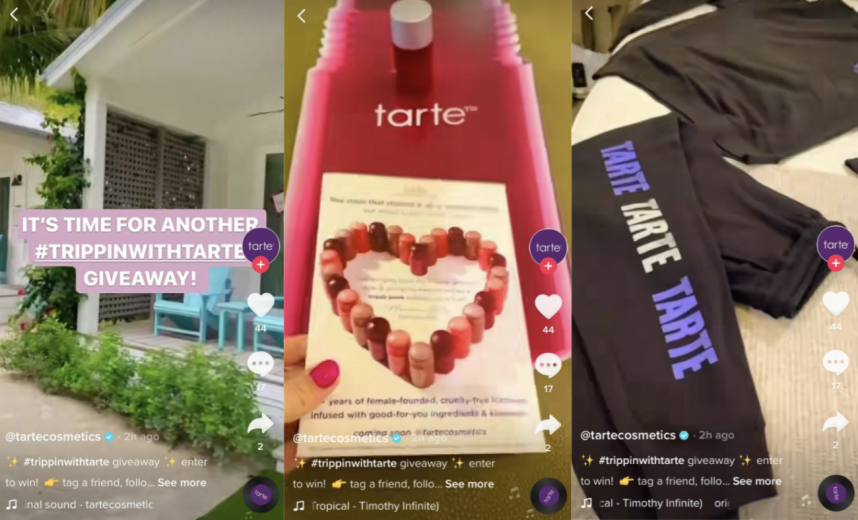 Tarte takes on TikTok with a dedicated influencer trip

Since 2015, Tarte has flown editors and influencers around the world, using one successful hashtag to document the trips: #trippinwithtarte. Past destinations have included Hawaii, Costa Rica and Bora Bora. On Instagram, the hashtag has over 22,000 posts. On TikTok, where brand hashtags are often co-opted beyond their origins, it has over 10 million views. The brand itself has 9.9 million followers on Instagram and 814,000 followers on TikTok.

When Tarte started these press trips, it worked with beauty influencers. As time passed, it started to invite lifestyle influencers — often moms who post about affordable fashion finds, the food they feed their kids and makeup.

The trips have become a “thing.” Tarte partners with like-minded brands on “room drops,” essentially making each guest’s room feel like a personal gifting suite. And every corner of the destination is ripe with TikTok opportunities — including a dedicated “TarteTok” station. On this trip, taking place in Key Largo, Florida from March 14-17, the TikTokers will find gifts from Set Active, Abercrombie & Fitch, Swell and Bauble Bar, among other brands, in their rooms. Though posting is not required, gifting comes with a likely reward in terms of exposure and, potentially, social media tags. The brand also hosts a giveaway, awarding one lucky follower the same set of swag.

This week, Tarte is reverting to its initial strategy of working with beauty influencers, but this time, they’re all primarily known from TikTok. The group of 16 TikTokers includes some heavy hitters, like Meredith Duxbury (14.7 million followers), Victoria Lyn (5 million followers) and Stephanie Valentine (aka Glamzilla, 1.4 million followers). Tarte prides itself on its relationships with these content creators, who founder and CEO Maureen Kelly called part of the brand’s “family.” None of the attendees have ever attended a #trippinwithtarte before, nor were they paid to attend the trip, though Tarte pays for the trip itself (travel, room, board) and invites each influencer with a plus-one. The guests are not required to post — though the scenery, the swag and the nearly endless supply of makeup make doing so just about irresistible.

This trip celebrates the limited edition re-launch of Tarte’s first-ever product, Cheek Stain, originally launched in 1999. The iconic product is coming back in three of its original shades for six months only, though Kelly said that fans of the brand may demand a longer window of availability. Judging from the comments on any of the teaser posts on Instagram, they will.

“Traditional events were starting to feel and look the same. So first and foremost, we wanted a way for creators to be able to interact with our products, our team and Maureen in a more meaningful way,” said Samantha Kitain, Tarte’s CMO, who has been with the company since 2012. “We’ve always relied on influential people to drive awareness — whoever were the most influential people at the time,” Kitain said, noting that the brand has never relied on traditional advertising.

Tarte has few peers when it comes to trips of this scale. Revolve started hosting its influencer trips, with the hashtag #revolvearoundtheworld, in 2014. Though countless other brands have launched influencer collaborations and put marketing budgets into paid partnerships with influencers, few have consistently taken them on days-long vacations.

Tarte executives did not disclose whether or not it sees a spike in sales based on the trips, but they did stress the high value of the resulting UGC and relationships built.

And though this is Tarte’s first #trippinwithtarte solely with TikTokers, the brand was the first beauty brand on Musical.ly before it was acquired by TikTok. Clearly, Kelly has always been an early adopter of new platforms.

“In the early days, I started something called Tart Talk, which was a blog on our website. That’s how we interacted with customers. They could go on a forum, like an early Reddit,” Kelly said. As social media evolved into the baseline form of communication it is today, she immediately recognized the opportunity to communicate with Tarte’s customer base, which the brand refers to as Tartelettes. Instagram remains a primary avenue of communication between Tarte and its customers.

“We’re a product of the relationships we build with our influencer community,” Kelly said. “Influencers are an extension of our brand, showing how to use our products. At Tarte, we only use real people in our campaigns, not models. Our customers can identify with real people.”

The brand considers itself “social first,” meaning it’s always “searching for the next new or innovative way to meet our customers where they spend the most time,” Kitain said. “That’s how we knew very early on that influencers were going to have such an impact on the industry — because of their authenticity and their relatability to real people. We leaned in hard right away. We saw it and went for it.”