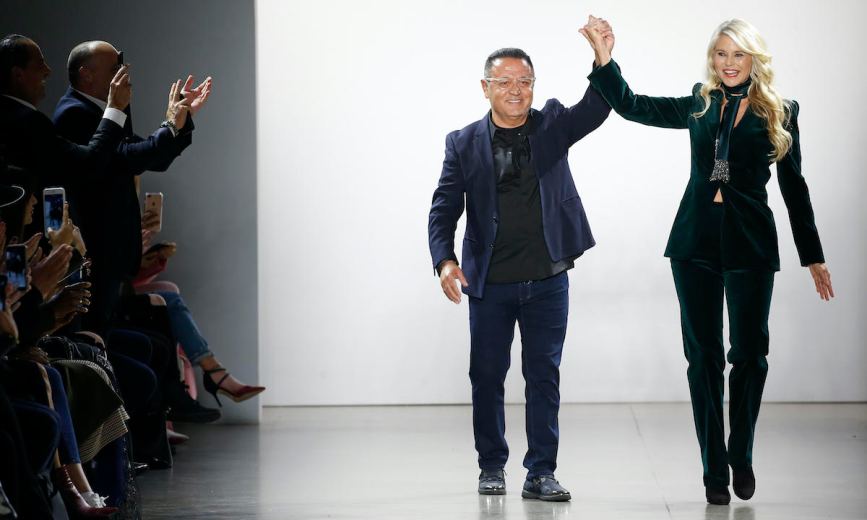 Nearly 50 years after founding his namesake fashion company, Elie Tahari is telling his brand story. The move comes just as his company embarks on a new chapter that’s free of wholesale partners.

The designer is the subject of a new documentary, “The United States of Elie Tahari,” now available to view on Vimeo through the end of the month. It chronicles Tahari’s career path, which reads like the traditional American dream: After moving from Israel to NYC with $100 in his pocket, and subsequently sleeping on Central Park benches, before establishing a global brand that sold at 600 stores in 40 countries.

“My first retail partner was Bloomingdale’s [in 1989],” said Tahari. “They gave me a small space, and it became the most profitable business they had, based on sales per square foot.” Soon after, Saks Fifth Avenue, Bergdorf Goodman, Neiman Marcus and Nordstrom bought into the brand. “By selling very well on the floor, the other [retailers] find out about it, and they all come to you,” he said.

Elie Tahari, including its licensed products that include footwear and eyewear, reached its projected $1 billion in sales volume in 2019, according to the company. That included $200 million via retail channels.

But then the coronavirus hit. Many brands were forced to lean on their own sales channels, with retail partners leaving them high and dry. Elie Tahari came to realize the benefits of going it alone and decided to do so on a permanent basis. As brands have explored new sales options, department stores have also updated their business models to be less reliant on them. For example, Hudson Bay Company has launched co-working space SaksWorks, which has locations in its Saks stores.

“The [department] stores wanted to return goods and cancel orders, and they weren’t paying their bills. So we stopped doing business with all wholesale,” Tahari said. “We were forced into it, and it was a shock to the system. But it was one of the best decisions I’ve made in the past decade.”

He added, “I don’t think anybody today could launch a business by starting [exclusively] with department stores. It can be very unprofitable.”

Elie Tahari is now exclusively selling DTC and is in the process of closing its wholesale division. The plan is to open more stores, on top of 11 existing stores that include five outlets, and to expand its e-commerce capabilities.

The new setup is a good fit for Tahari, who said he now “[doesn’t] believe in retail” and has “never belonged” to the fashion community, preferring to do his own thing. That’s despite the fact that the brand has sporadically shown at New York Fashion Week, with spring 2020 marking the last season it hit the runway. What’s more, fashion insiders Fern Mallis, Nicole Miller and Dennis Basso, among others, are featured singing his praises in the new film.

“I’m working harder and with much more pleasure than I’ve ever worked,” he said. “Before, I had the big company and the huge wholesale business. There was a lot of pressure from outside. But I’m fully concentrating on the clothes now, and the end result is so much better.” The company declined to share sales projections for 2021.

Despite past distractions, Tahari said he’s always listened to the customer versus the retailer, seeking direct feedback on details including styles’ fit, price and design details. And, he said, he never waited for buyers’ approval before going into production. “I’d cut without orders, and then they’d come and they’d buy it.”

As such, the brand’s styles are currently at their most casual. They include hoodies and a dress that mimics a long sweatshirt.

“You can design all you want, but you [also] have to be a merchant,” he said. “I’ve never made an item just because it went with other items in the collection; every item’s got to sell by itself.”

“The United States of Elie Tahari,” directed and produced by David Serero, has been featured in several international film festivals and won multiple accolades. It was part of the Chelsea Film Festival in NYC earlier this month and was named Best Documentary by Cinema of the World in August. Serero manned the whole project, approaching Tahari at an event where the designer was accepting an award in early 2020.

Fashion films have historically served as effective marketing tools, driving both awareness and sales for the brand being spotlighted. For its part, Netflix’s “Halston” series, which debuted in May, resulted in “a huge uptick” of more than 30% in website traffic and social media followers, according to Halston president Andrea Scoli. Likewise, industry reports have theorized that the release of the “House of Gucci” movie, set for prime holiday shopping in late November, will work wonders to boost the brand’s bottom line.

Ellie Tahari’s film has “definitely helped the business,” he said — though he called getting his story out there, to both his own kids and his customers, the most satisfying benefit. In the past, the brand’s marketing has focused on the product versus Tahari’s roots or success story.

And film is just one channel he’s excited to take advantage of. “When I started, things were much easier [for designers]. Today, you have different vehicles — you have the internet, you have the online business — and a brand can grow very fast. It’s more difficult, but there are also more opportunities… I may be 69, but I’m not done yet.”