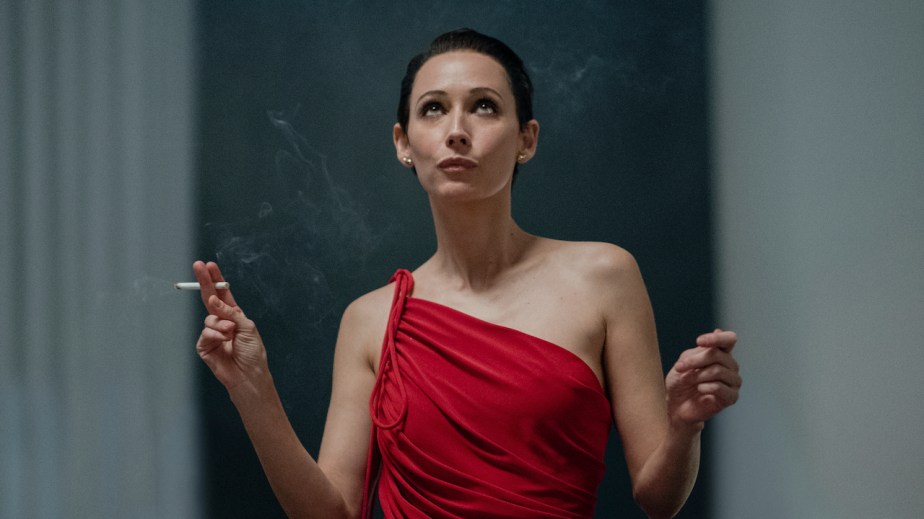 This week, a look at how fashion brands are getting in front of consumers via timely new partnerships and products.

With fashion shows largely on pause for more than a year, Netflix has worked to provide many fashion fans their fix of clothes beyond sweatpants. Now, more brands are strategizing to get in front of the platform’s viewers.

On Monday, the Halston brand will debut on its e-commerce site a 10-piece capsule collection inspired by the archival pieces featured in Netflix’s “Halston” series. The collaboration’s pieces, which will feature a Halston x Netflix label, will be immediately available on pre-order. In late July, orders will be shipped and the collection will launch via additional sales channels: 10 Saks Fifth Avenue stores and 10 Neiman Marcus stores in key markets. “Halston,” which debuted on Netflix on May 14, chronicles how designer Roy Halston Frowick grew his fashion empire in New York in the ’70s and ’80s.

It’s not the first time Netflix has been linked to a fashion brand: In January of 2020, it announced its take on the fashion design competition show, “Next in Fashion,” which drew comparisons to “Project Runway.” Minju Kim, the winner of the first and only season, was awarded $250,000 and the opportunity to launch her line on Net-a-Porter.

Netflix has regularly turned out original programming catered to fashion fans. In 2018, there was “7 Days Out,” a documentary that centered on Chanel and the days leading up to its spring 2018 couture fashion show. And the title character’s statement wardrobe in 2020’s first season of “Emily in Paris,” selected by infamous “Sex and The City” stylist Patricia Field, read as a character in itself. Social and blog posts dedicated to getting Emily’s look rolled out in droves.

With the pandemic forcing stay-at-home orders followed by mass uneasiness around leaving one’s home, Netflix’s viewership spiked in 2020: It broke its record for new subscribers, with 37 million, surpassing 200 million global subscribers for the first time. However, the rate at which it earned subscribers drastically declined in the first quarter of 2021.

TV shows and movies have a long history of driving sales for fashion brands and putting designers on the map — think: “Sex and the City” with Manolo Blahnik, “The Real Housewives of New York” with Jovani and “Fleabag” with its widely-replicated jumpsuit. Viewers of “Halston” are already champing at the bit to score the featured styles.

According to Lyst data released on May 26, the shopping platform saw a 550% increase in searches for Halston pieces in the two weeks after the series launched. Most of the shoppers zeroed in on its dresses. In addition, searches for the signature Halston styles of halter dresses and halter tops saw boosts of 132% and 60%, respectively.

According to a Netflix spokesperson, the company considers the capsule to be a promotional collaboration; it won’t receive revenue from its sales and it has no plans to market it. It started working with Halston and its parent company, JS Group, in February, after the show’s production wrapped in December; Halston creative director Robert Rodriguez first proposed the idea. Netflix provided episodic and behind-the-scenes imagery of the show’s costumes to assist him in the design process. It has not previously partnered with a luxury fashion brand, and the Halston brand was not involved in the writing or development of the show.

Costume designer Allisa Swanson, whose work includes Netflix’s “Firefly Lane,” said she’s seen the buzz and sales that the platform — even its “non-fashion shows” — can drive for a fashion brand. In “Firefly Lane,” she’s featured several small brands, including jewelry by Beads of Aquarius, Bella Rose and Kari Asbury, and lingerie by Vancouver-based Christine. The jewelry was sent to her by The Artisan Group, which specializes in product placement for emerging fashion companies, based on her request for a selection of jewelry styles. Each has received “a ton of press write-ups” in their papers and national digital publications, she said. And she’s been bombarded with direct messages across platforms asking who makes a certain necklace, for example.

“It can be hard starting out as a smaller artist and trying to get people to take notice,” she said. “Having it on Netflix, which is a huge platform, was quite amazing for all of them.”

What Rodriguez proposed to Netflix was a collection featuring modernized versions of the styles in the series. All were offered up to Netflix by the brand from its archive that is typically stored in Upstate New York. The pieces featured were chosen by the series’ costume designer, Jeriana San Juan. For the capsule, they were updated with brighter colors, a newly created batik print and bodysuits “to bring an athletic feel to them,” Rodriguez said.

Having a rich history is a valuable asset for any brand today. Halston has historically leaned into opportunities to hype its past. For example, it regularly posts on Instagram images of its founder and celebrities wearing his designs at Studio 54.

Andrea Scoli, Halston’s president, said that, since the series first aired, the brand’s seen “a huge uptick” of more than 30% in website traffic and social media followers; it currently has 111,000 on Instagram.

“The place they’re linking from most is Wikipedia,” she said. “There’s a whole generation of 20- and 30-year-olds who are just getting introduced to the brand.”

Offering the capsule to “Halston” fans has been a rushed operation: According to Rodriguez, the collection was finished on May 27, and its campaign was shot on Tuesday. The pre-sale model was chosen by necessity — by the time production of the pieces wraps in July, the excitement around the series will have fizzled.

“Everybody jumped through hoops — Saks too,” said Scoli. “You typically can’t say, ‘Hey, I want to do a window in July,’ in May.” Of course, the capsule’s retailers, too, will experience the halo effect of the series.

The collection is rolling out at the right time, in more ways than one: By July, more people will be up for hosting and attending events worthy of a great dress.

Rodriguez alluded to the fact, in general, that Halston wasn’t made for the pandemic era: “‘Very casual’ is not really true to the brand, though we did update the ready-to-wear collection to be a bit more casual,” he said. “Luckily, women are getting dressed up again.”

Halston will be promoting the collection through its social channels and email blasts, said Scoli. It began teasing it via an Instagram post on May 20.

“This has [already] opened our eyes to opportunities that are out there,” she said. “It’s going to be something that brands do more frequently; it’s going to pioneer more collections by Netflix and the other [streaming platforms].”

More brands are getting hip to the Netflix opportunity. Swanson said that, though she’s been working in the industry for 25 years, it’s only been in the last 4-5 years that brands have started to reach out to her and send samples. That’s increased in the past year. Prior, she was charged with making all style requests and was often rejected.

“Brands are used to [working] with stylists for celebrities’ red carpet appearances,” she said. “But there’s not a lot of red carpet-walking now.”

Technology is also elevating the streaming opportunity for brands: “TVs are not 30 inches anymore; people have substantial screens in their homes,” she said. “Plus they can [now] stop, rewind and pause to get a good look at a piece. Or they can see it again and again because they can easily rewatch something. And they can hunt down someone who works in the costume department to find the source.”

Styles that receive the most attention, she said, are those that are worn above the waist — as they’re shown on-screen the most — and pieces that are wearable, yet unique. “Nobody texts me and says, ‘Hey, where did those silver hoops come from?’”

In a perfect world, she said, Netflix would have a marketplace selling the styles featured in its shows. “Though that would probably need to be a whole department, on its own,” she said. Netflix would not comment on any future fashion plans.

Why fashion is championing tennis

From golf attire to tennis staples, classic American sportswear is seeing a renaissance. That’s thanks to fashion brands, retailers and influencers increasingly championing the category’s signature styles via their collections, assortments and imagery, respectively. The pandemic no doubt fueled the trend, as sales of activewear — preppy or not — surged in 2020. Plus, for the most part, making plans of any kind meant finding an activity to do outside. Outdoor sports boomed, with tennis, for its part, seeing a 22% increase year-over-year in American players.

According to the Lyst Index for the second quarter of 2020, Nike’s Court Victory tennis skirt was the tenth-hottest women’s product. The Index ranks fashion brands and products, based on search data, conversion rates and sales, plus social media mentions and engagement. And the trend has only continued to catch on.

May 26 data from Lyst showed that page views for tennis skirts on the shopping platform tripled during the month prior. It owed the increase, in large part, to Kendall Jenner’s Instagram post on May 11 featuring herself wearing a green athletic tank top and matching tennis skirt by Alo. In the 48 hours after she posted the image, searches for the brand’s skirts increased 328%. During the month, Lyst shoppers also increasingly sought out preppy tennis shoes, silk polos (up 71%) and sweatshirts with vintage “tennis club” logos (up 14%).

Brands are leaning into the trend by releasing new, fitting products. On May 6, Cole Haan launched its first sneaker designed specifically for tennis. And Thom Brown currently has a selection of tennis dresses on its e-commerce site. Other brands selling tennis skirts include Tory Burch, Girlfriend Collective and Outdoor Voices, to name a few. Meanwhile, an Instagram search of #tennisskirt reveals 217,000 posts, many of which feature influencers wearing white styles by brands including Nike, Amazon and Shein.

There are also young fashion brands that have clearly made traditional sports uniforms a source of constant inspiration. They include 7-year-old Sporty & Rich, which released two tennis-themed collections, in late April and late May. Included were polos, sweatshirts with retro graphics, sweatbands and scrunchies. There’s also U.K.-based Alex Eagle Sports Club, by creative director Alex Eagle, as well as Casablanca, which launched womenswear in August of 2020. Many of its styles are stamped with: “Casablanca Tennis Club.”

In turn, Net-a-Porter is buying into the category in a bigger way for fall 2020. In its seasonal presentation on May 26, the company revealed that, as sportswear performed “incredibly well” for the company over the last year, it’s expanding its assortment in categories including tennis, cycling and dance. New brands it’s picked up for the season include Full Court Tennis, and it’s set to be the exclusive retailer for swimwear brand Marysia’s debut tennis line.

Lea Cranfield, the company’s chief buying and merchandising officer, pointed to the current intermingling of the wellness and fashion categories. “Our customers [are buying] sportswear across technical, casual and apres [sport categories], and brands are considering shoppers’ [new] relaxed nature when designing their collections,” she said. “It’s allowed shoppers to gently dip their toe back into fashion in a digestible way.”

As for golf, fashion companies including Todd Snyder and Mr. Porter, via its Mr. P. private label, have announced dedicated collections since April. Also in April, Draper James alum Sarah Renwick co-founded Renwick, a lifestyle and golf line for women.

Express doesn’t want to be known as “a store at the mall.”

Factories are raising their order minimums, to the detriment of young brands.

Sales are back to pre-pandemic levels for 62% of brands and retailers.

Rent the Runway is tackling resale.

Etsy acquired Depop in effort to build a “house of brands.”

PVH is moving to an “accelerated recovery phase.”