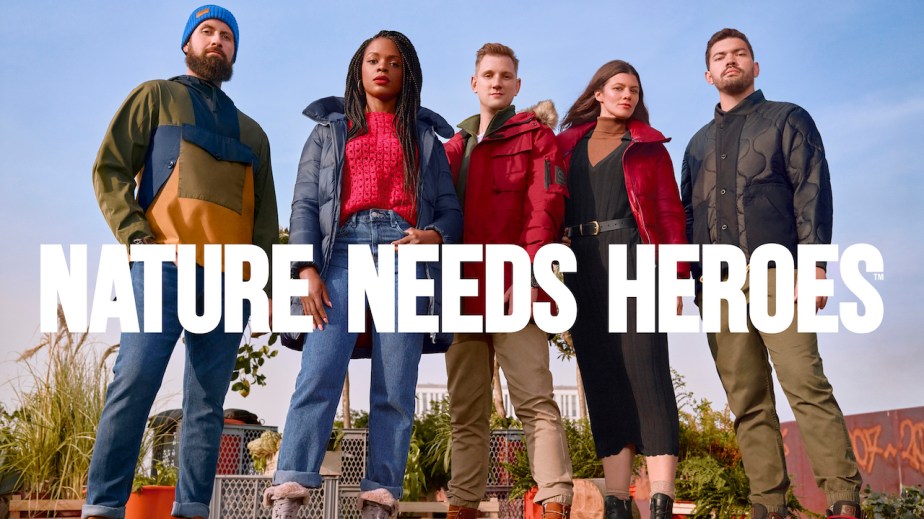 From high fashion to fast fashion, sustainability is top of mind for pretty much all players in fashion today. For legacy footwear brand Timberland, the current challenge is not transitioning to more sustainable practices but instead proving to consumers through its marketing that the brand has been focused on sustainability for decades.

The VF Corporation-owned brand is using its biggest global marketing campaign to date, titled “Nature Needs Heroes,” which launched last week, to accomplish that goal. It will run throughout the year and into 2020. While the brand declined to share spending, this is the first campaign Timberland has activated across the Americas, Asia Pacific and EMEA, said Kate Kibler, vp, marketing and direct to consumer of the Americas for Timberland.

The core of the campaign includes a pledge to plant 50 million trees around the world in the next five years, pegged to new research from Swiss University ETH Zurich showing that restoration of trees is one of the greatest ways to mitigate effects of climate change. Since 2001, the company has planted more than 10 million trees worldwide. For this next push, with a goal of hitting 50 million trees, the brand is partnering with seven global partners including Great Green Wall and Trees for the Future.

“Timberland realized over the last few years  that sustainability is really important to our customers, so we want to make sure we shared that message with them,” said Kibler. That includes the tree-planting initiative, as well as the brand’s other sustainable practices.

Outside of planting trees, Timberland has a collection of shoes made using 500,000 pounds of recycled plastic and rubber each year. Plus, 96% of the brand’s leather is sourced from tanneries that use responsible practices, measured by protocols created by the Leather Working Group. The goal is to reach 100% of leather by 2020. In 2007, Timberland launched its Earth Keeper boot, which, “started a movement in the industry toward sustainable products,” said Kibler.

“You can think about sustainability in terms of end of life, like recycling running shoes, or beginning of life, where you’re preventing thousands of gallons of water wasted in individual garment dying processes. There’s a very broad spectrum to how you can approach it. Ultimately, though, the brand’s message has to be connected with its DNA,” said Erinn Murphy, managing director and senior research analyst of consumer at Piper Jaffray & Co.

To promote the global campaign, Timberland is working with 12 eco-influencers, all making positive changes in their communities. They include Summer Rayne Oakes of @homesteadbrooklyn, Kathleen Elie of @consciouschic and Kevin Espiritu of @epicgardening. The influencers are featured in the campaign — which spans print, digital, social media and outdoor ads — donning styles from the fall 2019 collection.

One of Timberland’s greatest challenges from this point will be keeping up with the sustainable-minded competition, analysts said.

“We have entered into this time where, suddenly, these startups are making it their primary premise to talk about sustainability. They’re out there, and they’re marketing it as a part of their DNA from the start, and so a lot of the bigger legacy companies are struggling with how to talk about it now and what to do,” said Beth Goldstein, accessories and footwear business analyst at NPD group.

Kibler said the brand isn’t necessarily concerned with competition in the footwear space and that this campaign is not in response to the rise of those sustainably minded footwear brands.

“It’s really about sharing with the consumer where our eco-leadership has been for years. It’s not about competing with other brands because the more sustainable the entire industry can be, the better off the world will be. We’re doing this to build community and make sure people understand the benefit of trees and what sustainability means,” she said.

Kibler said that, while the campaign is, of course, designed to sell product, the bigger goal is to get consumers involved, motivating them to plant trees, for example, or just think about how to protect the environment.

In VF Corporation’s most recent earnings report, the company noted that its big three brands (The North Face, Vans and Timberland) drove a 14% increase in revenue from the previous year. For Timberland, specifically, its DTC business grew 10% from the prior year, led by growth in China, Korea and Taiwan — which is another key reason why the brand is taking its campaign global this time around.