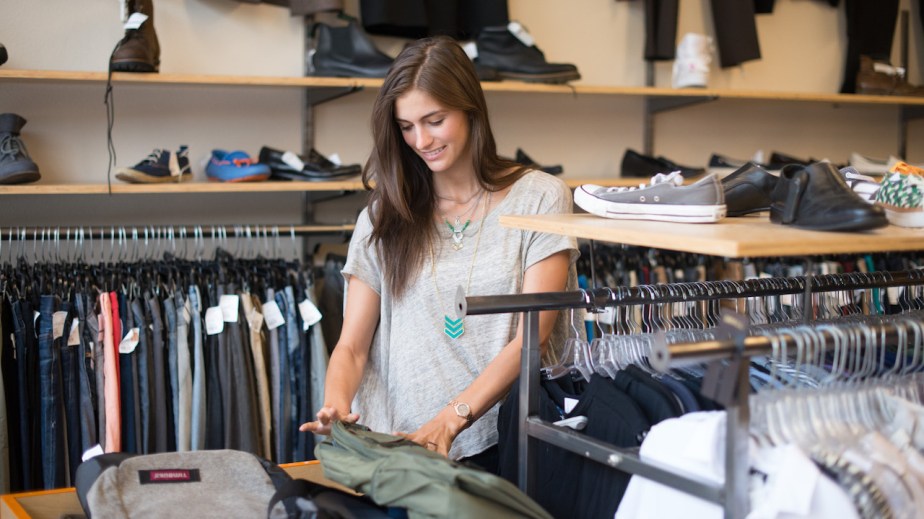 ‘The pie is bigger now’: How Crossroads Trading is staying competitive during the rise of brick-and-mortar resale

The rise of these digital-focused resale platforms, from Rebag and The RealReal to the various sneaker resellers like StockX and Goat, may seem like a problem for Crossroads Trading, a brick-and-mortar-only reseller that has been around for nearly 30 years, but Gina Nowicki, director of marketing and communications at Crossroads, said that’s not the case at all.

“Overall, it has benefited us a lot as a business,” Nowicki said. “Because what these online resellers have done is put a lot of marketing dollars into making secondhand clothing more mainstream. They’ve increased the share for everyone; the pie is bigger now — and people are liking the sustainability of it.”

Crossroads Trading is hoping to capitalize on the growth of the resale sector by doubling down on its physical retail strategy, something that it believes sets it apart from its competitors.

Nowicki said marketing Crossroads as a resale platform that’s distinct from thrift — which has been a goal, considering thrift’s cheap connotations — has also become easier.

“I would say that probably the turning point was with the economic downturn,” she said. “I’ve been with Crossroads since 2007. We didn’t use the word ‘thrift’ ever. We sell contemporary clothing, usually not more than 2 years old. But people were more open to resale during the economic downturn. It became cool to thrift and buy pre-owned.”

Most of the big players in the space today started online-only, like The RealReal, and have slowly expanded into physical retail over the years as it became clear that physical retail is still a valuable sales channel. But Crossroads, which has 37 stores and 500 total employees, has made physical retail its sole area of focus. Nowicki declined to give specific revenue numbers, but the most recent figures available placed the company’s annual revenue at $21 million in 2012.

“A lot of digital brands are starting to move toward physical stores,” Nowicki said. “We don’t have any online business at all. We don’t plan on doing that, either. As the other online competitors come into this marketplace, we want to make sure we address convenience for our customers so that we don’t fall behind — but we find that there are a lot of people who are still looking for that physical experience. They still want cash and trade with no waiting. They want to try things on. When clothes are used and washed and worn, you want to see the condition in person. People still care about that a lot.”

Resellers like StockX have turned to physical retail to entice new buyers and sellers and to streamline some of the processes that can take much longer if conducted entirely digitally — it can take days or weeks for a product to be shipped, received, entered into a system and authenticated before a payment is delivered to a seller. In July, Scott Newman, director of streetwear at StockX, told Glossy that consumers sometimes need the “face-to-face interaction to get across the line” and convert.

“Whether stores are selling their own goods or secondhand items, they’re all realizing the name of the game today is offering an optimal customer experience,” said Corey Pierson, CEO of customer analytics company Custora. “The line between ‘online commerce’ and ‘offline commerce’ is blurring. The same customers who prefer to go in-store to buy apparel might also enjoy browsing secondhand items while they’re there. The same customers who browse secondhand items online might also be interested in seeing similar items direct from brands themselves. The main idea is to meet the consumer where he or she is shopping, and to provide the optimal selection wherever that is.”

Crossroads Trading’s closest thing to online sales is a sell-by-mail option, where customers can ship in their unwanted clothes remotely rather than bringing them to a physical location. Instead, to stay competitive, the company has put all its resources into improving the physical aspect of shopping, opening two or three new stores per year for the foreseeable future and continuing to build out an in-store app developed in 2017, which allows sellers to check how long the selling line is at their local store and add their name to the in-store list remotely, before they enter the store. The seller then receives a text when a buyer is ready to serve them.

For sellers, Crossroads is competitive with newer platforms like The RealReal. Both platforms offer individual sellers 50% of the price their items are tagged.

Nowicki said there’s more than enough room in the resale space for Crossroads to focus on physical retail while competitors focus on digital.

“It’s a tricky thing to do online sales,” Nowicki said. “For us, going online would mean taking on an enormous amount of new responsibilities: taking the clothes online, sorting them, photographing them, storing them, shipping them. We can still get a lot out of physical stores.”