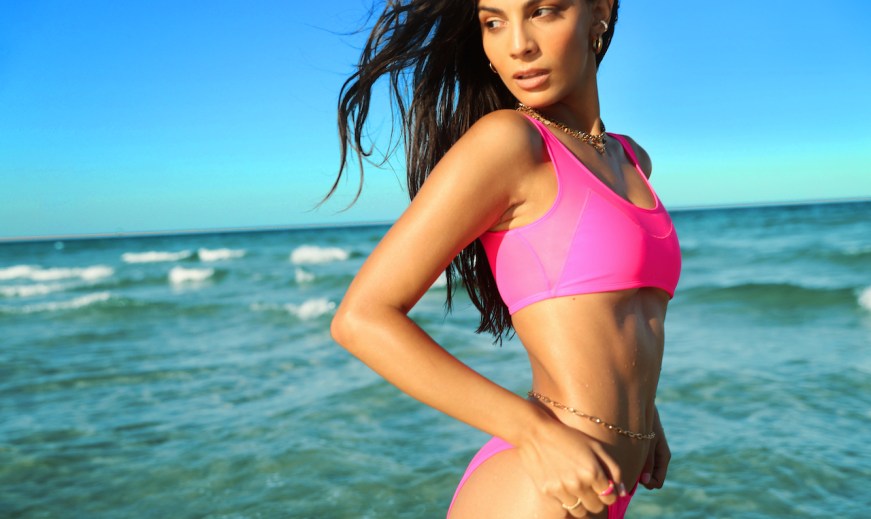 But now, as Covid-19 restrictions open up and the summer heats up the Northern Hemisphere, a curious inversion is happening. Underwear and athletic brands including MeUndies, Adam Selman, Cosabella, Cuup and Everlane have all debuted swimwear within the last three months.  Several of the brands including Adam Selman and Cosabella only began developing swimwear in the last six months.

Swimwear was a $16 billion market in 2020, and analysts expect it to grow to $21 billion by 2025. Thanks to the host of new brands entering the category, those ready to take part in the “revenge travel” trend will have more swimwear options than ever before. As such, competition among swimwear brands is high, according to Jeremy Lowenestein, CMO of MeUndies, which launched swimwear in May.

“It’s a highly seasonal category,” Lowenstein said. “And on top of that, people only tend to buy one or maybe two swimsuits per season. There are a ton of brands competing for a fairly limited amount of sales.”

The upside is that swimwear can be quite lucrative. Swim has a higher price point — MeUndies sells a women’s one-piece swimsuit for around $80, while its underwear goes for around $16 — while being around the same price to produce as activewear, according to Solid & Striped CEO Sarah Landman.

The experience of making underwear also translates quite well to swimwear, several executives said. Cosabella, for example, applied its expertise in extended sizing and support for larger cup sizes in bras to its new swim collection. The brand had sold swim from 2008-2015, but discontinued the line since it was only selling in wholesale and Cosabella was shifting to DTC. Now, Cosabella’s swimwear relaunch is planned for early July.

“There’s a gap in swimwear for larger sizes,” said Guido Campello, CEO of Cosabella. “There aren’t enough styles out there that are supportive the way a good bra is, but doesn’t look like a sports bra. And that’s where we saw a gap and felt like we could make our mark. So as we develop our category, the support for larger sizes will be our first big push, and then we’ll start marketing the other extended sizing we have. We’re doing petite, as well.”

Campello said the preponderance of new and existing brands in the category means brands can’t just launch without a plan. For Cosabella, the extended sizing will be the differentiator and selling point, while for Adam Selman, founder of his eponymous brand, styles that are bolder and sexier than other brands’ will be his signature. Selman is selling his swimwear line exclusively DTC.

“I did not want to do a traditional triangle bikini,” Selman said. “Everyone is doing that. I wanted to do a G-string, because nobody is doing that. Some brands are doing thongs, but no one is really doing a full-on G-string. And that’s our biggest hit so far. I just want to make sure we stand out because it is a crowded field.”

For MeUndies, the selling point is its sustainability story. Every suit is made from recycled bottles or recycled ocean netting. Lowenstein said the brand is marketing its swim to its 300,000 subscription members, but will slowly rev up marketing to non-members over the season.

Adam Selman will be selling his swimwear entirely DTC, as will MeUndies and Cuup. MeUndies raised $40 million in funding in November.

“DTC works best for swim because the seasons turn around so fast,” Campello said. “A lot of DTC brands have exploded in this category. We can’t compete with everyone, but we can do what we know how to do well.”