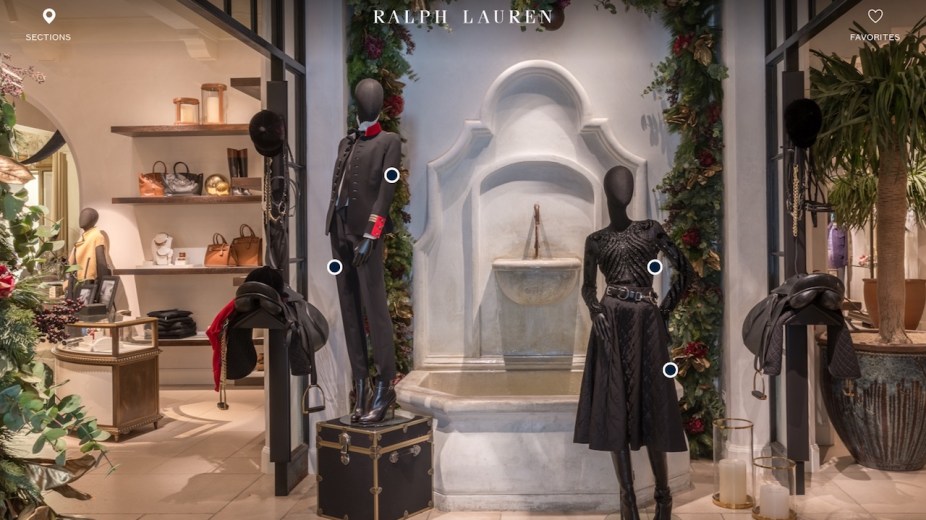 Ralph Lauren ramps up digital investment ahead of the holidays

In preparation for a holiday where consumers will be heavily focused on digital, Ralph Lauren has planned several unique digital launches, from Snapchat integrations to virtual stores to gaming, over the course of the next month.

For Ralph Lauren — which brought in $39 million in its most recently reported quarter, compared to $182 million in the same period last year — embracing digital is an important step toward recouping some of its losses. In the earnings call, CEO Patrice Louvet said that “leading with digital across all activities” is one of the major priorities for the brand, along with attracting a new generation of customers.

“This year, we really wanted to reinvent the holiday season through a digital lens,” said David Lauren, chief branding and innovation officer and vice chairman of the board at Ralph Lauren.

Ralph Lauren’s digital holiday plan includes the RL Virtual Experience. Through either an online portal on the Ralph Lauren website or a Snapchat lens, customers can enter a virtual recreation of the brand’s New York, Beverly Hills, Paris and Hong Kong stores, as well as explore the spaces and shop the items on display. Lauren said the feature was developed in-house and was piloted earlier this year, with the Beverly Hill’s store featured. The other stores were added last week, in time for the holidays. Since the pilot, a brand rep said that online traffic has increased by 10 times thanks to the virtual store, which has received thousands of visitors from around the world every day. All the new digital features have been marketed through emails using a predictive AI system for personalization, as well as paid social ads.

“Translating the cinematic experience of walking into and shopping in a Ralph Lauren retail store to an augmented reality experience was a unique challenge,” Lauren said.

Outside of the virtual store, Ralph Lauren has more partnerships with Snapchat lined up, including what the company has billed as a first-ever combination of AR and fabric. Starting last week, customers can scan using Snapchat the Polo Pony logo from anywhere it appears, including on clothes. They’ll then be brought to various online RL experiences, including e-commerce landing pages and campaign videos, which will change on a rotating basis.

In December, the brand is releasing an online game called Holiday Run, in which its Polo Bear mascot races around to different stores and shows off new product. The game is playable on the Ralph Lauren site and on Facebook Messenger. Later in December, Ralph Lauren will host a live event on Twitch, where a few unannounced popular streamers will play the game live.

Finally, Ralph Lauren is debuting a gifting concierge service through WhatsApp, similar to a service recently employed by Draper James. And, on each of the first seven days of December, it will employ the popular drop model on its mobile app for seven drops of limited-edition vintage pieces.

Altogether, this represents a significant increase in the amount of investment Ralph Lauren has put into digital for the holidays. Online sales have been a bright spot for the company, while other channels have suffered heavy losses. In the first quarter of the fiscal year, online sales grew 3%, while wholesale revenue fell 93%. Notably, the brand’s new digital efforts have been focused on the DTC channel.

The pandemic has revealed for many brands how crucial a strong e-commerce presence is. Analysts are now saying that the holidays are the time for brands to prove the effectiveness of their new investments in making up for the lack of brick-and-mortar sales.

“The initial lockdown brought to light how many retailers had not invested properly in their e-commerce experience throughout the years,” said Durk Stelter, CRO of customer experience platform Linc. “Those investments should be coming to fruition now, and retailers should be starting to focus on the technology needed to provide the best-in-class customer experience.”

The efforts with Snapchat, which Ralph Lauren began partnering with in August, have served multiple purposes, including expanding the brand’s digital capabilities, targeting younger consumers and strengthening DTC sales. Louvet said in an earnings call in an October that the brand added 1 million new customers to its DTC platform in the three months prior, thanks to the Snapchat efforts. DTC in-store sales dropped by 28% year-over-year for Ralph Lauren in the quarter, but that was offset by a 10% increase in DTC online sales.

“Our goal is to meet consumers where they’re experiencing the brand, which is increasingly in the digital space and online,” Lauren said. “One of our key business priorities is to lead with digital and place emphasis on ‘connected retail’. Ideas like bringing our stores to life through an AR experience are just one of the ways we’re transforming and innovating.”