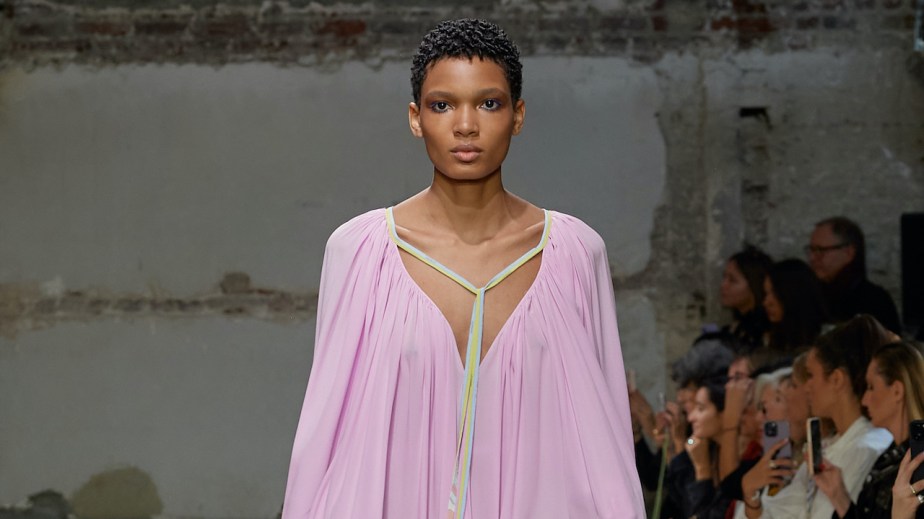 PFW Briefing: How the pandemic is changing the look and distribution of spring collections

In today’s Paris Fashion Week Briefing, as consumers inch closer toward a pre-pandemic state of normal, designers are finding new ways to bring creativity to comfort wear and prioritizing travel-ready products. At the same time, brands are leaning into marketing and distribution opportunities that sprung up in the past two-and-a-half years. Finally, a look at how the model bookings in Paris have compared to those of other fashion weeks this season.

Considering the current economic climate, designers are playing it safe. While most have moved on from collections heavily focused on athleisure and activewear, many have yet to indulge their pre-pandemic level of creativity or abandon their focus on consumer-beloved comfort. That middle ground has taken shape in spring 2023 styles from cargo pants to silk pant sets, both of which are trending. But arguably, based on the collections shown in Paris, it’s knitwear that’s set to rule the next style era.

From crocheted basics to Jacquemus-inspired cardigans, lightweight knit styles have popped up this week in collections by Maje, Nanushka, Sézane and Anne Isabella, among others. And several designers that dabbled in knitwear in prior seasons said they’re upping the focus for spring. Along with being comfortable, knitwear is often produced more sustainably than other styles, further playing into consumers’ current priorities.

“I don’t have a background in knitwear,” said Anne Isabella Rasmussen, founder of Anne Isabella, which hosted a Paris Fashion Week presentation on Wednesday. The brand sells primarily in the U.S., via retailers including Nordstrom and Ssense. “I introduced [knitwear] last season, and I became obsessed with it.”

For spring, Rasmussen created three “knit stories,” she said. Among them are deconstructed knit cardigans that double as lingerie and a collection of knits made 3D via construction.

Likewise, Paris-based designer Milagros Pereda said knitwear is becoming a larger focus of her 3-year-old namesake brand. Milagros Pereda first launched knitwear as a capsule collection. The category proved so successful, it’s now part of the brand’s core collection. And the brand is now fabricating its own wool yarns to create its knit styles.

Pereda confirmed that knitwear both allows her creative freedom and sells.

Home vs. away style uniforms

For many people, more time spent indoors during the pandemic meant the opportunity to make their home a sanctuary. Home decor sales spiked and staying home, even when it was no longer required, became trendy. And that seemed to serve as designers’ inspiration for many of the spring 2023 shows that played out this week.

Brands modeling their presentations after rooms in homes included Homolog and Anne Isabella. Meanwhile, designer Ruohan Nie chose candles as the inspiration for her entire spring collection, which debuted in a presentation on Wednesday. Candles informed the colors and the prints she incorporated, as well as the way she draped and manipulated styles’ fabric.

Meanwhile, other brands — like many consumers — were ready to abandon their homes and embrace travel. Faith Connexion co-owner and CEO Maria Buccellati said the brand will launch swimwear for spring through an exclusive line with LuisaViaRoma — the collection will soon be photographed in St. Barts.

And in its Paris showroom, Maison Kitsune debuted a new print for spring: pin-up girls holding beach balls, inspired by a “West Coast holiday,” the brand rep said. Maison Kitsune will open the doors to its first L.A. store next month.

Finally, on Friday morning at the Leonard show, designer Georg Lux spoke backstage about why he chose the Caribbean as the inspiration for his spring collection — the line is full of flowy maxis and Pucci-esque prints. “Leonard clients love to travel,” he said. “And these dresses are light, so you can pile as many as you’d like into a suitcase.”

On Friday afternoon, at Faith Connexion’s permanent Paris showroom with a view of the Eiffel Tower, brand co-owner and CEO Maria Buccellati talked through Faith Connexion’s current focuses and next steps. Along with establishing new retail partners, the brand is working with more designer collaborators and leaning into web3. Below, a breakdown of those moves, in her own words.

A new retail mix: “During the pandemic, we were not present in the U.S. We had production issues, plus our biggest [U.S.] retailer was Barneys and they closed right before the pandemic. But we just launched at Intermix, online and in all its stores in America.  And now we’re onboarding specialty boutiques including Maxfield and Ikram. We have a very strong following in the U.S. — our biggest following on Instagram is in the U.S. America is very powerful [for us].”

Putting collaborations front-and-center: “We’re being inclusive by getting different designers [involved]. This season, those designers are from Belgium, France and Italy, and that’s [resulted in] three product collaborations. It’s like we have a tribe, and the tribe creates the clothes.”

Innovating with web3: “We’re a brand of the future. We’re a physical-digital brand; we have a 20-year history as a brand that makes clothes, and now we also have the digital side [of the business], where we’re experimenting and putting down our roots. It’s [happening] through an incubator for artists all around the world. They can access our assets and production, and have [the opportunity] to work with our stores. … On Tuesday, [musical artist and influencer] Gavin Magnus will be performing at our [spring 2023] event and wearing Faith. We’ll be showing the collection he wears virtually, along with [selling] NFTs of the pieces; we’ll have digital twins. Everything [we make] can have a digital twin. We also created a utility token that can be used to gain more access to the brand. Right now, we’re one of just a few web3 brands in France.”

Julien Miachon is the founder of Heroes Model Management, the 7-year-old agency that prioritizes individuality in its talent. This fashion month, the company debuted new faces Maca Cabrera, Ava Christian and Rachel Goff, who walked in Fendi, Proenza Schouler and Coach, respectively. Earlier this week, Miachon opened up about how spring’s fashion weeks stacked up, when it came to diverse castings.

What fashion week most embraced diversity this season, from your point of view?

“New York Fashion Week embraced diversity of every kind; we saw size, gender and age inclusivity across so many of the shows. Plus, we saw a lot of [brands] such as Batsheva, Colina Strada, Gabriela Hearst and Tommy Hilfiger cast activists, friends, influencers and sports stars, which added texture to their overall show story.”

Overall, what did your bookings this season say about the state of diversity in fashion?

“This was our biggest season to date. We booked 114 models for NYFW alone, compared to 41 [total] last season. We’re very proud of the talent we work with — most of them have interests and jobs outside of modeling, and we’ve noticed this is [something] that resonates with brands. Also, a more genderless approach to casting and dressing isn’t new, but it’s been growing every season, and we love to see it.”

What was unique about the bookings in Paris?

“There was nothing of note in Paris, [unlike] New York. We also saw some magic in the Milan shows; Gucci had one of the more emotional castings I’ve seen in a while.”