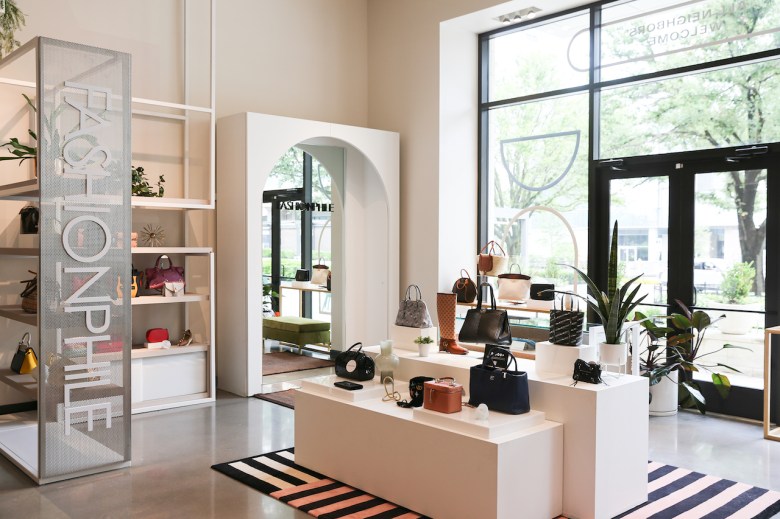 But resale platforms like Fashionphile and ThredUp are experimenting more with physical channels, and as resale makes the jump to back to IRL, traditional retailers are finding more ways to incorporate the model inside their own walls.

Fashionphile, a 14-year-old luxury handbag resale platform, is the latest to make the jump. At the end of July, the company soft-launched a storefront inside retail concept Neighborhood Goods’ Chelsea store. Customers could shop a small selection of about 150 handbags in person.

Fashionphile has eight freestanding stores around the country, as well as a physical presence in five Neiman Marcus locations. A sixth opened in Scottsdale, Arizona on Thursday. But those locations are all “Selling Stations,” focused on buying products from sellers, versus selling to end consumers. Customers can drop off pre-owned handbags and receive cash or credit on the spot. The Neighborhood Goods partnership is the company’s first attempt to sell its bags in-person. Founder Sarah Davis was hesitant to go there.

“We have 45,000 items in stock, and they’re all on the website. So if we put 100 [bags] in a store, chances are that we won’t have exactly what you’re looking for,” she said. “What convinced me to try it was that we have over a decade of data showing what people in different regions are buying. We know what’s selling in Chelsea, and how it differs from what’s selling in Austin or Plano.”

She also saw how online traffic was affected by the company’s other physical locations. When Fashionphile opened a physical drop-off store in San Diego in 2017, it quickly became the company’s best-performing city online, even though New York is where it traditionally had more customers. When Fashionphile opened a location in New York in 2018, online sales in New York rose to match.

One of the biggest challenges with doing resale in-store is merchandising. Every SKU is unique, so needs its own space; stacking doesn’t make sense. What’s more, resellers often have a much larger stock online than in-store.

Fashionphile’s strategy at Neighborhood Goods is to encourage impulse buys — as, if someone knows exactly what they’re looking for, they’re more likely to search for it online. It’s meant for people who may not be familiar with Fashionphile to come in, stumble on a bag and buy it on a whim. Bags are carefully stocked, based on what styles Fashionphile has recently sold online to buyers in the area, Davis said,

Madewell’s Liz Hershfield, svp and head of sustainability, said that the Madewell Forever resale shops in six Madewell stores, launched in July, were merchandised in a similar way.

“Our merchandising team very precisely chooses what jeans end up in the store,” Hershfield said, saying that that’s based on regional sales data.

Fashionphile has grown in the last year, Davis said. Sales of items over $10,000 have been up more than 960% year-over-year in the first half of 2021. Neiman Marcus acquired a minority stake of the company in 2019.

Both Davis and Neighborhood Goods CEO Matt Alexander consider the partnership a test for further collaboration between retail and resale in the future.

“From our earliest days, we have been thinking about how to continuously offer our customers something fresh, and working with a re-commerce brand adds to that excitement of discovery,” Alexander said. “With Fashionphile, we’re bringing our same curatorial philosophy to a new category, and we’re looking forward to seeing how it develops over time.”

Other resellers are increasingly moving offline. The RealReal opened a store in Brooklyn in January, and is planning to open at least eight more this year, building on its 12 current stores. Rebag has opened seven stores in the last five years and is opening another later this month. In 2019, American Eagle experimented with the idea, opening a sneaker resale pop-up shop in its SoHo store, but it was short-lived.

Davis said resellers are in a similar spot that digitally native brands were a few years ago, looking to physical spaces to find new customers.

“It’s so expensive to acquire customers online, because there are so many people competing for the same keywords and internet searches,” Davis said. “Fifteen years ago, stores were only successful based on how much you were selling per square foot, but now a store has a lot of uses. It’s cheaper for us to process a return at a store, and it has a halo effect on online sales in the area. So we’ll be looking at several different metrics to consider whether this a success.”