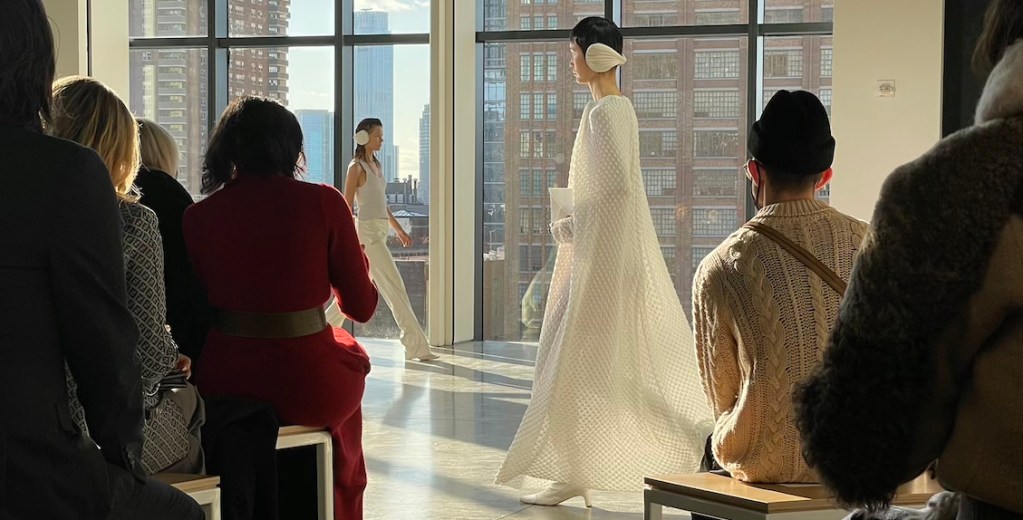 After a weekend of mercurial weather, New York Fashion Week attendees confronted a decidedly brisk Monday, which reminded attendees of the hazards of in-person NYFW shows.

Presently, the phrase on everybody’s lips is not “get back to normal,” or even “post-Covid,” but instead “the new normal.” Government officials in Britain, France, Spain and other countries across Europe are suggesting a new approach to the coronavirus pandemic, which is to accept that it is endemic and a part of the everyday fabric of modern living. In some respects, the fashion industry understands this tonal shift, as designs and customer responses have leaned into getting back to the office, events or other social habits.

For example, at the Carolina Herrera runway show held at an event space near Manhattan’s Madison Square Park, there was no shortage of jewel-toned satin dresses featured long, lush trains, which underscored the brand’s understated sumptuousness. With travel restrictions easing up, Carolina Herrera designer Wes Gordon said he was inspired by his global clientele this season.

At Veronica Beard, which held appointments at its Union Square office, the vibe was distinctly about everyday sexiness. Standout pieces included a dusty rose corduroy pantsuit, a three-piece tweed suit, a white cable-knit dickie and an evening black silk two-piece suit, which had rhinestone embellishment on the jacket collar and tuxedo-pants trim. The brand also featured clog heels and its version of a cowboy boot heel. Veronica Beard has designed shoes for the last several years, and Veronica Miele Beard said that heels have sold better than flat shoes since last season. Miele Beard pointed to the brand’s heeled clogs and heeled boots as more casual options, compared to the stilettos that were common in the pre-Covid era.

In fall 2021, Veronica Beard began a campaign called “Make It Happen,” which spotlighted 40 women from a range of industries who exemplify the concept and act as changemakers. Veronica Swanson Beard said that the fall/winter 2022 collection continues this idea by offering women staple pieces that they can wear in a range of settings and be worn in multiple ways.

“It’s the ethos of our customer. Through Covid-19, we felt very, very strongly that she would come back and that she would want her life back the way it was, and it only a matter of time,” said Swanson Beard. “You want to get up and do the things you love and make it happen. That trickles down to the way we design and merchandise, and to our Veronica Beard gives-back campaigns and our in-store events.”

Markarian also had a spotlight moment for shoes, as the brand introduced shoes as part of its fall/winter 2022 collection during its second-ever New York Fashion Week showcase on Monday. Held at the Prince George Ballroom, the collection included beaded tassel shorts, a red bead-embellished tulle dress, and plenty of ruffles and lace. Alexandra O’Neill, founder and designer of Markarian, said the collection was inspired by her native Colorado and the starry nights. She said she hopes to work her way up to more lifestyle verticals in the future.

“I’m always trying to take into consideration what our girl wants to wear and where she’s wearing it. I’m never going to design great basics, but I also don’t want her to feel like the clothes are wearing them,” said O’Neill.

Other notable shows on Monday included Helmut Lang, Cinq a Sept, Coah and later in the evening Tory Burch and Dion Lee.

Bevza often focuses on sustainability. What are the notable elements of this collection?

“We continued from spring/summer with our ocean theme, but [used] different visual references. We have envelope clutches that look like love letters and are a love letter to the whole planet. With our reference to fish scale [motifs] and sustainable materials, we’re talking about the purity of the oceans. These fish scales are a zero-waste production. We took fabric waste and cut them into fish scales. Also, the buttons are made of recycled plastic caps from [soda].”

What relationship do you have with your Ukrainian roots as a fashion designer?

“It is always my main theme. There is hidden symbolism, such as with spikelets on the [fall/winter 2022] cape. There is a visual language, which I speak to people from abroad. When we did the balaclavas, which were inspired by Olga of Kyiv, people started to Google her. [Design] is the perfect language to talk to people visually.”

What is your position on the geopolitical situation with Ukraine and Russia?

“We keep strong and we will resist. I still have friends there, and we have the strong national position to resist all that. Personally, think it is more about provocation and misinformation attacks from Russia. I think fashion does and should have a role in politics. [Fashion] is also a language to communicate.”

The Markarian show had a notable display of attendees including Nicky Hilton Rothschild and TikToker Charles Gross.