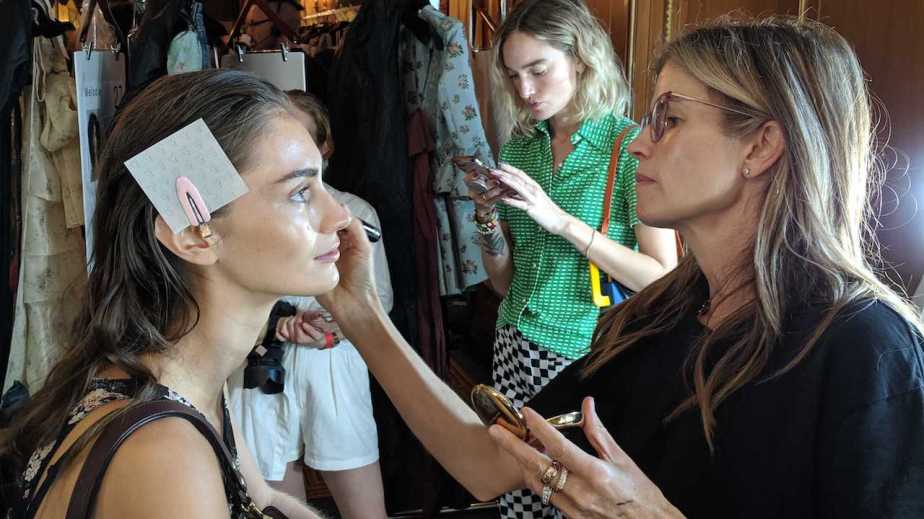 NYFW Briefing: The end, but not goodbye

After a long week, New York Fashion Week is coming to a close. As one crew member said to another, as she scrambled around in the crowded backstage area of Spring Studios this morning, “There is a light at the end of the tunnel.”

The times they are a-changin’
NYFW is a fascinating microcosm of everything happening in the industry, from the rise of size inclusive sizing to the changes that new technology is having on fashion production. And NYFW’s concentration of diverse fashion brands and business models makes it an ideal lens through which to look at one of fashion’s more debated tactics: see-now, buy-now.

The model read like the future a few years ago, but when Tom Ford, Thakoon and others dropped it after only a few seasons trying it, the model’s promise was called into question.

“It’s interesting, the whole promotion of buy-now, wear-now or see-now, buy-now,” said Dennis Basso, backstage before his show at Spring Studios this morning. “We’ve always had that. People would come to the show, look at the collection, and say, ‘I want to wear this now,’ and we’d always accommodate them — as did Carolina Herrera, as did Valentino, as did Oscar de la Renta. They always had a lot of clients they would make those clothes available to right away. I’ve tried to pattern what I do after those great designers. For our private clients, we are always ready to create the collection for them immediately. I’d say 50% of the people here are private clients.”

Is NYFW still relevant?
Every season, you’ll find people bemoaning either the long-ago death of NYFW or its imminent demise. This season had its own ominous signs. The controversy over Kara Ross’s inclusion on the CFDA board and the subsequent exodus of brands like Rag & Bone and Prabal Gurung from showing at Hudson Yards was the most significant. Yet every year, brands show up, the shows are covered breathlessly and everyone agrees to come back next season.

“It’s hard to say it’s not relevant,” said veteran makeup artist Gucci Westman, while perfecting a model’s blush backstage at the Brock Collection show at the Pierre Hotel. “Of course it’s relevant. How else would we know what we are going to look like or what we want to look like? You’ don’t have to be a fashion victim to feel that way.”

“Designers are being pushed to rethink how they deliver connections with their customers,” she said. “Is it a traditional show or something more experimental and experiential? There are so many questions and it’s a really interesting time, and there’s a lot of opportunity on this ever-evolving, super fast-changing world. It’s always fascinating to see how people make it feel fresh and relevant and all those things each season. There’s an energy that I would hugely miss if it wasn’t around.”

So while some may think that NYFW is increasingly losing its purpose, particularly as Instagram becomes the go-to platform for disseminating the looks that will define seasons to come, for many designers, NYFW is too much a part of the culture of fashion to ever truly go away.

“This is my 36th year here,” Basso said. “I think it’s become bigger, more commercial in a sense. It’s more competitive in a different way, but it’s still fun for me 36 years later. I wouldn’t miss it.”

What was your favorite show this week?
I went to Vera Wang’s yesterday. We’re friends, so I wouldn’t not go. It was absolutely amazing. She’s a designer who is exactly who she wants to be. The best part about fashion is everyone is an individual. The true designers create their own look and are true to themselves.

How would you compare your show to hers?
She’s all black and gray and brown and taupe. I’m all peach and blue and prints and patterns. Totally different, but there’s room for everyone in every closet, you know?

Your brand recently celebrated 35 years in business. What’s different about fashion week now, compared to the first time you participated?
Social media has added another level of insanity to the whole thing. Years ago, the celebrities that came were friends that you dressed. Today with big celebrities, unless it’s your closest girlfriend, there’s a list of price points — and you have to pay them to come to your show. It’s different when Joan Collins is in town, because she’s a friend of mine and she comes because she’s a friend. Same with Martha Stewart and Patti LaBelle.

“I could never pull off those pants. Only he can.” –attendee backstage at Spring Studios, admiring Dennis Basso’s stunning pants

Bookmarked
Why the biggest street style photographer in the world (mostly) gave it all up to design clothes
The best of New York Fashion Week, in pictures
What a runway show really costs

Starred
That about wraps it up for this season’s fashion week. There are a few more shows tonight and tomorrow, from international brands like Taoray Taoray and Gaucho Buenos Aires, and NYFW will officially end with Marc Jacobs tonight at 6 p.m.