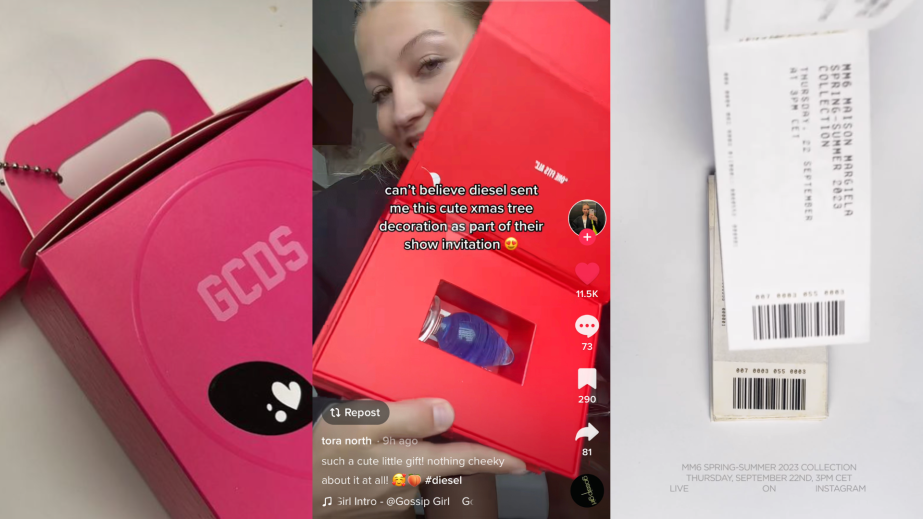 Over the years, fashion show invites have become a specific type of collectible for insiders. They’ve come in the form of condoms, sent by Vetements for its spring 2020 show; pajamas, from Prada for its fall 2022 menswear show; and custom packets of pasta, from Fendi for spring 2020. While digital POAPs have become popular over the last few seasons, these physical objects, which often serve as teasers of shows’ themes, have remained covetable.

Emma Davidson, fashion features director at Dazed,  said that invites need to stand out to make an impression with guests or on social media. “In the digital age, when there’s such a focus on sustainability, unless you’re sending something beautiful, meaningful or useful, probably save yourself some time and money and don’t bother,” she said. “My most memorable and favorite invites ever have been one or the other. [They’ve included] a pair of Prada pajamas, a star named after me courtesy of Gucci and, most recently, a blue glass butt plug, care of Glenn Martens for Diesel.”

The Diesel butt plug masquerading as a Christmas ornament saw 93.000 views on TikTok via a video by Tara North, head of TikTok for Highsnobiety. Invites can create social media moments for a brand without investment in video advertising, though with growing show audiences, they no doubt require a large investment themselves. “If invites are beautiful, people are going to post them on social media, potentially leading to an authentic viral moment,” said Davidson. “Essentially, in many instances, it’s valuable advertising they don’t have to pay for.”

Meanwhile, business consultant and designer Ester Mejibovski and artistic director Bior Elliott worked with the MM6 Maison Margiela team to co-design the film-stub show invites and videos for the brand’s MFW spring 2023 show. “It’s important to have a fun concept behind [an invite], instead of focusing purely on aesthetics,” said Mejibovski. “It was an important part of the brief to make the invite part of the show’s storyline. The show was at an auditorium, so making the invite a ticket was an easy choice. The emailed save-the-date is the introduction, only teasing a part of the information before the actual invite went out,” she said.

The MM6 Maison Margiela save-the-dates also incorporated video — of the physical ticket invites — making them more appealing for social media. “MM6 walks the line between being elegant and being subversive, so we tried to reflect that when designing the invite,” said Elliott. “The [videos] illustrated a story of what happens when you buy a ticket to a show.”

With collectibles becoming a bigger part of fashion and its relationship with its customers, invites also have significant resale value. In 2020, the condoms used by Vetements for invitations were priced at $130 on Grailed, showing their branding value. In 2020, a physical invitation to Alexander McQueen’s fall 1995 show was auctioned and sold for $4,875.