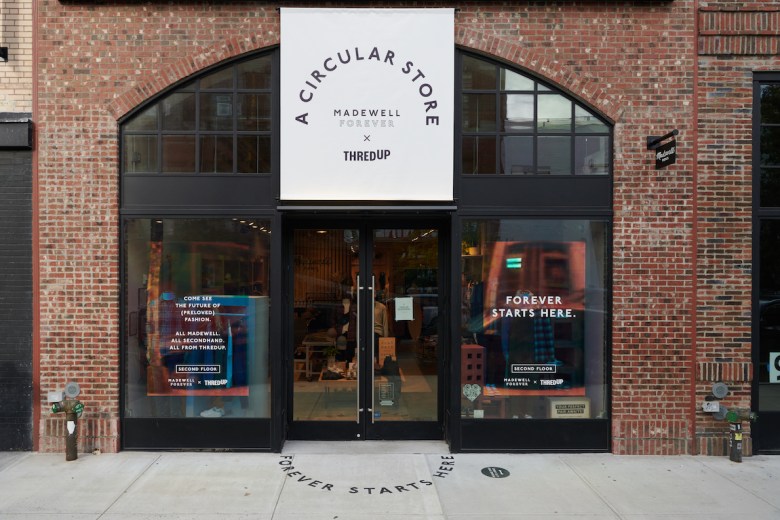 Madewell expands resale experiment to include a physical store

Through its partnership with ThredUp, Madewell has been dabbling with resale and secondhand goods for the last three months, making it one of the growing number of brands taking an interest in having more control over how its products are resold.

Mostly, these efforts have been modest, like adding a shelf of secondhand goods to six stores and selling resale online. But with its temporary store focused on facilitating circularity, which opened in Brooklyn on Thursday, the brand is looking to test more ways to integrate resale into its business.

The store, which will be open until Oct. 31, sells pre-owned Madewell products for $10-$40. It differs from Madewell’s past resale efforts in a few key ways: For one, it’s 100% stocked with pre-owned goods, unlike the small resale sections that exist in six of its stores. The product is sourced from ThredUp’s inventory. The store also includes ThredUp kits, allowing customers to send their unwanted clothes off to ThredUp for cash or Madewell store credit. Secondly, according to Liz Hershfield, svp and head of sustainability at Madewell, education plays a major role in the new circular store setup.

The store’s walls feature stats on clothing waste and its impact on the environment. There are also QR code stations throughout the store that link to online guides about the environmental impacts of resale

“There’s so much that a customer wants to know before they make a purchase, especially if they’re buying pre-owned,” Hershfield said. “Where did it come from? What quality is it in? How do you take care of it so it can be resold again? That’s why education was an important part of this for us.”

Along the same lines, the store featured both Madewell and ThredUp branding. Although Madewell is behind the design and setup of the store, ThredUp provided the product. Hershfield said this was intentional, as ThredUp is the one with all the expertise in resale. Online and offline, Madewell pays an undisclosed amount to ThredUp for use of its “resale-as-a-service” offering, while ThredUp handles the logistics of collecting, processing and cataloguing the merchandise.

“They give us a lot of credibility in the space,” she said.

The last new piece in the store is an alterations and mending station, something that no Madewell store currently has. Hershfield said it’s undecided if something similar would make its way to permanent Madewell stores; the whole point of the circular store is to figure out what features work and can migrate over to the rest of the business.

“We’re still learning a lot,” Hershfield said. “That was the point of launching this. The pop-up is really the first thing like this we’ve done. My perspective is to just say yes to everything. Yes to alterations, yes to education. We want to try every variation of resale we can to learn what works.”

ThredUp has been going on a tear with partnerships recently, working with Madewell, Vera Bradley, Fabletics and Farfetch, all in the last four months. Their resale-as-a-service platform can create white label resale experiences tailored to each individual brand.

Resale is a complicated beast for a brand to set up on its own, and ThredUp benefits from the growing popularity of brand-specific resale because it can power those services. The resale company grew its revenue to $186 million last year, and it’s looking for ways to stay competitive with other fast-growing resale companies like Poshmark.

“At ThredUP, we envision a future where all retailers embrace thrift and we collectively reuse more than we produce new,” said Erin Wallace, vp of integrated marketing at ThredUp. “Choosing used over new fights overproduction and keeps clothes in use and out of landfills. In partnership with retailers, we aim to create positive change within the industry and create a more circular future for fashion.”