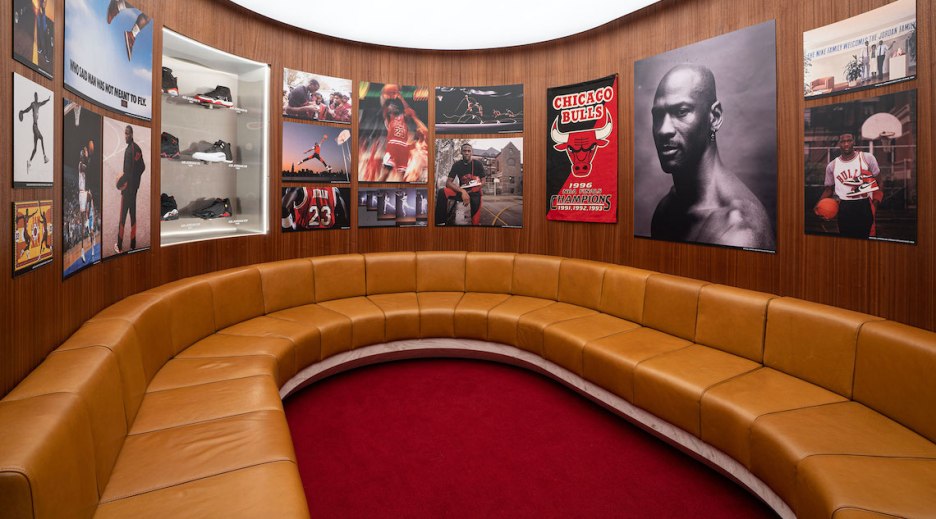 Jordan Brand, the subsidiary of Nike started in the 1980s with basketball legend Michael Jordan, has had immense cachet among sneakerheads and streetwear aficionados for decades. But on December 16, Nike opened the first Jordan flagship, in Milan, under a new retail concept called World of Flight. It’s an attempt to capture a broader luxury audience.

The nearly 4,000-square-foot store has a different vibe than the stores of wholesale retailers like Foot Locker and Finish Line, which are typically sports- or sneaker-focused. It reflects European luxury, with its leather couches and non-crowded floor plan, plus it spotlights the brand’s more expensive products. There are lounge areas, and the walls are adorned with art and photography from local Milanese artists. Located on Milan’s popular shopping street Via Torino, the store is surrounded by stores including Gucci, Sephora, and a number of fashion and luxury boutiques. Calvin Cheung, vp of global marketplace at Nike and Jordan, said the Milan location was chosen specifically for its high-fashion pedigree.

“Milan is the global fashion capital of the world,” Cheung said. “And Jordan has a connection to Italy. The famous shattered backboard moment happened in Italy in 1985. Since we’re trying to push the edges of streetwear and sneakers, Milan felt appropriate.”

Jordan’s next World of Flight store is planned to open next year in Tokyo, itself also a hub of high fashion. The store also has integration with Nike’s SNKRS app where coveted limited-edition sneakers from both Nike and Jordan are dropped regularly. In the store are screens with the SNKRS interface, allowing customers to sign up, purchase sneakers or pick up ones they’ve already purchased from the app.

Along with the SNKRS integration, a focus on customization is a way that Jordan is trying to make World of Flight feel more like a luxury store, though one with more accessible price points than its Milanese neighbors. Customers can get a pair of AJ1 sneakers customized — a service that’s also available at other Jordan and Nike stores — or they can customize a Jordan Renegade jacket, an offering available exclusively at the World of Flight location. The store also stocks exclusive products. Jordan associates are pushing Nike’s loyalty program in-store; the number of new membership signups through World of Flight is one measure of its success.

Nike as a whole is popular around the world, and Europe is one of its biggest markets. A Jordan representative said it’s been the fastest-growing region for Jordan this year.

Jordan’s exclusivity has helped make its products as coveted as luxury items, said Kim Nguyen, global head of distributed commerce at marketing agency Huge. The Jordan brand alone made over $5 billion last year, putting it ahead of competitors like now-defunct Yeezy, which made less than $2 billion last year, and New Balance, which made around $4 billion. Five of the top six most expensive sneakers ever sold at auction were Jordans.

“What qualifies as a luxury item has shifted to a wider range of items, further driving our interest in what’s not only expensive but also hard to come by,” Nguyen said.

Despite the brand’s specific ties to basketball, which is popular mostly in America with exceptions in European countries like Italy, Spain and Greece, Jordan has been able to cross over into other sports. For the last two years, Jordan has been the official kit sponsor for the popular French soccer team Paris Saint-Germain. Two of PSG’s star players, Kylian Mbappe and Neymar, are avowed sneakerheads known for their love of Jordan sneakers.

Cheung said Jordan will continue to focus on basketball first, while exploring opportunities in other sports and luxury.

“Do we have the ability to spread out? We believe so,” Cheung said. “Will we? Maybe. We have a lot of runway to continue to push the edges of streetwear and sneakers, and find the intersection between those worlds and fashion.”