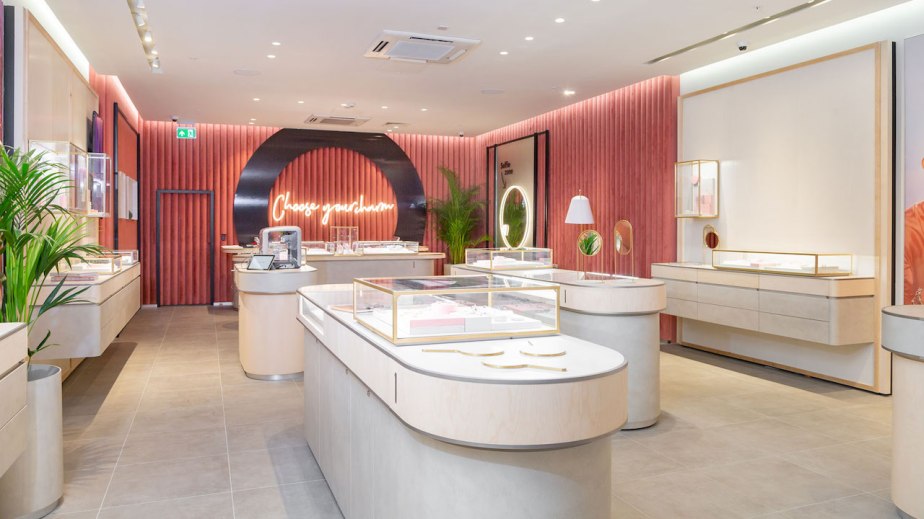 After two tough years, Pandora Jewelry is refocusing its in-store experience to move beyond back-to-back years of declining sales in the U.S.

In 2017, the company lost 27% of its market value, followed by an additional 61% in 2018. Sales dropped 12% year-over in the first quarter of 2019. As part of a larger comeback plan, Pandora is opening its first experience-focused concept store in the U.S. on Thursday, at Garden State Plaza in Paramus, New Jersey. The U.S. store follows the direction of Pandora stores opened earlier this year in the U.K. and China, and more U.S. stores are set to adopt the store model.

Inside the stores, Pandora is focusing on encouraging customer discovery, rather than overwhelming them with sales associates at every counter — something the brand relied on in the past. One key area for discovery is a new charm bar, where customers can learn about the stories behind specific charms, from those in a new Disney collection to those in its zodiac line. The stores will also have a dedicated section of what’s trending and popular, based on data collected from the e-commerce site, and an engraving station.

Other jewelry companies, like Kendra Scott, have taken similar approaches to the in-store experience to drive sales. Kendra Scott holds over 10,000 annual events in its 80-plus stores, which also house the customizable “Color Bar” where shoppers can design their own pieces.

Pandora plans to use Black Friday and the holiday season to test the store’s success in the U.S., but already has plans to open “a handful” of these stores in existing U.S. locations across the country in 2020, said Charisse Hughes, CMO of Pandora Americas. From there, into 2021, the brand plans to accelerate those openings, but declined to share specifics on location and quantity. The company has over 2,700 stores worldwide, with over 380 in the U.S., which is the company’s largest market.

“We hit a really rough patch in 2017 and 2018. We started to see a decline, and what we realized is that we had not paid enough attention to our core consumer. We had not delivered as much innovation to the consumer,” said Hughes.

For many retailers, launching in-store experiences has been a key strategy to drive more customers to physical retail. Nordstrom’s first New York City store, for example, offers in-store shoppers 110 beauty services, like LED facial treatments, lash treatments and blowouts. For Pandora, engravings will be a key way to get shoppers to the store.

“The customization aspect of their business model is the greatest strength. It allows consumers to create something unique and personal, which has become an important driver in the jewelry business,” said Beth Goldstein, accessories and footwear business analyst at The NPD Group.

Charms will be another big focus, as they’re a big revenue driver for the company. In 2018 and 2017, the charms category made up a bulk of Pandora’s revenue, outselling other categories including necklaces, bracelets, rings and earrings. In 2018, charms brought in roughly $1.8 million in revenue for the company.

While this is Pandora’s first “Expressions” concept store in the U.S., the company opened a pop-up to test the concept in the Turnstyle Underground Market at Columbus Circle in New York City on Oct. 2. Pandora launched engraving there for the U.S. market, as well as its new charm bar, in an effort to learn how consumers will navigate the new stores and how interested they are in engraving.

“That gave us a cue that engraving will be a huge hit for us, especially going into the holiday time period,” said Hughes.

Going forward, as Pandora looks to open more of these stores, Goldstein said the company will need to pay close attention to whether or not customers are actually finding value in these experiences.

“Pandora will need to be constantly monitoring how consumers are interacting in their store and then evolving accordingly. If the experience doesn’t align with the brand, or if it is not executed well, or if sales associates aren’t properly trained, or the checkout process isn’t smooth, the other updates won’t matter,” Goldstein said.