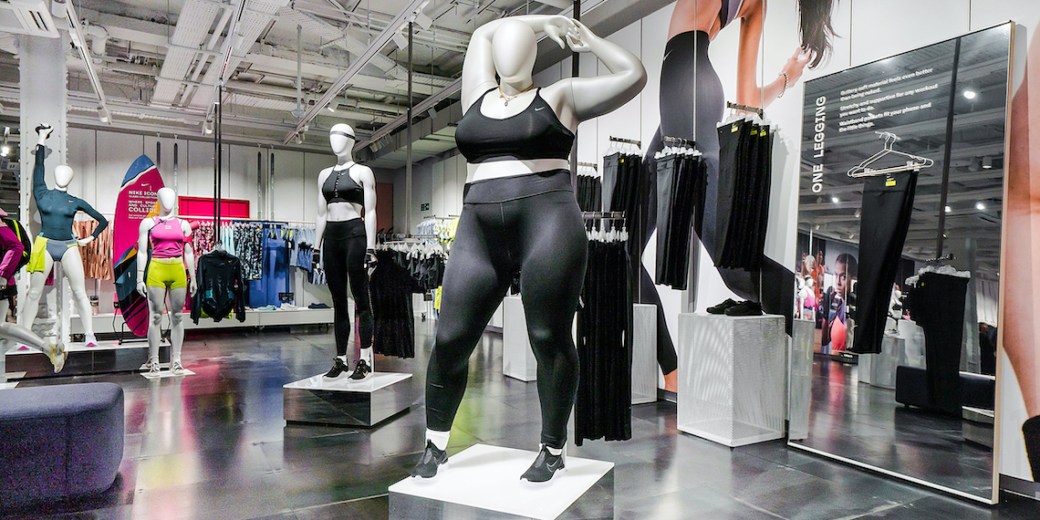 Inside the rise of inclusive mannequins

Most people know the standard mannequin you see in an average American apparel store. They’re white, tall and impossibly thin with elongated necks and spindly limbs — they look, essentially, like traditional supermodels.

But just as models on the runway are changing to better reflect diverse consumers, the same is happening with mannequins. Savage x Fenty’s retail stores, the latest of which opened at the beginning of May, are filled with proprietary mannequins made to reflect a vast array of body types. Diverse mannequins can also be found at Target, Nike, Old Navy and Nordstrom, as retail brands attempt to present a more size-inclusive store experience.

“Our proprietary mannequins came to be because we saw the standard mannequins, and we weren’t satisfied,” she said.

Savage x Fenty based the mannequins on the bodies of the diverse models the design team used to fit its clothes. Guzman said the custom mannequins allow Savage x Fenty to inject more personality into the store experience.

“In addition to getting the body sizes right, we also wanted to get the right poses,” Guzman said. “It was an opportunity for us to create an exhibit-like experience. As you walk through the store, you feel the messaging of what we’re all about.”

This new focus on mannequins reflects the philosophy that no part of a retail experience should be exclusionary. This was the thrust behind Old Navy’s 2021 Bodequality project. Alison Partridge Stickney, global vp of women’s and maternity at Old Navy, said part of being inclusive is rethinking every part of the shopping experience.

“Wherever our customer shows up, she will see herself,” Partridge Stickney said. “When she shops online, she’ll see that every product was shot on three different models, a size 4, 10 and 18. And when she goes into the store, she will see that same diversity reflected in the mannequins.”

Greneker, which makes mannequins for around 50 retailers including Under Armour, Disney and Torrid, has been making plus-size mannequins since 2004 after working with Lane Bryant. Naranjo said Greneker has seen requests from more retailers in the last three years.

“Initially, a lot of inclusive mannequins were focused on women’s fashion,” Naranjo said. “Now, we’re seeing more interest for the men’s big and tall category, for plus-size kids and more inclusive skin tones on the mannequins. Disney has actually been asking for mannequins with ‘dad bods’ and for kids’ [mannequins], because that’s who’s coming into their stores.”

Accommodating diverse skin tones is easier to accomplish than size, Naranjo said, since it requires using different paint rather than a new body shape. But it also has its nuances. Naranjo said brands need to showcase a complete skin tone range, lest they be seen as leaving some people out. A less laborious fix some brands have taken is to opt for a neutral tone like gray that doesn’t correspond to a real-life ethnicity. Some brands, like Under Armour, request specific shades of gray to match colors in their stores.

For its part, Disney has opted for a full range of mannequins with facial features and skin tones to reflect Black, Latinx and Asian consumers, Naranjo said.

While the cost of completely custom mannequins may be high, the increased availability of ready-made mannequins from manufacturers like Greneker means even indie brands can afford to be more inclusive.

Alex Waldman, co-founder of Universal Standard, said that brands shouldn’t look at the money put into new mannequins as an extra cost or a burden, but rather as the baseline for reflecting who their audience is. Universal Standard has often been seen as a leader in the movement toward more inclusive fashion. Its showrooms feature mannequins from sizes from 00 to 40. Each mannequin cost the brand approximately $300.

“All people, whether a size two or 32, deserve to shop in the same way, so we approach every financial decision with size-inclusivity and quality at the forefront,” Waldman said. “When it came to designing our SoHo [NY] showroom, there was no question about what our mannequins would look like — they would resemble the women who shop at Universal Standard, the average women in the United States.”