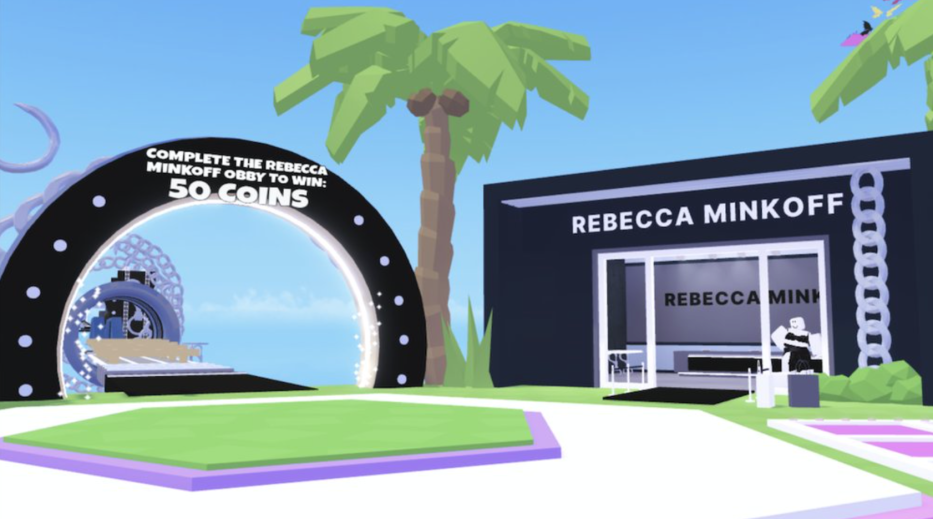 By establishing a presence within an “obby,” or an obstacle course in Roblox, brands like Rebecca Minkoff have been able to tap into games that receive millions of visits on the platform.

For the Rebecca Minkoff High Heel Obby, launched at the beginning of April and created by the creator group Pink Butterfly Studio, users move across a multi-colored board in high heels that get taller every twenty levels. High Heel Obby, created in Roblox in December last year, has seen almost 40 million visits according to Roblox. Users could enter a virtual Rebecca Minkoff store as part of the brand’s two-week takeover, and try on virtual handbags and boots.

For Rebecca Minkoff, partnering with creator studios Dubit and Pink Butterfly Studio on an obstacle course allowed for an engaging shopping experience, where users at higher levels were rewarded with access to the Rebecca Minkoff shop. On average, the brand saw 20,000 players a day play the game, with very high engagement, compared to other obbys in Roblox, of eight daily minutes per user. Pink Butterfly Studio shared that players loved particular products from the collection, which were sold as digital fashion. They included the Siena Flame Over The Knee Heeled Boots, which consumers can buy today in physical form.

“We keep going deeper into the metaverse and getting into the gaming arena, because we know that the amount of growth, especially among women, is explosive,” said Minkoff. “We’re always wanting to test how to get the attention of a younger audience, because soon they will have money and, hopefully, they will want to spend it on us.” Working with game developer company Dubit, which is based out of Leeds in the U.K., as well as other Roblox developers, Rebecca Minkoff chose to get in on High Heel Obby as it’s focused on shopping and accessories.

“They felt that, to make our accessories and the virtual store shine in the short amount of time we had, it was the right choice. We chose the items, and offered incentives [to advance in the game] and $5,000 worth of prizes,” she said. “We wanted to choose a game that has a large female audience, because some of these games don’t necessarily have that.”

The brand’s main priority in the metaverse has been to develop a consistent and ever-deepening relationship between its core customer and its digital garments, where customers can take ownership of them and wear them in the future. “While we see our garments going into gaming, we also see them eventually going onto Zooms. We’re looking at how we can increase the utility of all the NFTs we offer, to give her a well-rounded experience. She should be able to wear the heels and play in them and run in them and jump.”

Other brands, like Nike and Forever 21 have also launched obby experiences in Roblox. Nike launched a Pachinko obby within Nikeland in February, and in December last year, Forever21 launched an obby where users can experience running their own store. However, these activations have not come without criticism. The obbys, or obstacle courses, have also been criticized by regular Roblox users for their lack of storylines and repetitive gaming movements, like jumping from block to block.