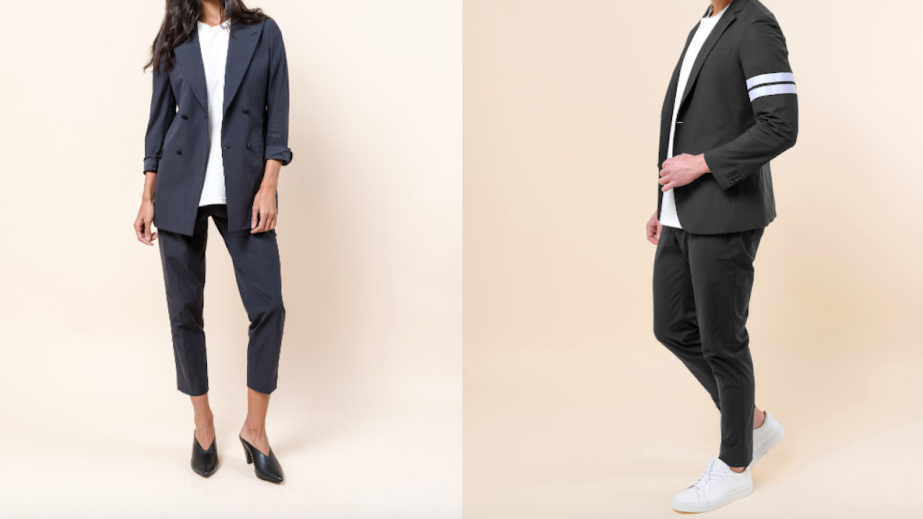 As the lines between casual wear and formal wear continue to blur, categories as disparate as athleisure and suiting are coming together in surprising ways.

The idea of clothes combining the tailoring of suiting with the comfort of athleisure is at the core of a new launch from 2-year-old Los Angeles brand Sene. The company is launching a new line of custom made-to-order suits for both men and women that are made from performance and technical materials in the same mill where Lululemon makes a good amount of its clothes.

“As the workplace changes, business deals are happening over lunch or over drinks instead of in a boardroom,” said Sene CEO Ray Li. “We are finding that our customers want to wear a suit and they want to look good, but they want that suit to be comfortable and hip, and carry them through the day.”

Rather than asking customers to come in for long measurement sessions that can take up to an hour, Sene has come up with an alternative to the traditional suit-fitting process. Customers can order a box full of sample suits to try on in a range of sizes, or if they go to the brand’s L.A. store, they can try them on there. Then, they offer feedback to Sene’s tailors who alter a chosen suit according to the customer’s preference, with a two-week turnaround.

The more relaxed dress codes of businesses across the country were a major inspiration for the new suit, said Li. It’s reflective of Express’ move to rethink how it categorized and sold its office wear versus its casual wear. Li believes that consumers today, particularly those who work in Silicon Valley and tech-adjacent industries, want to straddle the line between formality, comfort and hipness by looking to brands that provide a good mix of both, like PH5, with its knit suiting, or Bonobos.

The global market for suits is remaining steady, with close to $2 billion in revenue expected in 2019, despite the fact only 1 in 10 people wear a suit to work on a regular basis.

But whenever a brand tries to thread the middle between two trends, there is always the risk that instead of cleverly synthesizing the best of both worlds, they will instead fall in a gray area and unable to compete with either. Between suiting and athleisure, there is the possibility that customers who are not used to the waiting game that comes with buying custom clothing may be put off. Custom clothing is also more expensive — Sene’s suits are around $800 — but Li believes customers will quickly see the value.

“Our turnaround is quite fast for suits,” said said. “These materials are a little more affordable for us, so we can make them a lot quicker.”

Part of the inspiration for Sene’s foray into mixing suiting with casual wear is the ongoing adventurousness being seen across men’s fashion. Li cites the increased boldness of men’s fashion choices — like Timothee Chalamet accessorizing his red-carpet look with a leather harness — as a reason he believes the performance suit will be a success.

“We’ve been talking about men’s fashion for half a generation,” said fashion writer Christina Binkley in a recent Glossy interview. “You got a whole bunch of young men that are now starting to buy fashion, and they haven’t been told to be scared of it their whole lives like their fathers were. Men’s fashion is in a really interesting place right now.”

Sene is still a relatively small brand. At less than 3 years old, the brand has five employees and one location in LA, and brings in around $2 million a year. With the launch of the athleisure suit, Li is hoping that Sene can capitalize on the blurring of the lines between casual wear and formal wear.

“A suit will always be a suit, and sweats will always be sweats,” Li said. “But both sides pull from each. On the casual-wear side, brands like Off-White are bringing a lot of tailoring influence in, and suiting is often seen styled with brands like Common Projects. I think there’s a real market for people who are looking for a bit of both.”