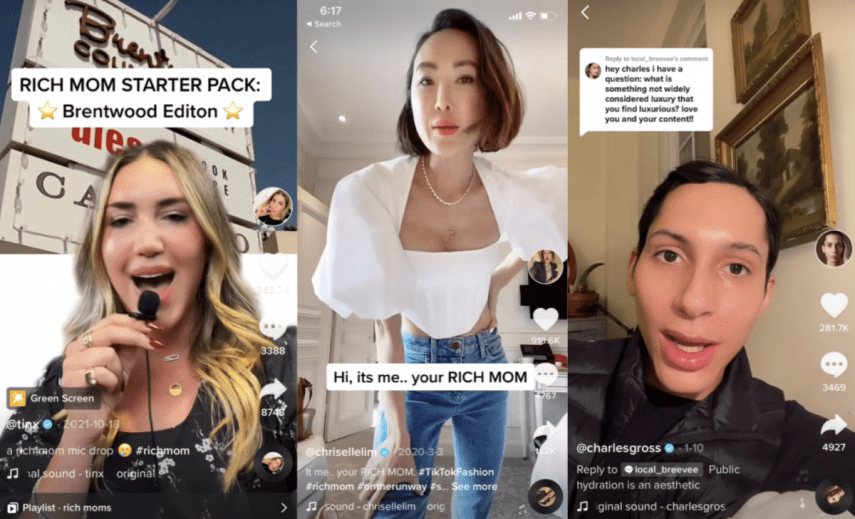 When I was a tween and early teen, circa the early aughts, luxury was clearly defined: Seven jeans, Juicy Couture sweatsuits and maybe a Louis Vuitton Speedy bag, if you were really bougie. Today, while there are, undoubtedly, “status symbols,” they are blurrier — more loosely defined, and attached just as much to one’s lifestyle and health as they are to their material possessions.

On January 10, TikToker Charles Gross (888,000 followers) posted a video response to a comment: “hey charles I have a question: what is something not widely considered luxury that you find luxurious? love you and your content!!!”

In his signature ASMR-esque voice, Gross responded. Here’s a summary: “Individuals that carry around large water bottles and take large sips throughout the day,” and “Individuals who carry their phone without any case.”

Tinx (1.5 million TikTok followers) made a name for herself with her cheeky descriptions of “rich moms.” They’ve become so popular, Gwyneth Paltrow even chimed in for the Brentwood edition. Another Tinx hallmark is the “rich mom walk,” which is … a walk, furthering the notion that wellness and the time for self-care are the truest luxury of all. Chriselle Lim (2.7 million TikTok followers) also has a continued “Rich Mom” bit, though it satirizes the realm of more traditional definitions of luxury. The hashtag #richmom has 112.4 million views on the app.

Meanwhile, on January 12, Popsugar declared: “‘Expensive Brunette’ Is the Hair-Color Trend That’ll Make You Feel Like a Million Bucks.” The description has since caught on in the press and via clients requesting the look from their colorists.

Even the hot trends in hair connect to one’s ability to project an aura of overall health, with “healthy” and “shiny” being the key adjectives used by media and hair professionals to describe “expensive brunette.” I asked Jenna Perry, colorist to “it” girls including Bella Hadid, Emily Ratajkowski and Dua Lipa, what the trend is all about and, from her professional standpoint, what it actually looks like. Compared to basic brown and the more heavily highlighted hair that had been in style, “expensive brunette is richer, warmer — it’s more about complimenting your features,” Perry said. Given the decreased frequency with which people have actually gone to hair salons since the beginning of the pandemic, many people have had to become comfortable with lower-maintenance hair, Perry noted. The new brunette depends less on highlights and more on balayage, which is easier to grow out. “It’s been a blessing in disguise … because less is more.”

She pointed to Hailey Bieber as a perfect example of someone whose hair has moved with the trends and embodies the current look well.

Though Gen Z is more typically affiliated with secondhand shopping than couture, it’s clear that a younger, social media-savvy generation still wants luxury in some form — even if that form is hydration. “Gen Z has gravitated to this kind of content perhaps because it offers a different kind of aspirational framework for how to live your best life,” said Larry Milstein, co-founder of  PRZM, a Gen-Z-focused marketing agency. “There is a ‘quiet luxury’ to the so-called ‘rich mom,’ who is less concerned about documenting their lifestyle on social media or conspicuously posting. That makes these guides particularly interesting since it feels like getting an inside scoop.'”

Being that Gross has become a go-to among his following on the topic of luxury, I reached out to him to discuss the shifting meaning of luxury. “For a long time, there have been these canonized perceptions of what wealth is and what wealth looks like. But TikTok — the audience and creators together — are creating a new perception of wealth that’s outside the traditional golden buttons on a Chanel jacket or a Rolex watch. And it can be a water bottle or the color of your hair, or how you compose yourself,” he said.

There’s also new consideration given to a brand’s values, story and prioritization of sustainability. In fact, while perhaps a luxury purchase was once prompted by seeking status, Gross said that, today, young shoppers look for quality and value when making a larger purchase. No longer is a star-studded campaign enough. “People are turning to luxury brands less so to fit into a group or a club, or display an aspirational facade. They’re more so looking at the story of the brand, the history of the brand, and brands with the most transparent information about their manufacturing and ethics — that hugely influences the decision of buyers nowadays. Now, if buyers choose to buy a luxury piece, they have a reason behind it. And it usually aligns a lot with their core beliefs,” he said.

Today, what’s aspirational is “this person who has their health and wellness and self-care very well-managed and takes time for themself… They have everything together. They have the style, the attitude, the balance,” Gross said. He noted that this person may not, in fact, be “wealthy,” at least when it comes to their finances, and that their level of wealth is, in fact, beside the point.

“As influencers [tell it], they wake up and eat, like, hand stone rolled oats [they] made, they have a perfectly balanced snack, they go to the gym for 15 hours, they center themselves in a gratitude sound bath class, and then they come home and have, like, a one-on-one with Gwyneth Paltrow,” he said. Even if that isn’t all actually happening, it’s still meant to telegraph luxury.

Ultimately, if you want to look at it optimistically, Gross, a role model to his community, has a rather wholesome take on what luxury is. “Luxury is so much more than an item or a price tag. Luxury, or the air of luxury, is free, if you know how to access it. It’s a combination of attitude, how you present yourself, how you treat other people, how you take care of yourself and how that’s presented to the world. There’s no price tag on that luxury.”

Trend of the week: Murder Robes

We’re still on the topic of money today!

Have you ever dreamed of marrying rich, only to end your husband’s life and claim his fortune? If so, TikTok has a robe for you. The hashtag #murderrobe has 5.9 million views, with most of the corresponding videos showing people swanning around in feather-bedecked robes. The robes are often paired with a sound from “The Simpsons,” in which Lisa says, “Just buy it, you don’t have to rationalize everything!” to which Marge replies, “All right, I will buy it! It will be good for the economy!”

If you’re fancy, you’ve splurged on the robe that’s at the center of the buzz. It’s made by burlesque queen-turned-entrepreneur Catherine D’Lish, whose handmade robes hover around the $300-$500 price point. Still, Amazon dupes for murder robes are as common as Amazon dupes for anything else that’s gained traction on TikTok (read: very common). In one TikTok, user @themarchedit, walks down a staircase in a robe as a voiceover says, “If I’m describing a robe to you, and I say, ‘It’s the flowy type of robe that a woman wears after she has murdered her husband,’ do you know what I’m talking about?”

We spoke to lingerie expert Cora Harrington, author of a book on the topic, “In Intimate Detail,” to gain insight on the origin of the trend. Harrington set the record straight that the “murder robe” idea had been a meme on other platforms for years before TikTok existed. She went on to say that, while today, D’Lish’s designs are oft-copied (and even mismarketed on Amazon), similar styles date back to the 1930s and ’40s.

When you think about it, murder robes speak to the exact moment we, as a society, are in right now. We’ve been locked down, then out and about, and, most recently, scrounging for N95 masks. We’ve spent endless hours in sweatsuits, and while plenty of people are not eagerly awaiting a return to “hard pants,” they are yearning to feel put together, and just a little bit more fabulous.

“It’s lavish, it’s dramatic, it’s opulent. Most of our clothing today is not that; it doesn’t have that drama,” Harrington said. These flowing robes also stand in contrast to the tight-fitting silhouettes that are currently on-trend, she said. They also spark imagination.

“You’re floating around, you have the train of your robe floating behind you, you’re, I don’t know, singing a power ballad at a haunted mansion… It’s easy to create stories around this kind of robe! It’s explicitly a fantasy object; by definition, it is impractical! And that’s part of the appeal. It’s not about anything other than glamour,” Harrington said, adding, “And who doesn’t want to be the main character in their own story?”

Goop has partnered with Heretic, the perfumer behind its infamous This Smells Like My Vagina candle, on yet another vaginally-inspired candle. Goop describes the candle as having notes of “coconut milk and Damascena roses … balanced with raw vanilla, clean notes of hinoki cypress and hints of toasted cacao.” Better yet, $25 of each $75 candle sold will be donated to the ACLU Foundation’s Reproductive Freedom Project.

Fashion and beauty brands collaborating has become a common trend, but few iterations have the playful glamour of this $310 pink fluffy case filled with four minis of the luxury skin-care brand’s high-end products. Each is made with ingredients from the brand’s Sicilian farm.

Mario Dedivanovic on creating a makeup mirror for ‘the younger generation’

The Y2K hair stamps trend is back — thanks to Rihanna, Dua Lipa and Megan Thee Stallion