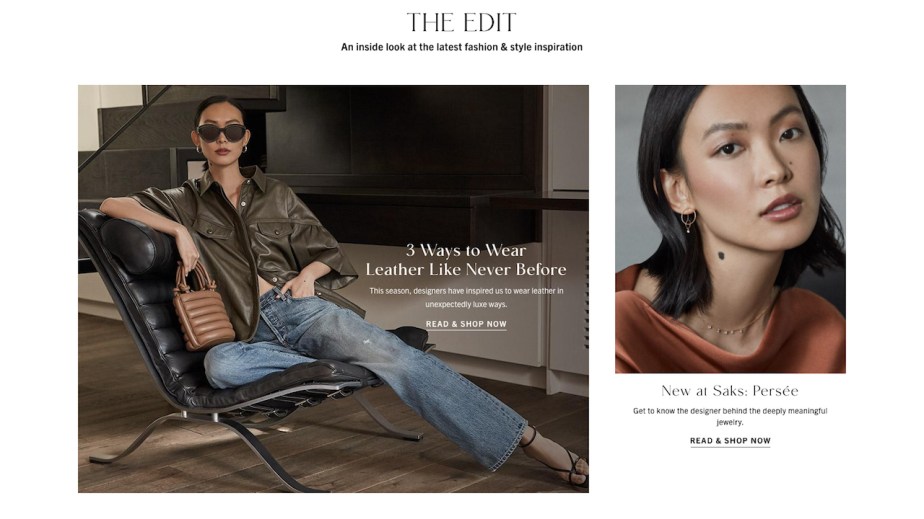 Fashion Briefing: The relaunch of Saks.com spotlights the new standards of luxury e-commerce

With its website relaunch, announced to customers in an email on Tuesday, Saks revealed its strategy for remaining a go-to luxury shopping destination, amid heightened competition from digitally native retailers: It will increasingly cater to men, spotlight new arrivals, provide inspiration and cater to customers’ shopping preferences. According to CMO Emily Essner, the focus is “personalization, ease and fashion.”

The retailer is now going head-to-head with the likes of booming Farfetch. Customers who once browsed one of Saks’ 40 physical stores before making a purchase are now searching on Google instead, since older, traditional luxury consumers became more digitally savvy during the pandemic.

Kristin Maa, Saks’ svp of digital, said the hope is that Saks.com will become the first stop for online shoppers on a mission, but she’s also focused on winning over those who hit up Google instead. “We’re, for sure, leveraging Google; it’s a great top-of-the-funnel marketing channel,” she said, noting that the site refresh included “backend tech updates to make [the site] more responsive to and aligned with search results.” Once shoppers have been on the site, Maa expects Saks’ “curation and perspective on fashion” will keep them coming back.

Among the most noticeable updates is an option to choose “women” or “men” at the top of the homepage for a more personal shopping experience; the homepage, including its menu items, are overhauled when bouncing from one category to the other. “We’re really trying to speak to our men’s customers and make them feel that Saks.com is just as much a place for men’s fashion as for women’s,” said Maa. “That’s based on the astronomical growth in men’s business that we’ve seen, which has been accelerated since March.”

Saks’ percentage of growth in menswear sales is in “the very high double digits” over last year, said Maa, which aligns with the industry; menswear sales are outpacing that of womenswear and are expected to maintain that arc until 2022.

Neiman Marcus and Nordstrom restrict the men’s category to a menu item that sits at the same level as beauty, kids and home, for example. But digitally native luxury fashion retailers seem to offer fully unique men’s and women’s shopping experiences, as a rule. Those hosting them include Farfetch, Net-a-Porter (with Mr. Porter), MatchesFashion, MyTheresa and 24S. And that’s not to mention that luxury fashion houses are increasingly ramping up their menswear focus. Louis Vuitton, for one, opened its first dedicated menswear store in June.

“The digitally native retailers came in so quick and were so effective at gaining market share, that the big traditional guys kind of got their lunch eaten,” said Vic Drabicky, founder and CEO of consultancy January Digital, who has worked with Neiman Marcus. “So now [traditional retailers] are looking to those guys to see if they can figure out what their best practices are and where those can be adopted into their own organization.”

Saks’ owner Hudson’s Bay Company started seeking outside financing earlier this year, though it reportedly dropped that plan in August. Competitor Neiman Marcus filed for bankruptcy in May, and Barneys closed its last doors in February.

Both the men’s and women’s homepages on the new Saks.com house a section called “The Edit,” featuring curated product collections around a theme, along with features like Q&As with designers. The Edit existed prior to the relaunch, but wasn’t on the homepage and didn’t include the magazine-style stories. Many of the included product features are focused on inspiring shoppers to wear styles beyond sweatpants, including “8 Comfy-Chic Ways to Dress Right Now” for women and “How to Get Dressed Up Again” for men. Both Edits also include holiday gift guides.

Another homepage section that highlights new arrivals is set to be updated at least every Tuesday — Essner said it’s meant to drive frequency of visits to the site. Reminiscent of Farfetch’s emails, which state that it adds “500+ pieces of newness” to its site every day, the new arrivals section calls out the number of styles added each week: This week, that’s 1,013 in the women’s category. Other homepage sections include “featured brands,” which spotlights new and popular brands, and “shop by style,” that currently features guides for loungewear and workwear, among others. A bottom section directs to the company’s most timely services, including virtual shopping, in-store shopping appointments and same-day delivery, as well as to its cleanliness and safety guidelines.

“We certainly wanted to get [the launch] in before holiday,” said Essner, during last week’s Glossy Forum. She called out the new site’s improved stability and search functionality as key for the holiday shopping season. Maa said Saks expects to see “a lot of online growth for the holiday,” and will be encouraging customers to shop early to ensure timely delivery of products. The site typically sees 180 million visits per year, according to a Saks spokesperson.

Saks shoppers “heavily use search” to find what they’re looking for on the site, said Maa, so search was updated to take over one’s screen when used. Along with recent searches, popular products by a searched brand are displayed, and brands’ names autocomplete when typed.

Other changes to navigation include allowing shoppers to filter pages of products by “available now” or “pre-order,” as well as available to “pick up in-store” or by “same-day delivery” (for those in NYC). They can also choose whether they want to view products alone or on a model. On individual product pages, additional sizing information has been incorporated, including the measurements of featured models.   In addition, Saks’ “favorites” feature has been updated to be called “wishlist.” When viewing their shopping cart, shoppers are reminded of items on their wishlist, as well as informed which are on sale and which have limited inventory.

“We think about a channel-less experience,” said Essner, when asked about goals around omnichannel. She pointed to virtual shopping appointments that are carried out at the NYC flagship and the digital clienteling services manned by in-store associates.

Post-holiday, Saks.com will offer personalization for shoppers beyond existing product recommendations, which are based on what they’ve browsed and bought, and what similar shoppers have purchased. And early next year, Saks will “have something more to share” regarding the addition of a pay-later option, such as Klarna, said Maa.

“Prior to Covid[-19], every luxury retailer could get away with essentially the exact same website, the same product for the most part — everything was a little bit the same,” said Drabicky. “Now that they have to go back and fight for customers again, you’re finding these little ways they’re incorporating luxury again and putting in the effort to create a special experience.”