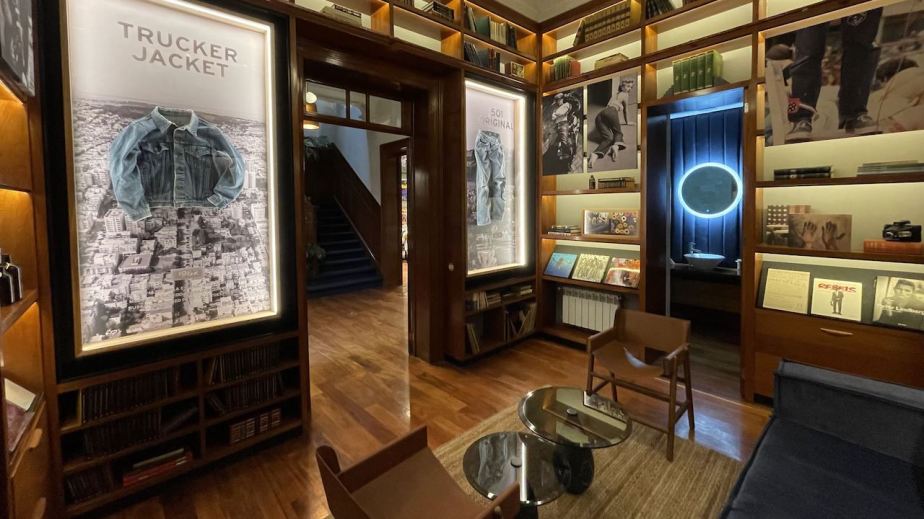 Before the Revolve Social Club and any uttering of “creator house,” there was Levi’s Haus of Strauss.

“Instagram barely existed,” said Karen Riley-Grant, CMO of Levi’s, regarding the opening of the first Haus of Strauss, in early 2012 in Los Angeles. The 169-year-old company now operates five “Hauses,” which are closed off from consumers and operate as a sort of denim-focused playground for influential creatives. Along with L.A., Hauses are based in Tokyo, Johannesburg and London. The newest location launched in Mexico City in March. Another is set to open within the next year.

The spaces’ concept and accessibility are further described by a Haus of Strauss Africa employee at the start of a February 2022 YouTube video by local influencer Thandolwethu Tsekiso (100,000 Instagram followers). Over 28 minutes, Tsekiso documents her Haus experience, from trying on clothes in a souped-up fitting room to working with an on-site tailor to customize her style selections.

“We don’t sell anything, you can’t buy anything, and you can’t buy your way into the space; it’s invitation-only,” the employee says, before noting that invites go to people beyond digital-native influencers. “We work with creators who are fashion-forward, think interestingly, are doing amazing things with their work, work with their communities… We pay attention to what people are doing and invite them accordingly.”

Rapper Kid Cudi already paid a visit to Haus of Strauss Mexico City after learning of the location while on a video shoot in the area, said Riley-Grant. He had stopped by Haus of Strauss L.A. in the weeks prior.

Serving as cultural hubs within cultural hubs, the Hauses fuse music, food and art within the confines of the world’s most influential cities, Riley-Grant said. The intention is to foster relationships with people in the arts and entertainment industries by providing a “safe space” via one-on-one service and exclusive parties. The goal outcome for Levi’s is brand awareness and, in turn, boosted sales.

Riley-Grant said that learnings from the Haus are applied to the company’s store processes and events, as well as its off-site activations. On-site tailors, a concept that started in Hauses, are now signature elements of the brand’s flagship stores. Last weekend, Levi’s returned to Coachella as sponsor of the infamous, celeb-studded Neon Carnival. Paris Hilton hosted.

“This is the hardest working marketing vehicle we have,” Riley-Grant said of the Hauses, calling out the halo effect they have on the business in their corresponding markets and beyond.

Of course, there are other, more efficient ways to drive sales – but Levi’s has learned since the start of the pandemic that prioritizing lower-funnel marketing tactics doesn’t pay off. The company saw double-digit year-over-year revenue declines for four consecutive quarters, starting in the second quarter of 2020.

The Latin American market was an exception: For the first quarter of 2021, Levi’s reported 70% year-over-year sales growth in the region, driven by the introduction of several localized touchpoints. That included newly opened and updated stores in a variety of formats across Mexico, the Andes region and Brazil.

Levi’s latest earnings report, for the first quarter of 2022, showed an overall revenue boost of 22% year over year.

“You’ve got to get the lower funnel tactics in, as well as the upper funnel [tactics],” Riley-Grant said. “After Covid, we took our eye off the big brand-building moments, spending too much time swinging to the other end of the spectrum. And we saw share loss, we saw equity loss – it was a short-sighted move. So now, I’m ensuring we’re taking a balanced approach, and [focusing] on the Haus is part of that.”

While decidedly marketing tools, the Hauses have also worked to inform Levi’s product development. In giving creatives across industries [free rein] to design denim styles, “we learn what trends are emerging, what’s resonating and even how [people are] wearing denim,” Riley-Grant said.

Appointed CMO in February 2021, Riley-Grant has a long history with Levi’s and was part of the team that first brought Haus of Strauss to life. The original concept was “more analog than digital,” she said, admitting that the newer Hauses have, in part, been designed with Instagram in mind.

Orchestrating Haus activations are a global head of entertainment marketing, who’s based in LA., as well as her team members in each market. Agency partners provide support. On occasion, the Hauses host pop-ups that are open to consumers.

Each Haus is unique, with elements including the music, product curation and invited guests meant to reflect the local market. At the same time, innovation is prioritized, but always with Levi’s DNA as the North Star. Despite the localized approach, each Haus is the utmost expression of the Levi’s brand, according to Riley Grant.

For its part, Haus of Strauss Mexico City features six on-site tailors who create one-of-a-kind pieces via added embellishments and customized tailoring. Other exclusive pieces are sold on-site, including in a vintage showroom. The fitting rooms feature adjustable lighting, sound equipment allowing for play of custom playlists and a tripod for an iPhone. Guests can also rely on a professional to capture their look in the included photo studio. In addition, they can spin a record in the music room and grab a seat while sipping a drink.

The Haus, which faced a delayed opening due to pandemic obstacles, is based in a three-story house dating back to the 1880s. A local candle maker created a scent for the space, while the dominant blue shade was chosen for its reflection of both Levi’s and Mexico.

On Wednesday, two days before announcing the departure of CEO Nancy Green, Old Navy revealed a new commitment to freeze its prices on kids’ products through the end of the back-to-school shopping season. According to March 2022 NPD data, Old Navy holds the most market share in the kids’ market. Old Navy does not break out its business by category.

“We’re all seeing, hearing and reading the statistics on rising inflation,” Andres Dorronsoro, vp and general manager of Old Navy, told Glossy of the move. “We understand the pressures this environment puts on families and consider this a critical time to deliver on [our] trusted value equation.”

Dorronsoro would not comment on price increases the company has implemented thus far, only stating, “We’re constantly evaluating our pricing in light of industry headwinds with the goal of remaining a leader in the value space.”

Are rapid delivery services the key to unlocking circularity in fashion?

Starting on Thursday, Thousand Fell, which makes recyclable sneakers, and NYC-based rapid-delivery service Gorillas are offering complimentary pick-up of recyclable textile waste. According to Thousand Fell founders Stuart Ahlum and Chloe Songer, their customer typically wears a pair of sneakers for 8-10 months. Thousand Fell’s recycling partner is SuperCircle. The company offers a $20 credit to customers for each pair of shoes they recycle.

“We’ve worked with the Gorillas team to streamline the process as much as possible,” said Ahlum. He explained that customers have the option to order a bag and drop in items while the Gorillas driver waits, or hand off old shoes to a Gorillas driver as they deliver their next pair. Customers can also drop off shoes at Gorillas NYC locations.

“We’ve found that the majority of people want to recycle their used clothes and sneakers when they have the option – they just don’t know where to go,” said Songer. “The convenience factor, especially in NYC, is the biggest barrier. Our community has been asking for something like this for a while.”

This marks Gorillas’ first pick-up partnership. However, the company has just linked with UPS to allow customers to send back items with its drivers starting on Monday, said Adam Wacenske, head of U.S. operations at Gorillas.

How fashion brand Destree landed Beyoncé and Rihanna as investors

On Wednesday, Paris-based ready-to-wear brand Destree made waves with its Series A funding announcement, which spelled out participation from the who’s who of pop culture. Joining VC firm Sequoia Capital China are Beyoncé, Rihanna, Gisele Bündchen, Jessica Alba, Reese Witherspoon, the list goes on.

The 6-year-old company – which speaks to the “quiet luxury” trend sweeping TikTok – plans to use the financing to hire new talent, up its digital marketing and expand its physical retail footprint in large international cities. Currently, 60% of its sales come through its direct channels.

“It’s important to me to surround myself with empowered, driven women, whose success I can admire. [And] I want to ensure we’re empowering women in every aspect [of the business],” co-founder Géraldine Guyot told Glossy, noting that many of the investors were already brand ambassadors.

She added, “It is very humbling to have so many inspiring women believe in our vision.”

That’s according to a new report by wholesale platform Bulletin on “Navigating Retail’s New Normal.”

“I’ve had to get over my fear of ordering in bulk,” Tola Akinbiyi, owner of the retailer Bon Femmes, said in the report. “At this point, it’s better to have too many than not enough when you need it the most. The upfront costs aren’t fun, but it helps so much in the long run.”

“In 2020 and 2021, many brands could no longer produce inventory, were short on fabrics or materials from overseas, or couldn’t anticipate surging demand for certain products,” Ali Kriegsman, co-founder and COO of Bulletin, told Glossy.

Along with buying in bulk, retailers are safeguarding their operations by moving to the drop-ship model. Doing so allows them to easily expand their assortment to alleviate supply chain “hiccups,” she said.

For its part, Bulletin has become more rigorous in “de-merchandising” brands on its platform.

“If brands are letting orders expire or declining orders repeatedly, we make sure it’s harder for retailers to find those brands,” she said. “We also launched an inventory tracker for the first time last month, so brands can better showcase to retailers what inventory they actually have on-hand and ready to ship ASAP.”

What really happened at the Coachella-adjacent Revolve Festival

Is body-positive shapewear an oxymoron?