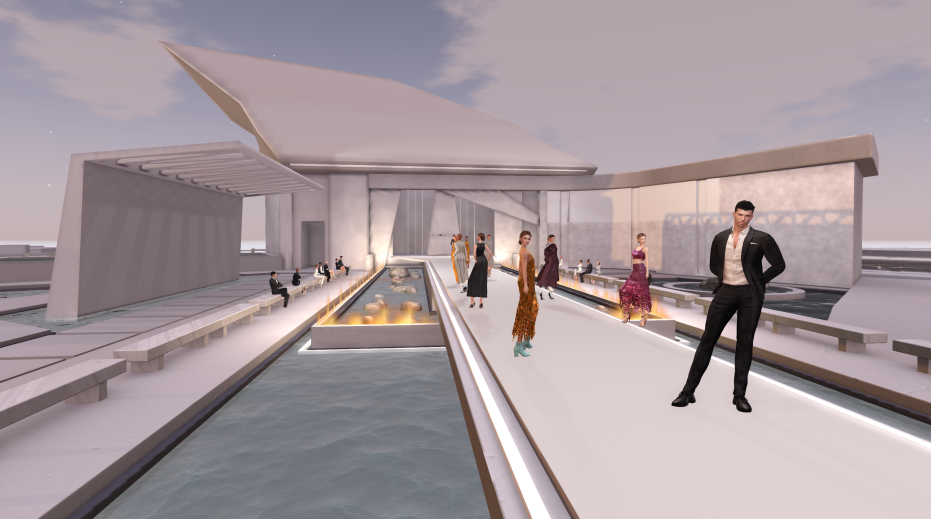 As fashion weeks around the world adopt themes like sustainability and next-generation design, NYFW could become a go-to for technology collaborations. This season, multiple designers experimented with the format.

The traditional ready-to-wear that NYFW is known for has become less of a focus — in fact, insiders are going so far as to say this season’s collections have been boring, with a focus on commercial success rather than a post-pandemic reinvention. However, one element that’s definitely felt more exciting is the integration of technology; American brands are defining the next steps in their creative direction by, for example, presenting shows on virtual world Second Life and giving out free NFT’s to attendees.

On Sunday, guests at the Altuzarra show were given a package that included a book that inspired the designer’s collection this season. It also included a personal note from the designer and inspiration imagery, the latter of which was immortalized in NFT form with the help of the social NFT marketplace Bubblehouse. The NFTs came in different print colorways with varied levels of collectability. In a statement, the designer said, “Working with Bubblehouse for our recent show allowed us to reimagine what the future of Altuzarra touchpoints could look like and, ultimately, allowed us to be creative with a new medium.” The showgoers-turned-NFT holders will be invited into Altuzarra’s exclusive “collector’s club” on the platform, giving them access to future NFT drops, early access to private events and premium access to the brand.

Also released this NYFW, for fashion brand Markarian, Bubblehouse created an NFT in the shape of a bubble-filled jewelry box that was given out to guests who scanned a Bubblehouse QR code. Like Jonathan Simkhai’s NFTs, it will form the basis for future ‘premium’ access to the brand, for customers. Bubblehouse became the first carbon-neutral and eco-friendly NFT marketplace in December of 2021. It’s built on the Polygon blockchain, a climate sustainable blockchain that is over 99.99% more carbon efficient than Ethereum. Eckhaus Latta and Imitation of Christ also launched limited-edition NFTs during the week.

So far, this has been the main way that fashion brands have debuted NFTs — via single experiments that serve as additional consumer touchpoints. However, in conversations with metaverse experts, the resounding message is that long-term, community-focused NFT projects will achieve better results over time. New York Fashion Week would have been a good time for more brands to give their communities roadmaps as to their intentions in the metaverse.

However, not all digital-focused projects during fashion week centered on NFTs. Designers also collaborated with digital design studios to display their collections virtually in gaming environments and for users to wear them virtually. Jonathan Simkhai, known for his chic silhouettes and unique clothing details, worked with Blueberry Entertainment, a digital fashion production studio founded by Second Life creator Mishi McDuff, to take his collection virtual. The project also involved working with digital world developer Everyrealm.

At the start of the brand’s physical runway show on Monday, the pieces were shown within the virtual world of Second Life. Select items from the collection will be auctioned off as NFTs and able to be worn in dozens of other metaverse platforms.

While Second Life has a long history in the gaming industry, it has only recently become a go-to platform for brands wanting to create a digital presence in a virtual environment. According to McDuff, Second Life is one of the oldest metaverse environments, it contains the most user-created content, and it has a longstanding fan base. For Simkhai, the choice platform was about reaching the biggest fanbase while not alienating his existing one.

“It’s all about access and region accessibility, and community building,” he said. “The discovery element for the client who is a loyal Jonathan Simkhai customer, doesn’t miss a collection and consistently engages in all of our activations is exciting. It also brings up the idea of inclusivity — bringing access to a new customer who engages in the metaverse, but maybe isn’t familiar with Jonathan Simkhai as a brand. They now can engage and create their digital identity using these clothes.”

The idea of cross-channel access can be simplified into an omnichannel approach using technology. The Maisie Wilen and Yahoo hologram collaboration that debuted on Saturday was very focused on “reaching people where they are,” whether that’s at their home, with AR projections on their phone or in-person at the fashion week presentation, said Joanna Lambert, president of Yahoo.

The Maisie Wilen collection was also inspired by the unusual, which resulted in reflective holographic fabrics and optical illusion prints. In its “Big Ideas in Womenswear” report released on Thursday, WGSN and Faire has identified “digital wonder” as a continuing trend for designers, as they explore the liminal nature of future and fantasy inspired by the metaverse  While this was less apparent in the other designer collections, it could influence more designers in the next season.

Simkhai noted that, “Since Covid, we’ve really learned that we need to be nimble and adapt and try new things and find new ways to reach our audience. That’s meant putting technology at the forefront.” The conversation around the metaverse and fashion week is still only in its infancy, but it could spell an exciting future for New York’s event.

What the outcome of the Hermès MetaBirkin NFT legal battle could mean for fashion and the metaverse.