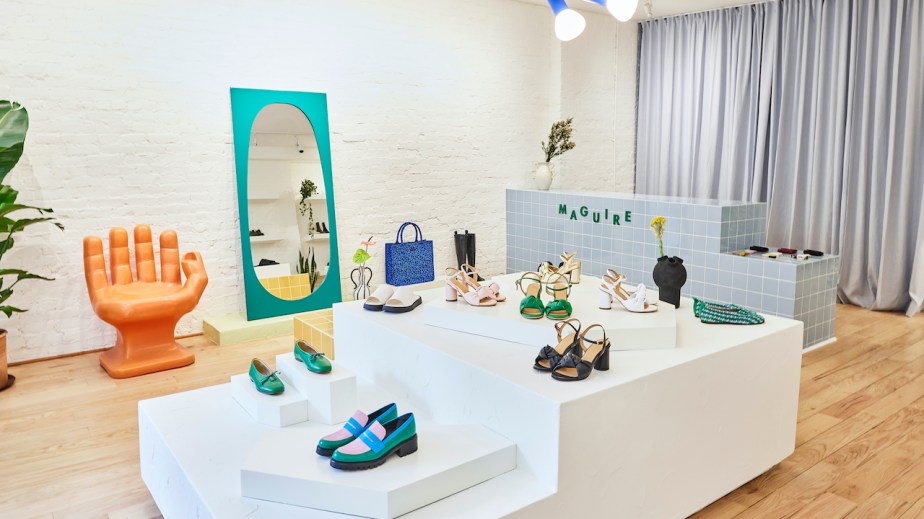 How pandemic real estate deals diversified the US fashion landscape

The retail landscape has been forever changed, thanks in part to brands striking while the iron was hot.

For international indie brands, U.S. retail’s turbulent last two-plus years presented an opportunity to establish a strong local presence via stores in shopping hubs that were formerly out of reach. Pouncing on “wishlist” U.S. storefronts when they became vacant — and discounted — set several fashion brands up for success in the market, according to their founders and CEOs. Among them: Maguire, Scanlan Theodore and Astrid & Miyu, based in Canada, Australia and the U.K., respectively.

Clearly, fashion brands in the U.S. are not alone in newly prioritizing diversification across their operations, including distribution. A means of safeguarding against one roadblock that’s sprung up during the pandemic is selling in multiple channels and markets.

“We were able to get 50% off of the lease,” said Myriam Maguire, of the brand’s store at 198 Elizabeth Street that opened on June 9. “We’re paying the same amount [in New York] that we’re paying [for our store] in Montreal. Before the pandemic, it would have been impossible to [get a store] here because it was just too expensive.”

According to the founders, retail leases in SoHo start at $20,000 a month and go as high as $50,000. They were told by their real estate agent that they got “the last deal” on the street when signing their 5-year lease in November 2021.

“We signed a long-term lease and were able to negotiate a slightly lower rate,” she said. “However, the market picked up quickly and the units we had been considering were hot property. We had to move quickly to ensure we got the space and the price that worked best for us.”

The street’s neighborhood feel and existing retailers, including Ba&sh and Aesop, were selling points, Nam said. Astrid & Miyu has nine stores in the U.K., including eight in London.

For its part, along with its Montreal store, Maguire has a Toronto location. It was scheduled for a March 2020 opening before government restrictions forced an 11-month delay. But even during that lag time, the brand’s online sales in the city tripled.

“People assume we have a lot of customers in the U.S. because we’re opening a store,” said Myriam Maguire. “But we’re entering the [U.S.] market with this store, and we’re going to get new customers with this store.”

The founders chose New York for the brand’s first U.S. store based on its close proximity to Montreal — especially compared to its other top sales market of L.A. — as well its strong marketing potential beyond locals. “Many people in the U.S. go on shopping trips to New York once or twice a year,” Romy Maguire noted. Of course, that’s not to mention international tourists.

According to the founders, for every store they open, they walk the streets of what they consider the city’s prime retail areas and personally call the numbers on “for lease” signs to inquire about promising storefronts. Typically, they go for “nice neighborhoods where people live and go to brunch,” said Romy Maguire. In New York, they heavily focused on lower Manhattan’s Prince and Spring Streets, and surrounding areas.

That hands-on approach is a signature of the founders, who started the business with a $15,000 work bonus that Myriam Maguire earned while designing shoes for Aldo Group. She quit her job and made a sneaker style in two colors, selling them for $200 a pair as a test. The founders then leveraged Kickstarter to get the company off the ground, first selling by pre-order, and have since survived on small business loans of $30,000-$50,000 a pop.

“We still have the line of credit for just one store,” versus three, Romy Magure said.

Ahead of the Nolita store’s opening, the founders spent months driving to NYC every 2-3 weeks to manage its buildout, traveling by Prius and staying in a Brooklyn Holiday Inn. Myriam Maguire purchased a trucker’s license to be able to cross the U.S. border with a U-Haul filled with boxes of shoes and other supplies.

“It’s the little things [we do] that make the store possible now, and we’ll just figure it out from here,” Romy Maguire said. “From the outside, we’re at the same level as our neighboring brands that have millions in funding. But behind the scenes, it’s Myriam and I inside washing the floor.”

According to the founders, providing a place for customers to touch and try on the brand’s products is key to earning their trust. For the NYC store, they focused on breathing new life into the traditional shoe store model. For example, customers can personally access their choice shoe style in their size via a closet. And, year-round, summer sandals are sold alongside winter boots. To eliminate the potential for high-pressure sales tactics, workers don’t work on commission.

Color was intentionally a focus, to ensure the store stood out among the neutral-hued stores on the street. And cost-saving design elements, like a curtain that serves as the closet’s “door,” were incorporated. Finally, transparency was prioritized, with scannable QR codes on shoes providing the same access as the brand’s website to information like its production costs and factory locations.

It’s one of multiple stores Maguire plans to open in the states. “New York is just  the beginning of the U.S. for us,” Myriam Maguire said.

Likewise, 35-year-old Australian fashion brand Scanlan Theodore has tapped into the pandemic opportunity to move into prime U.S. real estate. That’s been driven by Melinda Robertson and Sarah Blank, who, along with brand founder Gary Theodore, first launched Scanlan Theodore in the states in 2017. All three are co-owners of the brand’s U.S. business.

On May 6, Scanlan Theodore opened a store in Long Island’s Americana Manhasset mall, and it will open in Dallas’s NorthPark Center at the end of August. Finally, a D.C. store is slated to open early next year.

“We had a target wishlist of premium retail spots around the country. As a new brand, you can’t even get a seat at the table with these landlords,” Robertson said. “But then Covid happened, and we got a seat at the table. We just kept going for it. When everyone else was trying to pull back their leases, we approached all of these centers that we’d wanted forever and managed to get meetings and leases.”

She said the company landed ”really great deals,” which both included desirable rent prices and flexibility around the buildout of the stores. But snagging the key locations was a bigger win for the company, particularly as “positioning the brand as ‘upper-contemporary, lower-luxury’ is super important.” Co-tenants at CityCenterDC will include Brunello Cucinelli, Chanel and Max Mara, she said.

“We’re still self-funded, so this is a big leap for us,” said Robertson. “We took a bet that, coming out of Covid, the footfall at these premier centers would [bounce back]. Thankfully, it has. And so, now, the brand is in these centers where we otherwise would never have gotten in.”

Robertson and Blank left their careers in finance – at Goldman-Sachs and PIMCO, respectively – after years of earning constant compliments on their Scanlan Theodore workwear, according to Robertson. They grew up together in Australia, where the brand is the “preeminent lower luxury brand,” on par with Zimmermann, she said.

At first, Robertson and Blank distributed products from Robertson’s living room, before trialing a distribution center and eventually moving on to a showroom. They hosted a pop-up in SoHo, then opened their first permanent store in NYC’s Flatiron neighborhood in 2018. A store in Hudson Yards followed, in early 2019, as did a location in Miami’s Bal Harbour Shops. The brand will move its store to a larger space in that center in 2023.

Along with investing in stores, the company has recently invested in U.S. talent, including a head of retail and head of inventory, as well as a website developer and a marketer. It started running digital ads eight months ago and has established a strong marketing and sales channel in financial conferences — pre-pandemic, it hosted pop-ups at 10-20 conferences per year.

And, like Maguire, Robertson said, Scanlan Theodore consistently sees online sales boosts in markets with stores. As such, the brand is increasingly using its stores as distribution centers to save on postage.

From June 24-26, resale company ThredUp is sending push notifications to customers in the Bay Area, asking them to pledge not to shop Shein’s San Francisco pop-up, set for the same dates.

At the same time, the company is offering new customers 40% off ThredUp purchases to encourage shopping thrift over ultra-fast fashion. According to ThredUp’s Resale Report, 62% of shoppers say fast-fashion retailers encourage people to buy things they don’t need.

“Shein is one of the worst fast-fashion offenders. They list thousands of disposable, new styles every single day, encouraging endless consumption,” Erin Wallace, vp of integrated marketing at ThredUp, told Glossy. “When we heard they were coming to the Bay Area, we knew as an Oakland-based company that it was time to speak up. We prioritize educating consumers so they can make smart decisions about how they spend their dollars. Ultimately, we hope to spark conversation around the need for more reuse and less disposable fashion.”

House of CB branches out to new store concepts

British womenswear label House of CB is ramping up its brick-and-mortar distribution. After launching in Nordstrom’s stores and online in April, House of CB is planning a “large expansion” via both retailers and its own stores between now and 2023, said founder Conna Walker. The 12-year-old brand first opened its own store in 2013, and currently has partnerships with Selfridges in the U.K., as well as David Jones and Myer in Australia. The digitally-native brand plans to partner with another U.S. retailer, but Walker declined to share details. The first experiential store will open in London by the beginning of 2023.

“We’re not really a traditional brand in any sense; we don’t do releases like traditional brands, we focus heavily on DTC, and we don’t do wholesale deals. So finding a retailer [like Nordstrom] that has the ability to work in a more modern way was important,” she said. “Our planned brick-and-mortar expansion over the next year, with both retailers and our own DTC stores, is quite large. So as a self-funded, investment-free brand, we’re staggering the rollouts.” –Emma Sandler, sr. beauty & wellness reporter

Why Target revamped its 2022 Pride collection after criticism

Rhode has a clear-cut trademark infringement case against Hailey Bieber, but faces an uphill battle