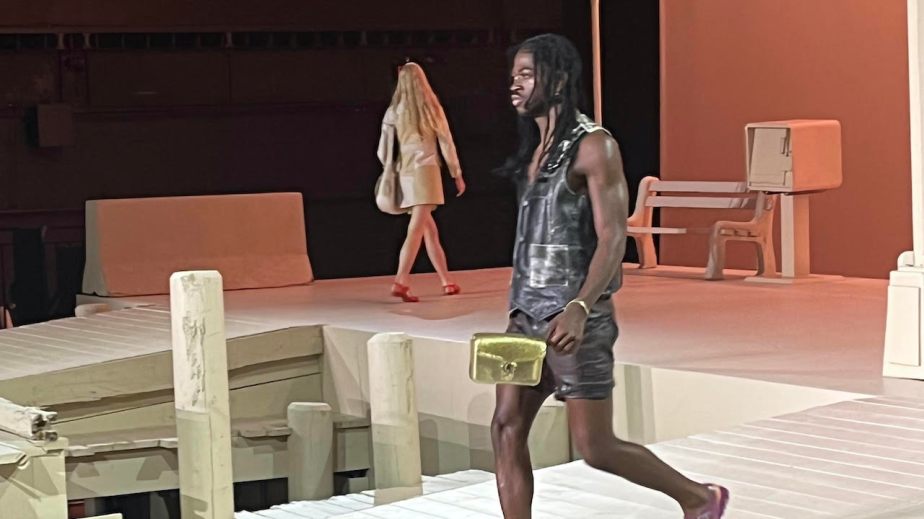 This week, a look at the strategies of fashion companies including Coach and Vogue that are enlisting Lil Nas X for key activations.

Like Selena Gomez and Michael B. Jordan before him, the 23-year-old rapper and singer will serve as the face of the brand. If history is any indication, that will involve appearing in marketing campaigns and collaborating on products. Brand executives declined to share the consumer-facing elements of the partnership ahead of their releases.

Backstage ahead of the fashion show, Todd Kahn, CEO of Coach, pointed to Lil Nas X’s history of operating beyond traditional labels and norms. “He is breaking all the rules, in terms of how masculinity is defined and music genres are defined; he innovating — and Coach has always been an innovator.”

Coach’s pioneering of the accessible luxury category, now populated with brands including Michael Michael Kors and Kate Spade, is one example of that innovation, for better or worse.

“Today, for a younger customer, real luxury is not about impressing [people], but it’s about self-expression and individualism,” Kahn said.

“And [their idea of] self-expression is not about one authentic self, but [rather] many selves; it’s fluid,” added Sandeep Seth, global chief marketing officer of Coach. “So [we’re asking], ‘How can we, as a fashion brand, be the conduit encouraging everyone to express themselves the way they’d like?’”

Coach is not the only brand that has leaned on Lil Nas X’s popularity and bold, individualistic style to connect with a like-minded Gen Z. For one, Vogue enlisted him to perform on its first-of-its-kind Vogue World runway, also on Monday. In August, he was appointed a YSL Beauty ambassador. And he’s represented brands including Versace and Harris Reed on the red carpet – in a hot pink cowboy suit and hoop-skirt-and-headdress combo, respectively. Lil Nas X’s own Instagram posts about these partnerships drive significant media impact value, according to Launchmetrics. His post announcing his Coach deal drove $417,000 in MIV in just two days.

And other fashion brands are getting into bed with stars who challenge the notion of gender norms, including Gucci with Harry Styles.

Khan, a 14-year veteran of the brand, was appointed CEO in mid-2021, after serving as interim CEO for nearly a year. Seth joined shortly after, following more than 20 years at P&G, most recently as CEO of beauty brand SK-II. Since 2020, under parent company Tapestry’s “Acceleration Program,” Coach has aimed to right-track the business, involving a pivot from marketing centered on pricing and promotions to values- and value-led messaging. Connecting with an expanded audience through partnerships with a “constellation” of celebrities has been a company strategy since shortly after its appointment of fashion-darling Stuart Vevers to creative director in 2013. Currently, the brand — which sells in over 50 countries — has more than 40 celeb ambassadors.

Seth said Coach’s history of starting in 1941 as a dream of immigrants was his draw to the company. And, he said, facilitating the same type of connection between Coach and both its customers and its ambassadors is crucial to the brand’s success. Ambassadors are chosen based on a specific value they share with the brand, ensuring authenticity and ongoing relatability, particularly as Coach ambassadorships rarely expire after one season. With Lil Nas X, that value was “his courage to be real,” Seth said.

To invest in the new iterations of Coach’s “icon” Rogue and Tabby bags, for example, young customers will also need to click with the brand. “[People] are not just wearing the ‘C’ [logo] for the sake of the ‘C,’” Seth said. “Instead, it’s about the values it connotes and the fact that they relate to them.”

It’s worth noting that both Coach and Little Nas X have recently received criticism for their perceived values. In October, TikTokers called out Coach for destroying unsold handbags. Also last year, conservatives shamed Lil Nas X for coming out with a “sacrilegious” video and product collaboration.

The Coach runway show served as a fitting announcement for the brand’s new direction, with great diversity in the model lineup and the absence of uniform hair and makeup looks. Likewise, similar ready-to-wear styles were shown in an array of colorways and styled with a wide assortment of accessories. “Make it your own” was the message conveyed.

On the same note, Seth reminded me prior to the show that Coach offers custom bags, allowing shoppers to choose every element of their purchase, from the lining to the hardware. The company plans to resurface the offering in future marketing.

While Lil Nas X did not perform at the Coach show, only walking the runway, it’s a safe assumption that Coach will embrace the opportunity based on the buzz surrounding his Vogue World performance. Other fashion brands haven’t hesitated to go there with their musician partners. For example, in 2021, to drive fanfare around a pair of Pacsun collaborations, ASAP Rocky performed an unreleased song at one of its stores.

But Coach did upgrade its usual show venue for Lil Nas X partnership debut, hosting 600 people at NYC’s Park Avenue Armory; it showed at smaller Pier 36 last season. And providing “experiential moments,” including in Coach stores, will be a priority for the brand moving forward, Seth said.

Already, Coach is “continuously” hosting pop-ups around the world to trial new concepts being considered for its store fleet, Seth said. Through Sunday, it’s hosting a pop-up in NYC’s Nolita featuring its collaboration with graffiti artists Mint and Serf. The company’s plan is to soon accelerate its rollout of pop-ups in the U.S. Ninety percent of the brand’s sales are direct-to-consumer.

“We want [Coach experiences] to build community, [engage] all five senses, and surprise and delight,” said Kahn.”If someone comes into our store this month, three months later, they should see something new and interesting.”

Seth added, “The brand has to be present in real life, as much as it is in the virtual world.” Rather than on a social channel, Coach teased the Lil Nas X collaboration last weekend on a billboard in Times Square.

Coach has made good progress in expanding its customer base, attracting 4 million new shoppers in North America in fiscal 2022, according to Tapestry’s latest earnings report. And now, it’s setting its sights on becoming a $5.7 billion brand by 2025. Remaining laser-focused on trend-setting Gen Z, while leveraging expert support, is key to that strategy.

“Partners can bring you to a new place,” said Kahn. For example, he referenced the wardrobe that Coach co-developed for Lil Nas X’s “Long Live Montero” tour, which kicked off last week. “Our teams and his teams [came together to] create six compelling looks that still represented the Coach brand, but in an unexpected, nontraditional way.” A Coach-logoed horse is being used as a stage prop, and the looks include a gold gladiator suit.

“In fashion, when you can take the mundane and make it interesting, or you can match different ideas together, that’s what becomes new and innovative,” Kahn said.

Week in Review: Glamour, diversity and the metaverse at NYFW

NYFW designers struggle to strike a balance between creative and commercial