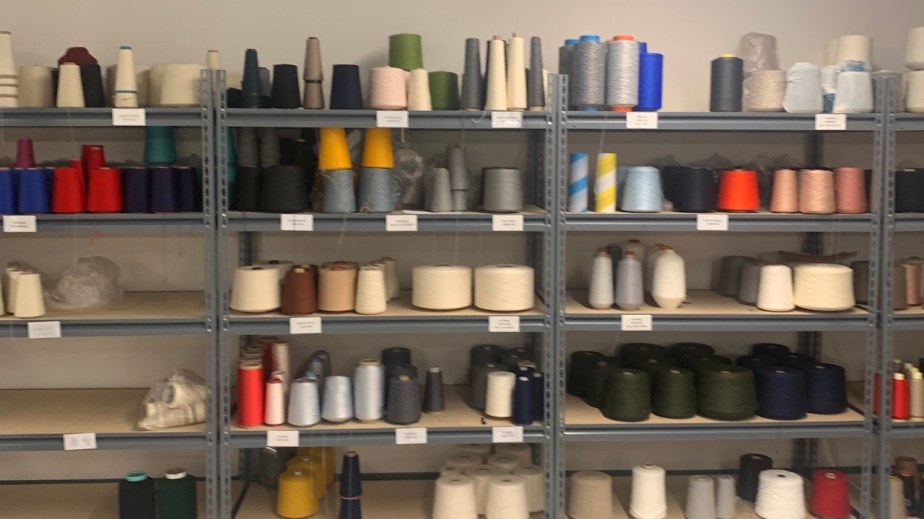 Fashion Briefing: Can knitwear bring back fashion jobs to the U.S.?

This week, we look at the potential for a Midwest fashion capital via a knitwear factory and the progress around circularity.

Knitwear has become cool again. In step, a Midwest knitwear factory that seems made for the post-pandemic era has opened its doors. Named Evolution St. Louis, its pitch to brands is sustainable, convenient and affordable manufacturing — more so than they’ll find overseas and in NYC. And the offering is set to transform the industry, according to the founders. But is the future of fashion in Missouri?

Founders and industry veterans Jon Lewis and John Elmuccio are making a big bet that it is. After taking two-and-a-half years to get their idea off the ground for a large-scale knitting operation in the U.S. And, they’re not wasting any time in rolling out their grand plan. They opened a 32,000-square-foot facility in St. Louis’ Arts District in February 2020. It currently houses 32 Stoll flatbed knitting machines, and 20 more are on order — it will eventually operate 50. And they’ve leased a second, 130,000-square-foot facility on St. Louis’ Mississippi riverfront that’s set to operate 240 machines. It will open by the end of 2022.

“We’re trying to redefine what manufacturing means in the United States, including in the fashion apparel space. We’re building an industry sector here: flatbed knitting,” said Lewis, who noted that, at the turn of the century, St. Louis was the second-largest producer of fashion and shoes in the country after New York. “The goal is to put St. Louis back on the national map — to become a part of the [fashion] ecosystem by bringing brands here. If you want it done in the U.S., we’re the only game in town that’s scalable. You could do 300 units or 30,000.”

After struggling to secure adequate funding in Detroit, Lewis and Elmuccio found support in St. Louis through designer Timo Weiland’s connections. Lewis and Elmuccio had formerly invested in Weiland’s namesake brand, and Weiland has family in St. Louis. Saint Louis Fashion Fund founder and board chair Susan Sherman facilitated a meeting with “people from the mayor’s office and the [city] development office, real estate people, investors and bankers,” said Lewis. That led to investment from the St. Louis Manufacturing Opportunity Zone Fund.

“We accomplished in six months what would have taken us two years to accomplish anywhere else,” Lewis said.

Evolution St. Louis currently has 47 styles in development, ranging from fashion pieces to knee braces to woven uppers for sneakers. A face mask takes about six minutes to make, while an intarsia sweater takes 30-40 minutes. As it stands, Evolution has the capacity to produce 25,000 units per month. It has 26 employees, up from four at this time last year. Its next round of hires will be for 125 people.

According to Weiland, whose brand produces knitwear at Evolution, the company has legs. He called it the “Apple product” of factories, thanks to its cutting-edge technology and the efficiencies it offers customers.

I’m from St. Louis. And in April, I took a tour of Evolution’s shiny, eco-friendly facility while staying with family. Lewis and Elmuccio walked me through the production process, from the design room, where three staffers (there will eventually be six) get tech packs from fashion brands and program every stitch, to the knitting floor, where spools of yarn are being fed into knitting machines. Most everything is digitized, including the washing, drying and steaming processes. Other than sending brands a fabric swatch to ensure details like thickness, the sampling process is digital, too.

“We built our factory to be just like working with an overseas factory,” said Lewis. “We can work with yarn sources and suppliers, and ship products to your warehouse. We’re making it so it’s not hard to do business in the U.S.”

Evolution’s target fashion customer is contemporary and advanced contemporary fashion brands, and its pricing to produce is competitive, “We’re within 5% of Asia, and definitely better than Italy and Turkey,” said Lewis. “Plus, it’s a lot easier to get here than Shenzhen.”

That convenience was a selling point for Weiland, who used to travel 27 hours to China seven times a year to oversee his brand’s production. “We’d then have to airlift the bulk production units or they’d spend two months on a ship. But to ship from St. Louis to either American coast, it takes a day or two.”

Weiland also noted the environmental harm of producing overseas: “The carbon footprint is large, from going to the factory to shipping the goods to getting the raw materials from the far reaches of the world all the way to China.”

Even producing in New York is out of reach for many brands, and now that working anywhere flies, there’s really no point to doing so, said Elmuccio.

“The garment center of New York is just so antiquated,” said Weiland. “It would be so difficult for anything even remotely close to [Evolution] to operate in New York, just because of the costs and the limited space.”

“What we’re doing hits on a lot of cylinders,” said Lewis. “We didn’t need a pandemic to prove our business model, but it helped; Covid showed the weakness in the U.S. supply chain in every category, not just in apparel.”

In addition, the pandemic motivated more brands to further concentrate on their direct-to-consumer businesses. Producing locally via a factory like Evolution facilitates the objectives of many DTC brands, including speed to market and inventory control. “You can react to demand, rather than attempt to forecast it,” said Lewis. “Plus transparency in the supply chain is easier here than in rural China.”

What’s proving a speed bump for Evolution is attracting enough local talent — it should have a staff of 40 now, versus 26, Lewis said. Part of that is that St. Louisans specializing in tech and apparel are still in the mindset that you need to move to the coasts to build a career, he said. Evolution has already relocated multiple employees to fill roles.

But the company is investing in PR, as well as outreach to brands. It’s seen interest from companies including Marc Jacobs and Ralph Lauren, according to Lewis. And while it plans to get off the ground by working with brands in the U.S. and Canada, it has global ambitions. It helps that much of the innovation in apparel is around “yarn technology,” said Elmuccio.

“Our whole industry is just stuck in the way things used to be, and no one can really break away from that,” said Lewis. “But we’re trying to be the factory of the future.”

How Ministry of Supply is pioneering fabric innovation

Americans are purging apparel ill-suited to life post-pandemic, and it’s ending up in landfills. In response, performance-meets-business apparel brand Ministry of Supply has launched a new program focused on circularity.

An extension of its Aero Zero collection, made up of carbon-neutral shirts composed of 100% recycled materials, the brand launched in late April the Infinity Program. It allows customers to send back the brand’s $125 shirts for $50 in store credit, thereby giving the garments a longer life. The program is powered by a partnership Taiwan-based with Shinkong Textiles. The latter has developed a mechanical and chemical recycling process ensuring that fibers that are broken down in the recycling process are respun to be just as strong and soft as the original.

Ministry of Supply, which launched as a direct-to-consumer brand in 2012, has gained much press since 2017 for the 3D knitting machine it set up in its Boston flagship. The machine facilitates an innovative retail experience, making custom-fit blazers for shoppers as they browse.

“Twenty-six percent of our production last year was robotically knit product,” said Gihan Amarasiriwardena, co-founder and president of Ministry of Supply. Much of that was produced in a factory in L.A.

And, he said, Ministry of Supply is continuing to explore innovations in fabric and production. There are two fiber categories that the brand is focused on, with the first being biobased synthetics.

“Our Kinetic pants are 15% based on corn-based polyester,” he said. “You can now run [corn] through a distillation process and polymerize it into polyester, instead of using a petroleum-based polyester. At the same time, you’re capturing carbon dioxide into the core of the fiber, which, from a climate perspective, is something we’re really trying to push forward.”

The other focus is fiber circularity: “One of the challenges to date with recycled materials has been the purity of the fiber,” he said. “With single-stream recycling, it’s possible to recycle a lot more, but there are lots of different types of plastic that get mixed together. So it’s hard for textile mills to have consistency, or to say that a fiber is going to act the same way as the [fiber it’s substituting].”

As a solve, Ministry of Supply has been sourcing from Japan most of the plastic bottles it uses to make its Aero Zero collection. “They have a really diligent trash sorting process that consumers are engaged in,” he said.

The Infinity Program aims to ensure that those recyclable garments actually get recycled. “[In the U.S.,]  there’s not yet an infrastructure for that.”

Moving forward, Amarasiriwardena said, more fabrics will be hybrids, driven by the new normal of working, lounging and exercising in the same styles. There won’t be a sharp difference between running apparel (typically polyester) and loungewear (cotton), for example. Also, casual knits and formal wovens will intermingle. Ministry of Supply has already embraced warp knitting to create dress shirts that stretch.

Ralph Lauren is letting shoppers give its polos a personal touch.

Luxury brands are going bigger than ever with their OOH ads.

Mack Weldon is the latest DTC brand to hire its first-ever CMO.

For A$AP Rocky, “comfortable” fashion is kilts and pearls, not sweats.