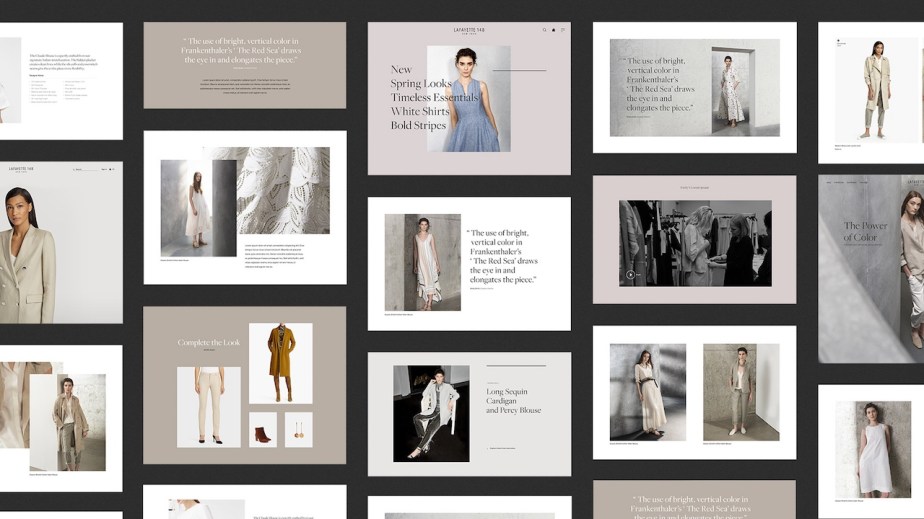 ‘Devastating to small companies’: How fashion brand Lafayette 148 is dealing with tariff changes

A major theme of the Trump presidency so far has been the ongoing turmoil with China over trade. The recent tariff raises from the Trump administration, which saw a 10% increase in tax on certain imports from China including apparel and footwear, are one such result of this conflict. Those tariffs have fashion brands, particularly smaller ones like Lafayette 148, concerned for their futures.

“Tariffs on goods imported from China are devastating to small companies like us,” said Deirdre Quinn, CEO and co-founder of Lafayette 148. “They have added millions to our cost of goods that we can only gradually factor into the prices of our collection, if at all. The initial tariffs only affected specific sectors of our collection, [like footwear], so we were able to adjust our assortment to minimize their impact on our retail partners and customers. The recent changes are unbearable because of their scope and suddenness. All the goods that we import from China will be subject to heavy tariffs.”

The most recent round of tariff increases has caused consternation among fashion brands. Rick Helfenbein, president and CEO of the American Apparel & Footwear Association, called them “truly shocking” in a statement immediately following the initial announcement, and brands like Badgley Mischka and organizations like the CFDA have also condemned them.

As the CFDA noted in its response to the tariffs, larger brands and retailers may be able to eat the costs of increased tariffs without the consumer even noticing but smaller brands may have no choice but to pass at least some of the costs on to the consumer, which can hurt their relationship with customers. Lafayette 148 expects its costs per item to double, but for its newest collection, there was no time to factor doubled costs into their product prices.

(After this story was published, a representative from Lafayette 148 said that doubled costs was a misstatement, and that costs will actually go up by between 8% and 15%. The company is still working through how prices will be affected, if at all, by the increase in costs.)

“Luxury retailers carrying numerous brands can expand their offering to include brands that are produced in non-tariffed countries to help control prices,” said David Naumann, vp of retail marketing at retail software company enVista. “As European countries retaliate with corresponding tariff increases on goods exported from the U.S., as is expected [due to the ongoing legal dispute between the U.S. and the EU over Airbus and Boeing], it will also impact the volume of U.S. product orders from Europe and significantly impact the revenues for U.S. brand exports.”

China has become a major market for fashion and is now the largest consumer of luxury goods in the world. Many fashion brands either do business there — by operating their own stores locally or through Chinese retailers — or manufacture there. The tariffs the president announced Aug. 23 were put into effect just a week later, Sept. 1, which Quinn said was nowhere close to enough time for a smaller brand to put any sort of practical plan or safeguard into effect. The impact will also hit women’s brands more than men’s, since nearly twice the amount of women’s clothing comes from China than men’s.

Lafayette 148 was hit particularly hard as a company that specializes in women’s clothes with most of its stores in China (15, compared to only six in the U.S.). While the brand brought in $160 million in revenue in 2017 and has only had sales dip once since it was founded, it’s still small enough that unexpected tariffs can throw a serious wrench in its plans.

“We are always reviewing our sourcing strategy to make sure that we are taking advantage of the most sustainable and efficient vendors who can produce clothing at the quality we demand while balancing that against the value we place on long term relationships,” said Vince Phelan, CFO of Eileen Fisher, another brand that has been hit by tariffs. “We have, though, revisited our sourcing strategy and reliance on vendors in China more quickly than we anticipated because of the increase in tariffs. With the hope of offsetting the financial impact of these increases, we are exploring vendors in different countries with similar and/or more innovative capabilities.”

These rapid changes can also put a strain on the relationship between American brands and the Chinese factories and retailers they work with. Phelan said that in response to tariffs, Eileen Fisher will be sticking with some Chinese factories that have skills that are not easy to find elsewhere while moving some production to other countries.

“The recent tariff increases, which are so wide-ranging and abrupt, make it clear that we need to work with our partners and clients to ensure that they will be there for us, so that we will continue to be there for them,” said Quinn. Lafayette 148 moved all production to China a few years ago and owns its own factory. “Our subsidiary in China produces our collection. They, in turn, work with other partners in China. All of them will have to play a part in our long-term plan. To put it simply, a global crisis calls for a global solution.”

Trump’s latest tariff threat is focused on European luxury brands, threatening the ease with which they can sell in the U.S. which comes with its own set of problems. Namely, tariffs on lower-priced goods leave a bit of room for leeway in terms of where those costs will be made up, while luxury brands do not have that option.

“Unlike the tariffs on commodity goods, tariffs on luxury goods don’t offer U.S. retailers options to source goods from other countries to avoid paying the tariffs,” said Naumann. “Retailers have no choice but to pass the extra costs on to consumers by increasing prices. For brands that compete with products sourced from other countries, this could have a significant impact on revenues. The only potential compensating factor is that many luxury retail consumers are not as price sensitive.”