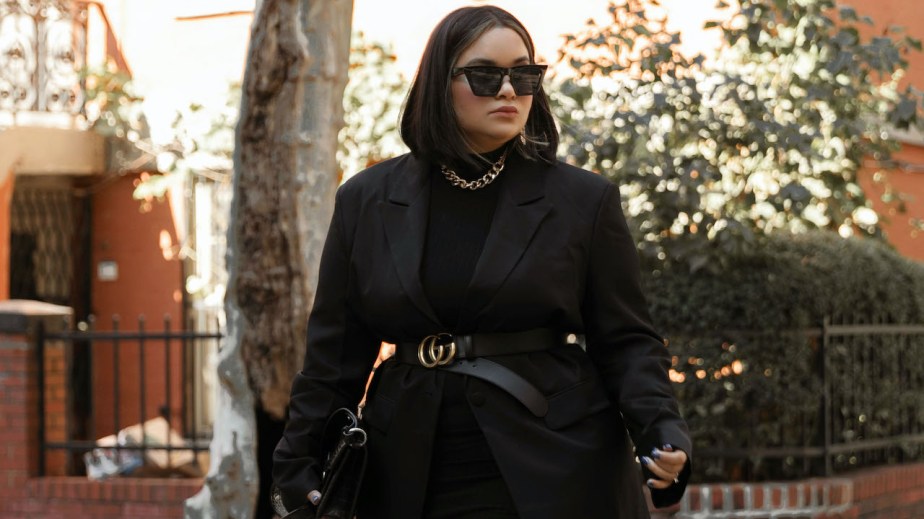 Brandy Melville is offering “one size fits most” (read: small) clothing, lingerie-giant Victoria’s Secret is still fumbling with size inclusivity and many brands are still showcasing their products on only one type of body. In response, TikTok’s “fit-fluencers” are aiming to change the fashion industry with the simple yet radical act of trying on clothes.

New Jersey-based Denise Mercedes (@denisemmercedes), a body-positive influencer with 2.7 million TikTok followers and 1.1 million Instagram followers, signed on to the social platforms when she realized her first passion, modeling, wasn’t going to work out. “I was too short,” she said.

“I was posting clothes that were more revealing, clothes that plus-size women wouldn’t usually wear,” said Mercedes. “I guess that’s why I was considered inspiring to girls who were my size and bigger.”

After moving to TikTok in November 2019 and creating video versions of her Instagram outfit content, she reached out in February 2020 to her photographer, Maria Castellanos, with an idea for a video series: Both would wear the same styles on camera and discuss their fit, sizing and style on their different body shapes. (Castellano is straight-size). They’d also compare their try-on with the brands’ own product imagery. For example, in a video posted last week, Castellanos suggests an Asos dress would be perfect if the two were “to stand like mannequins,” and Mercedes quips that a bend-over would lead to “arrest.”

The series, which they dubbed #stylenotsize, caught on. The hashtag has since accumulated 225 million views on TikTok.

“[We wanted to] showcase that, even though we are different sizes, we can both still look pretty amazing in what we are wearing,” said Mercedes. “[We’ve been] spreading the message of not being ashamed of who you are and being happy in the skin that you’re in.”

Mikayla “Mik” Zazon (@mikzazon), an influencer from Columbus, Ohio with close to 900,000 followers on both TikTok and Instagram, created the #normalizenormalbodies movement that has led to hundreds of thousands of social media posts with fans celebrating their own bodies, in all clothing. However, when Zazon started posting on social media in 2017, it wasn’t with body positivity in mind.

“I was a weight loss coach, fitness influencer, body power builder and powerlifter,” she said. “I was focusing on all the wrong things.”

After hitting a self-described “rock bottom,” Zazon entered an eating disorder recovery treatment program and shared her full journey with her followers. She also corrected her past dieting and weight loss tips that she now viewed as misinformation.

“That was around the time when the #normalizenormalbodies started,” said Zazon. “I had just gotten out of therapy and dietician appointments, and they had given me a letter board where I could configure letters to make a word then take a picture of it. I looked at the board, and I was taking in all the information from my doctors, and the phrase ‘normalize normal bodies’ just came to mind. I took a photo in a bikini [with the hashtag] and it went mega-viral on VSCO, Twitter and Instagram.”

On Instagram, the hashtag has been used in nearly 200,000 posts. “It’s just filled with women in [eating disorder] recovery, trying on clothes,” she said.

Brands have slowly been working to get it together by improving their sizing and product imagery for a wider range of bodies. Fast-fashion brands including American Eagle and boutique staples like Diane Von Furstenberg have started investing in an expanded size range and featuring models of more sizes in their campaigns.

Mercedes and Zazon have taken part in numerous partnerships with fashion brands that, in their eyes, are getting it right. That includes Summersalt, Aerie and AdoreMe. Zazon said that even Abercrombie, the mall staple of the early aughts that has come under fire for fatphobia, has started to change, with Zazon’s careful guidance on sizing inclusivity.

“I partnered with (Abercrombie) so many times in the past year and a half because they have taken initiative and learned from their mistakes,” said Zazon. “They used to say: only this body type, only cool kids with a certain size are fitting in our clothes, no one else. Now I am working with a company with completely different management and completely different morals, and they are learning from me. They are learning from their mistakes.”

But these brands aren’t perfect. Some of Abercrombie’s clothing only goes up to a size XL, which Zazon finds “unacceptable,” but the growth is promising. Both Zazon and Mercedes attribute these changes to social media and the push from influencers and regular consumers alike for more inclusivity.

“Call [brands] out on their crap, because that’s how they learn,” says Zazon. “That’s how I learned. People called me out so much when I was going through recovery, and I learned from that, and I owned up to that. It’s not doing it in a cancel way, it’s giving them an opportunity to learn.”

Mercedes agreed: “When we post our videos and our photos, it’s like we’re demanding that they meet [these standards]. Brands have finally heard us. That’s why they’ve started doing what they’re doing.”