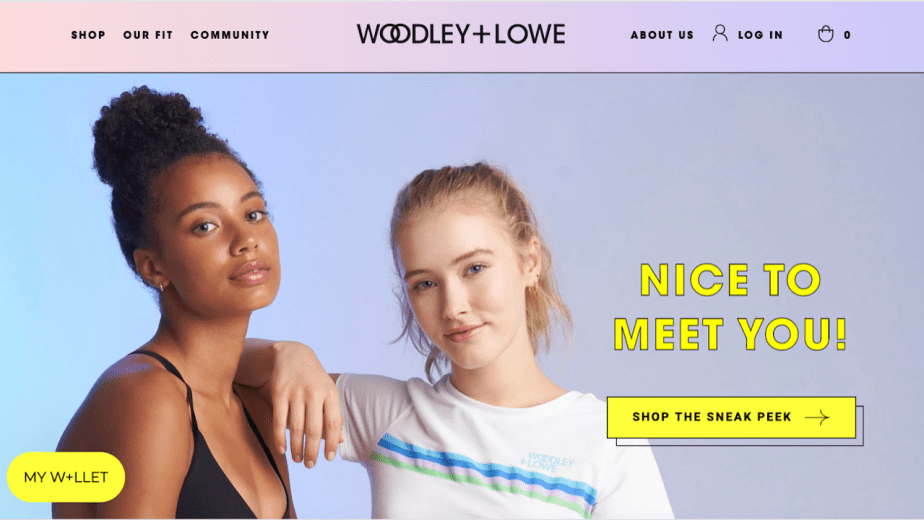 The anti-Brandy Melville: A new fashion brand is making a play for Gen Z (and their moms)

Woodley + Lowe is setting out to be the brand that both teens and their moms can get behind.

The DTC apparel brand, which launched this week, is doing all the right things, in terms of answering the supposed demands of its target demo: girls ages 13-21. It’s community-focused, size-inclusive, comparatively affordable (with styles priced $35-$100; Brandy Melville jeans are $40), eco-conscious and charitable. Three percent of its revenue goes to organizations supporting the environment, body positivity and equal rights.

Founders Rachel Thebault and Neda Talebian Funk are moms, and are all too familiar with the hot teen brands of the moment. That includes the aforementioned Brandy Melville, which exclusively caters to girls sizes 0-2 and specializes in crop tops.

“Gen-Z girls are stuck between having to buy fast fashion or overpriced, for them, women’s clothes,” said Thebault. “We saw a need in the market for everyday, basic apparel that is age-appropriate.”

The fizzling state of the tween apparel market spells opportunity for companies that can swoop in. The juniors’ department — with its odd-numbered sizing scale made for teens — is becoming extinct along with mainstream department stores. This year alone, tween retailer Justice closed 600 stores and announced it will be closing 23 more as part of parent company Ascena Retail Group’s bankruptcy. And tween brands from Delia’s to Limited Too have closed their doors since 2015. According to a 2018 study from Barkley, Gen Z spends an estimated $143 billion a year, excluding what their parents spend on them.

Retailers aren’t wasting time: On September 22, fast-fashion company Mango released a new collection aimed at girls ages 11-15. In late July, Old Navy and Popsugar announced a clothing collaboration, PSxON, for 11- to 13-year-olds. Lisa Sugar, founder and president of Popsugar, said a goal was “to reach a new, younger generation of tweens” and that the line has been exceeding sales expectations since launch. And last year, just in time for back-to-school, Target launched a private-label tween line, More Than Magic.

Woodley + Lowe launched e-commerce on Monday, and followed with a marketing push via an email and Instagram posts on Wednesday. The founders initially planned for an August launch, to get in on the downsized back-to-school sales, but the pandemic forced holdups in the supply chain. Inventory for the first, 12-piece collection won’t arrive until early November, so the brand launched with a pre-sale of three items, and it will host a second pre-sale later this month.

The items now being sold include a logo tee, a hoodie and joggers that have proven popular among the brand’s 53 unpaid ambassadors and focus group of 160 girls. The latter group takes polls about their style preferences through the Instagram account @thebrandadventure.

Resonating with the demo is easier said than done. Based on its first-party data on Gen Z’s values, Popsugar ensured its Old Navy collab was inclusive and read as positive. It’s also been widely reported that the age group values diversity, sustainability and authenticity. But Brandy Melville, which offers one small size, remains popular. And a Piper Sandler survey released on Tuesday showed that Gen-Z’s favorite e-commerce sites are wasteful Amazon (chosen by 54% of respondents) and problematic Shein (5%), known for ultra-cheap styles like $12 bikinis.

Woodley + Lowe looked to learn from Gen Z out of the gate. It launched a landing page in May that captured emails and requests to join the ambassador program. At the same time, it launched an Instagram account run by a social-savvy teen intern that drove to the site.

The brand’s ambassadors range from freshmen in high school to recent college graduates, and are based in cities all around the U.S. Pictures they took of themselves while testing product samples now appear on the brand’s website. “It’s important for girls to come to our website and see what real girls look like wearing our clothes — not just models,” said Thebault.

To date, the brand has been hesitant to invest time in TikTok, considering recent uncertainty around its future, but the plan is to use the platform as a marketing tool by reposting videos of ambassadors wearing the styles. Woodley + Lowe is relying heavily on ambassadors to spread the word; Thebault called it a “girls-influencing-girls kind of approach” to marketing, which she believes will work to build brand loyalty and an emotional connection with shoppers — more so than pumping money into digital ads.

Woodley + Lowe shoppers can manage a Wallet (“W+LLET”) on the brand’s site, where they get dollar-based rewards for referring friends based on the amount that those friends spend. Clothing allowances and gift cards can be deposited into a teen’s Wallet by family members. Ambassadors receive regular deposits in their Wallet from the brand, as well as individual promo codes for their friends and family.

“They’re like mini salespeople for our brand,” she said, noting that getting the ambassadors to invite their friends to shop is more fitting than asking them to post on social media.

“We don’t rely on our ambassadors too much for social posts, because girls are very self-conscious about their personal brands at this age,” she said. “If they’re not an actual influencer, they don’t want to be seen as trying to be one.”

It’s worth noting that the brand raised a friends-and-family investment round that proved smaller than planned, which Thebault blamed on the “tricky year.”

“It made us really look at how we’re building the business and how to make it profitable from day one,” she said.

Because the founders didn’t come from a fashion background, they made a point to team with experienced leaders at every step. For example, they appointed design director Christie Orlando, who launched Alala and Gwenyth Paltrow’s G. Sport, and consulted with The Angora Group when choosing manufacturing partners to ensure they were weighing all options. For its website, it turned to Tomorrow Agency, which launched and manages Bombas’ website and rebranded Bandier’s.

The plan for the website was to make it interactive and to infuse personality, though the developers advised holding off on some the founders’ requested features until the brand built out its shopper base — that included a page allowing shoppers to post answers to rotating questions on a virtual “sticky notes board.”

Down the road, marketing to the teen mom through Facebook and Instagram will be a focus. “It’s the kiss of death to go to the moms first; we want the discovery part to really come from the girls, but we will get the mom’s approval. Unlike with other brands, she won’t cringe when the daughter says she wants something from us.”

Woodley + Lowe uses a letter-based sizing scale of A-E, “to take the body image stigma out of physical size names,” said Thebault. The sizes are based on CDC measurements for teens, and the measurements and feedback of a dozen teen fit models. Size A is equivalent to a size 12-14 in kids’ clothes, and E is about a 10-12 in women’s. All pants come in two lengths, to address that “some of these girls shoot up [in height] and then fill out, while others gain a lot of weight and then grow.”

Most of the Woodley + Lowe staff is freelance-based, though a community manager will be hired in the weeks ahead. The goal for year one is to continue to learn the industry, listen to the shopper and build a loyal customer base, said Thebault.

After launching DTC, the founders are open to partnering with a retailer — a concept store with other brands targeting the same market would be ideal, she said. However, she acknowledged the current advantage of being a comfort, lounge-based brand on an e-commerce platform.