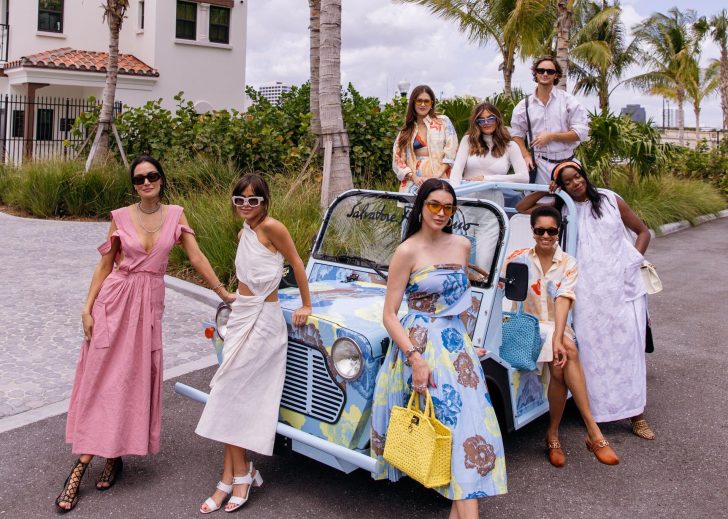 Are FL and TX fashion’s new NY and CA?

Texas and Florida are fast becoming epicenters for a new era of American fashion.

In previous years, New York and California have reigned as key states for the fashion industry. New York, after all, is the cosmopolitan capital of the fashion world where heritage American brands like Tory Burch, Donna Karan and Calvin Klein cemented their place in the industry. It has also hosted the country’s fashion week since 1943. On the East Coast, California, best known for its sustainability legislation and host of modern, free-spirited brands like Cult Gaia and Reformation, has also played a key role in the fashion industry, hosting trendsetting events like Coachella.

However, with both markets seeing saturation, even local brands, like Cult Gaia and Jenni Kayne in California, are exploring new markets in the South. Miami is the third largest market for Cult Gaia, according to WWD, and the company opened a year-long pop-up in the Miami Design district on Thursday. The brand hopes to make it a permanent fixture.

For fashion brand Jenni Kayne, Florida and Texas have both become key markets. “The South, in general, has become more of a focus for us in the past few years, as the Jenni Kayne audience has expanded meaningfully into every state. Some of our Southern cities are becoming real standouts,” said Lauren Holmes, chief commercial officer at Jenni Kayne. Hayne highlighted Dallas, Houston and Austin as key areas in Texas, and said that cities outside of Miami have also seen good growth in Florida.

The reasons for this are related to seasonality and the migrational shift, where wealthier residents and businesses are moving to states with lower tax brackets. There are financial considerations here, too. Florida has seen a collective wealth increase of $17.7 billion from 2019 due to population migration trends, according to IRS data compiled by nonprofit Wirepoints. And, with its 5.5% tax rate, the state is seen as a good area for businesses.

“The pandemic made living in Florida, in particular, the majority of the time or even year-round a possibility for so many people who would have previously only considered it for a second home or vacation destination,” said Holmes. She also noted that choosing retail markets is tricky, in that brands must know with certainty that a few strong months will make up for sluggish months when the majority of their customers are away at other homes. Since the start of the pandemic began, however, many seasonal markets aren’t as seasonal anymore, she said. As such, many brands are considering them for permanent store locations. That includes Jenni Kayne.

Jenni Kayne is also considering opening a store in Houston, and it recently opened an Atlanta location. The brand would be part of a cohort of brands moving into TX — they include LoveShackFancy, Salvatore Ferragamo, Louis Vuitton and Kith, as well as resale site ThredUp. Each is either opening new stores or developing supply chain links in the state.

Texas is also a key market for brands like Savage X Fenty, which opened a new store in the Houston Galleria in mid-March.

“When exploring locations for our retail stores, it was important for us to be in close proximity to our VIPs,” said a representative. “Houston is a big market for Savage, and we are now offering an inclusive and immersive shopping experience for that community.”

For its part, LoveShackFancy’s set up half of its stores in the South. Focusing on cities like Houston and Miami, the brand has seen a rise in interest in the brand among younger consumers in the areas, partly thanks to its connection to Bama rush. According to the New York Times, a third of the company’s revenue comes from stores, and many of the Southern stores often have lines out of the door. Before the pandemic, wholesale made up 70%of the business.

For ThredUp’s part, it’s gearing up to launch a U.S. flagship distribution center in Dallas, TX this summer. Upon completion, the processing center will bring ThredUp’s network-wide capacity to 16.5 million items, a 150% increase from its current capacity. The company also has two new online processing centers in Grapevine, TX and Lebanon, TN. They’ll focus exclusively on online processing and will serve larger facilities in Dallas and Atlanta.

ThredUp President Anthony Marino reported in a call that the reason for the location was mainly logistics costs and workforce availability, which are better in Texas. “When we think about where we place our facilities, we’re trying to triangulate a couple of different things: the logistics costs, to service our customers; the labor markets, so the availability of workforce in the area to support our growth; and availability in the area,” he said.

Even e-commerce retailers are reporting outsized growth in Florida and Texas. On MyTheresa’s Q3 earnings call last week, MyTheresa CEO Michael Kilger said, “We continue to see strong demand of luxury consumers, particularly from states like Florida or Texas. Logically, we therefore focused our activities in these states in the third quarter with high-impact customer events. People are spending their disposable dollars on unique and special pieces and are dressing up.”

The retailer hosted a physical pop-up and dinner in collaboration with Vogue in Palm Beach and a shopping lunch hosted for them in Dallas by Tina Craig, a local brand ambassador. The U.S. is the retailer’s strongest growing region: In the quarter, GMV in the U.S. increased 42% year-over-year. The U.S. made up up 16.4% of Mytheresa’s business in Q3, up from 13.1% from the year prior.