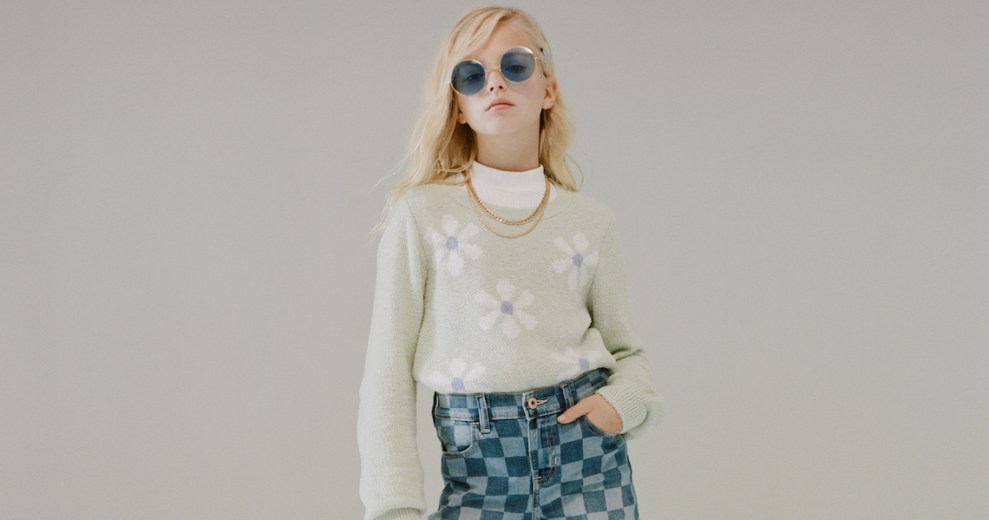 ‘Allowance is paid in Robux’: How Abercrombie updated its kids’ line for a new generation

Children’s fashion is among the more complicated sectors of the fashion world. Kids grow quickly and they put an immense amount of wear on their clothes. That’s not to mention kids apparel brands have to market to two customers simultaneously: the kids who wear the clothes and the parents who buy them.

But with children’s fashion reaching $40 billion in sales in the U.S. last year, brands like Abercrombie & Fitch are upping their focus on perfecting their approach to the children’s category.

Most notably was the decision to commit to making it as on-trend as the company’s adult styles. When looser jeans were first becoming a bigger trend for adult women, Hall said she made the decision to make the same move in the kids’ line.

“It became clear that we need to go beyond basics and focus on trend,” she said.

Especially in the Instagram era, style-conscious adults want their kids to be dressed on-trend, as well. And children in the tween age group are tuned into trends themselves. In 2019, when the refocusing first began, Krug and Hall talked to hundreds of children in focus groups to find out what they were interested in wearing. According to Krug, the 9- and 10-year-olds she and Hall spoke to when finetuning the brand vision were aware of what was in style, thanks to social media and observing their parents, older siblings and celebrities.

Brand collaborators, like influencer Jen Reed (1.2 million Instagram followers), who designed a collection with the brand in late 2020, are now asked to team on styles for both the adult’s and kids’ lines. Sometimes that means making exact copies of adult styles to enable mini-me moments. Other times, it involves making kids’ clothes that follow the same trend.

But Hall said not every trend that works for adults can be easily translated to kids. Cropped band T-shirts, for example, had a boom for Abercrombie in mid-2021, but the team didn’t feel comfortable selling crop tops to 9-year-olds. Instead, the same band logos, prints and colorways were translated to standard T-shirts for the kids’ line.

Krug said marketing kids’ clothes is a complicated matter. Instagram remains the dominant channel for reaching parents, but kids are more fragmented, in terms of where they’re spending their time. Many use Instagram, but other channels like gaming platforms are becoming increasingly important. Krug said Abercrombie is planning to soon roll out a Roblox partnership that’s intended to capture the tween market, but details are still under wraps.

“With my kids, allowance is paid in Robux,” Krug said, referring to the proprietary currency Roblox uses for in-game purchases. “That’s where a lot of kids are spending their time. We’ve also worked with Nickelodeon on some custom content for their YouTube channel.” Nickelodeon has nearly 10 million YouTube subscribers, and Roblox has more than 40 million daily active users, 30% of which are ages 9-12.

Marketing directly to kids is necessary because the parents who buy for them are, for the most part, not Abercrombie customers themselves. Krug said only about 20% of adults who buy Abercrombie Kids also buy from the adult line. Abercrombie has been relying on targeted Instagram ads to the brand in front of parents.

One area of children’s fashion that’s significantly evolved in recent years is how brands deal with licensed apparel, meaning clothes featuring popular IPs. In the kids’ world, those include Marvel superheroes and “Star Wars” characters.

Licensed apparel aimed at kids is often less than groundbreaking, from a design perspective. Usually, a plain T-shirt with an image of Spider-Man on it is enough to get the average 8-year-old interested, for example. For parents who want their kids to appear stylish, a plain and uninspired use of a licensed image is unappealing. But kids, especially boys, want those characters, Krug said.

The solution for Abercrombie Kids is to secure licenses that kids love, but infuse them with a subtler, more fashion-forward design. For example, it currently sells a hoodie featuring the “Star Wars” character Boba Fett, who was recently featured in the Disney+ show “The Book of Boba Fett.” But rather than feature a simple still of the character, Abercrombie used a vintage ’70s illustration of the character paired with Abercrombie branding in a similar, worn font.

“We talk a lot about ‘parent bait’ and ‘kid bait,’ in terms of what gets each audience excited,” Hall said. “Licensing is kid bait. They love Spider-Man. When they see that, they want it. But we really try to stand out from how other brands use those licenses by making them a bit more elevated.”

Abercrombie & Fitch, which also owns Hollister, has made something of a comeback in the last year. After seeing sales dip throughout the mid-2010s, the brand achieved global sales growth at end of the decade. And its 2021 sales were up 10% from the year before. This was driven by a 17% sales increase in its largest market, the U.S., and a 12% increase in the segment of the business that includes Abercrombie’s adults’ and kids’ lines. The company does not break out sales between the two lines in its disclosures.

The tween fashion market is expanding. New players like Sugar & Jade and Franki by Francesca and returning giants like Justice, which relaunched at Walmart last summer, have grown the field. For its part, Saks Fifth Avenue launched more than 60 brands in its children’s category in 2021, including Off-White, Armani and Moschino.

With such a crowded market and a lot of money up for grabs, standing out is more important than ever.