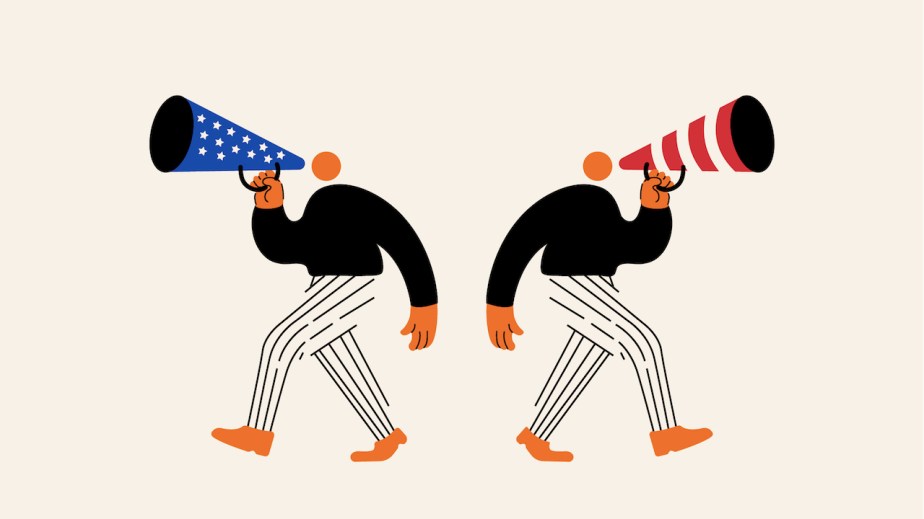 In today’s Fashion Briefing, brands are avoiding getting political or responding to the Capitol riot in one of three predictable ways.

Where are all the political brand posts?

It’s been an unsettling couple of weeks, but only some fashion brands are acknowledging it.

Despite a mob of Trump supporters storming the U.S. Capitol building on January 6, in the days following, it seemed — according to my brand-heavy feed — that fashion brands’ Instagram strategies had remained relatively unaffected. To confirm, I did a quick audit of the Instagram accounts of 2020’s top-50 fashion companies, based on earned media value, according to influencer marketing tech company Tribe Dynamics.

The find: Indeed, a large majority of the brands have avoided making any reference to the nation’s political strife and have continued to post UGC and campaign imagery like clockwork.

That’s in sharp contrast to brands’ Instagram strategies in early- and mid-2020, when they moved fast to promote contributions to Covid-19 relief and, following George Floyd’s killing, to make a show of support for Black Lives Matter. While each of these circumstances is very different, they all captivated the nation and made an impact that’s set to last. The varied responses of these time periods call into question what conversations brands feel the need to join and with what issues they’re willing to align.

“Maybe the lack of brand comments is because [the current situation] is political versus about social injustice; [getting involved] is a harder call to make,” said a marketer from a designer brand, speaking off the record.

Or maybe it’s because the implication of not participating in the political conversation is less clear-cut. “[Last year,] if you didn’t vocalize that you stood in solidarity with Black Lives Matter, the perception was that you didn’t support the movement, and you risked alienating a large portion of your community,” said Catherine Kulke, senior content editor at Tribe Dynamics. “Whereas, with the current movement, there isn’t as much of a sense that, if you don’t stand against what’s happening, you’re automatically pro-Trump.”

What’s certain is that, in the last year, brands have become more thoughtful about what they share across their channels. That’s thanks, in part, to the rise of cancel culture and industry watchdogs. “Not every breaking news headline requires a response,” said Michaela Atkinson, head of content at visual marketing software company Dash Hudson. “Brands with high engagement rates adjust their social media and communications plans on a case-by-case basis, and the savvy brands know how to differentiate between opportunity and obligation.”

Prioritizing messaging that reflects the brand’s ethos in all scenarios, while avoiding performative statements is now key, she said.

And so is listening to the brand community, said Brit McCorquodale, Tribe Dynamics’ svp of revenue. “Conversations start to bubble up in influencer and consumer communities,” she said. “And if it matters to consumers, and continues to matter, brands will eventually talk about it.” If that’s the case, it’s possible that some are simply waiting to see if things quiet down after the inauguration before chiming in.

In the last two weeks, the Instagram posts of the brands with high EMV have reflected the three distinct personas that have become industry go-tos. Below, a breakdown of each.

The all-knowing best friend
They’ll reference the trying times, they just won’t share their own views on the issues involved. At the same time, they’ll provide what they think you need, whether that’s encouragement, self-care tips or an opportunity to vent.

In general, the best friend dodges being accused of being insensitive or out-of-touch because they don’t totally ignore the climate. They read the room and craft a post accordingly, with the aim of being as non-controversial as possible.

“Best friends” that have come out of the woodwork since last week include Boohoo (No. 16 in EMV), which went the encouragement route: On January 6, it posted an image of a billboard reading, “Hold on and stay strong, better days are coming.”

There were also those that reminded followers to make time for self-care, including Pretty Little Thing (No. 3). On January 6, the fast-fashion brand posted “6 reminders for right now,” which included “Be good to yourself,” and “Write a list of things you are thankful for every day [to] keep your perspective in check.” On January 9, Fabletics (No. 18) posted, “Make time for self-care this weekend.” And the day prior, underwear brand Lounge (No. 26) posted the caption, “Find a quiet spot, and breaaaaathe your way into your happy place.”

Finally, there were the friends who were ready to talk shit with you. Nasty Gal’s (No. 28) January 8 post showed a topless woman giving the finger, paired with, “You know what, fuck you.… Tag your babes who need this energy right now.” On the same day, Savage X Fenty (No. 12) shared the “over it” sentiment, with a post reading, “Wanna ditch this shi?”

“Simply acknowledging when followers are going through a difficult time can be a great way to connect and form stronger relationships,” said Atkinson. “Brands that are succeeding with audience engagement put themselves in the shoes of their customers and pivot their content and messaging accordingly.”

The distractor-entertainer stays in their lane. They argue that their followers strictly come to them for fashion and inspiration, but that’s because they designed it that way; they’ve never commented on politics or vocalized their values. In high-stress times, they continue to post images of products, influencers and pretty locales, despite the risk of being seen as tone-deaf. But they also provide a retreat for followers who want to relax, enjoy themselves or let loose when all talk turns to conflicts.

Ultra-fast-fashion brand Shein (No. 11) fits the bill. On January 10, between going-out looks, it posted an image of wildflowers outside of a cottage, prompting wanderlust with its corresponding caption: “Tag who you’d want to come here with.”

The marketer speaking off the record said her employer has always avoided commenting on politics, across channels, as they don’t play into the brand’s mission: “We’re all about positivity. We’re not a political organization. For example, we don’t work with charities that are political. We’re a publicly traded company, and that’s just how we are.”

Kulke said brands that have already built identities around inclusivity and empowerment, like Savage X Fenty, are best positioned to see success with an “escapist” approach; for other brands, the risk of appearing flippant is high.

Sarah Flint, founder and designer of her namesake footwear brand (87,000 followers), said her brand has also aimed to be “a source of joy, a bright spot” on social media, since the start of the pandemic. But, she said, she doesn’t have blinders on or place restrictions on what can be posted. “We don’t hide from hard truths or stay silent about what matters. We act from our core values of kindness and respect, and strive to be transparent, genuine and receptive to feedback.”

The fair-weather politico
They’ll take a stance on big issues, but only when they think they’re glaringly top of mind.

The politico risks pissing off a large swath of their customer base, but they’re willing to go there to ensure they’re owning the narrative around their values. While getting in front of any possible questions on where they stand, they’re also strengthening their bond with like-minded members of their community. In addition, they’re potentially earning new shoppers looking to support brands that reflect their views — a signature move of Gen Z.

Somewhat surprisingly, many of the buzzy fashion brands that have made the boldest political statements since last week are in the fast-fashion category: On January 6, Fashion Nova (No. 1) posted an image of politician Stacey Abrams, along with the caption, “Not all heroes wear capes.” On January 12, Forever 21 (No. 25), which has Christian founders and bags splashed with John 3:16, acknowledged the riot by posting three paragraphs that included the generic, “We … are saddened by the recent acts of violence that took place in our nation’s capitol last week.”

As to be expected, the posts were met with mixed reviews via comments: Followers praised them and reiterated their support for the brand, or denounced them and the brand’s decision to weigh in. Forever 21’s commenters clearly read into the company’s sudden outspokenness. For example, one comment read, “Did y’all condemn the BLM protests too, or?”

Suzanne Lerner, co-founder and president of Michael Stars (57,000 followers), also chose to publish a brand post referencing the events of last week. She waited until January 13, then proceeded with an image of the Capitol building, along with a two-paragraph caption stating, in part, “The attack on the U.S. Capitol represents an attack on American democracy, a dangerous break from our democratic tradition, and must be rejected.”

Lerner said, rather than “talk about impeachment,” she wanted to educate followers by focusing on the constitution and Americans’ long road to current legal rights. Providing followers with timely educational resources is nothing new for the brand; in 2020, it pivoted its content strategy to focus on information around “the most timely issues,” including coronavirus relief and Black Lives Matter.

Likewise, Katie Underhill, senior director of Marketing at Tanya Taylor, said the brand strives to educate its 146,000 followers. But, like “best friends” and “distractor-entertainers,” it also wants to provide inspiration, and “spread optimism, inclusivity, color and joy.” Tanya Taylor did reference the Capitol mob on Instagram, on Thursday, with a post stating, “May yesterday’s horror inspire a better tomorrow.”

Defining one’s “crisis persona” is helpful, said McCorquodale, as it eliminates doubt and hesitation when the pressure is on. But, Kulke said, “what matters most is that a brand’s response [to trying events] feels authentic to their identity.”

Dr. Martens is getting ready to go public.

One by one, the fall 2021 fashion weeks are going digital.

Simone Rocha will be the next designer to go high street via a collab with H&M.

For fashion brands, corporate siloes are set to be things of the past.