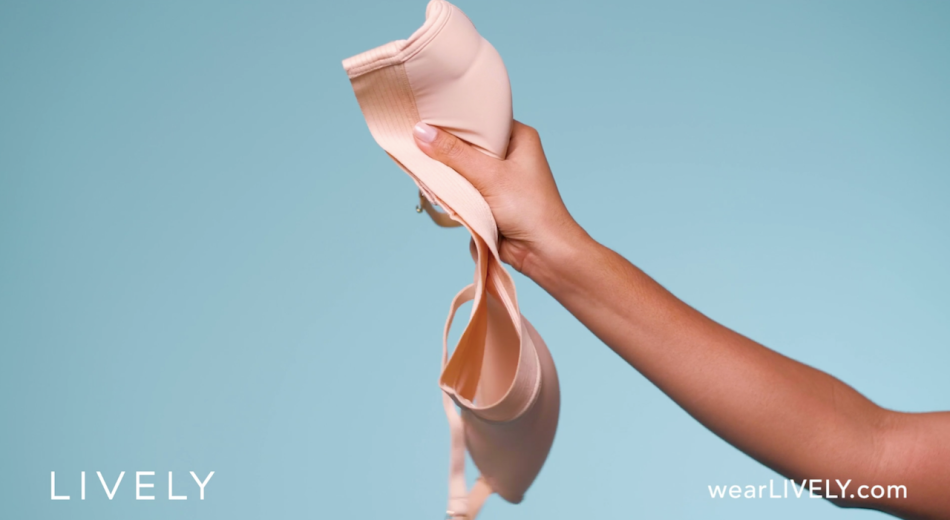 How Lively is using linear TV ads to acquire customers

In April, DTC brand Lively was among a number of DTC brands including Mack Weldon and ThirdLove that took its first plunge into a new marketing channel: linear TV. Since, brand founder Michelle Cordeiro Grant has been surprised by its consistently low cost and high reach. Now, as the brand gears up for its second big linear TV campaign campaign, Cordeiro Grant said she sees no cap on how much value DTC brands can get from the channel.

The new ad campaign for Lively will premiere on Jan. 18 and run across 20 channels, including MSNBC, Food Network and Discovery. It currently has no end date — the April spot ran through the end of summer. Unlike the brand’s previous commercial, which packed a showcase of multiple styles into a single ad spot, this one will focus on a single product, Lively’s best-selling bra called the Spacer.

“The initial decision [to invest in TV] started with us thinking, ‘Where are people, and what are they doing?’ and the answer is: at home, watching TV,” Cordeiro Grant said. “And our instinct was right. What we saw was a big filling of the top of the funnel, acquiring a whole new set of eyeballs we had never reached before, in new demographics and in new regions of the country.”

The brand’s typical consumer skews young, but Cordeiro Grant said that linear TV drove sales growth of 30% among baby boomer customers. It also brought in thousands of new customers from North and South Dakota and other Midwest states, growing the brand’s overall sales by more than 300% between April and early January. Prior, the brand’s customers were clustered in coastal cities.

Lively’s TV content strategy has been to assume the viewer has never seen or heard of the brand. Cordeiro Grant joked that her team tried to insert the word “Lively” as many times as possible into the 15-second and 30-second versions of the spot.

“The best way to think about it is to visualize the [customer acquisition] funnel,” Cordeiro Grant said. “At the top, we bring new people [to the website] with linear TV, then we can retarget them via Facebook or Google, which is more successful, because we’re reaching someone who has already heard of the brand. If we get their email, then we can speak to them even more directly.”

The featured content is similar to video content the brand has produced for its social channels, which combines user-generated content with agency-produced footage. Costs are roughly comparable, as well, thanks to the reliance on UGC. Cordeiro Grant said the brand’s linear TV ad spend is a small portion of the overall marketing budget, with more still going to paid search and social posts, and other digital ads. However, that percentage has grown.

Linear TV ad revenue was down for most of 2020, compared to previous years, thanks to the cancelation of sports and other live events, which means ad costs have been lower. In the second quarter of 2020, TV ad revenue was down more than 30% and, though it climbed back up through the rest of the year, it remained lower than in 2019.

One of the things that brought Cordeiro Grant back to doing linear TV after the April campaign (she purposely avoided TV in the fall, to avoid competing with election noise) was its relatively high value for the cost. Early in the process, she was given benchmark figures for cost-per-view and reach by a TV agency. The April TV campaign ended up having a CPV that was just 20% of the estimate, and it had a 20% larger reach.

One downside of linear TV that other DTC brands have noted is the relative difficulty of attribution, compared to Facebook ads, for example, which offer a degree of precision.

“On digital, you can track the ROI and conversion of a digital ad, one-to-one,” said Brian Berger, CEO of Mack Weldon, which also began using linear TV in mid-2020. “TV is a bit more of a triangulation. You have to look at site traffic, traffic to the homepage, keyword search and post-conversion surveys to get the same level of attribution as digital ads.”

Cordeiro Grant said attribution via linear TV is comparable to that of Facebook ads, it’s just apparent on a three- to five-day lag rather than being available instantly. It also requires the extra work of  comparing TV ad data with search data. And, she said, because she’s using linear TV as a top-of-the-funnel channel, attribution doesn’t have to be precise.

Like many digitally-native brands, she has spent much of the last few years focused on digital channels, young consumers and coastal urban cities. But she said her experience with TV ads opened her eyes to new opportunities.

“I don’t see a cap yet on what DTC brands can do with [linear TV] because my eyes are just now opening to how high the penetration of the channel is,” she said. “It’s this huge pasture that I think a lot of DTC brands are ignoring. You think that TV is something for an enterprise brand to drop $10 million on and just do brand impressions rather than brand introductions. But it has worked very well for us on the latter.”