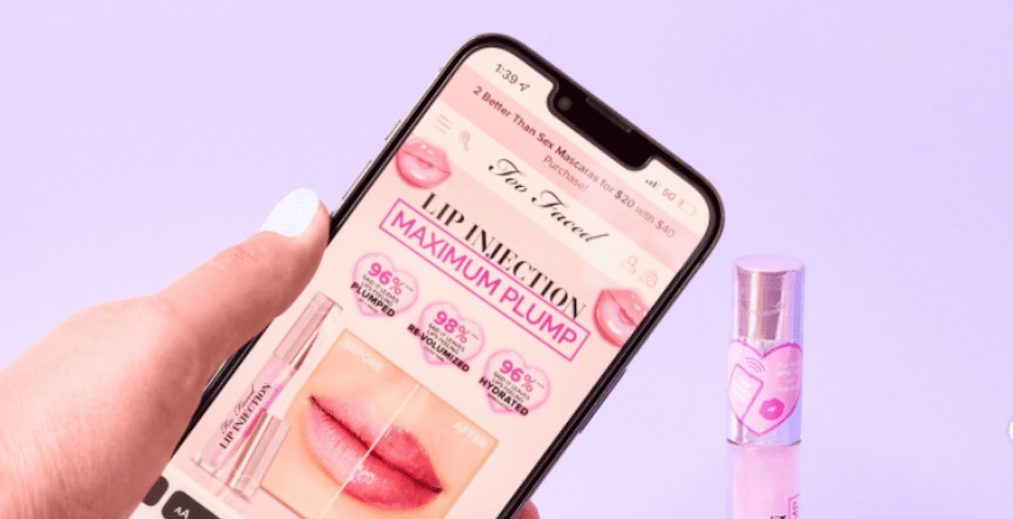 Editor’s note: A previous version of this story identified the contactless technology as QR Codes. This has been updated to reflect the technology is NFC tags.

In a first-ever marketing initiative for the brand, Too Faced has partnered with the subscription box BoxyCharm to engage box recipients through NFC tags.

It is imperative for every beauty brand to have a sampling strategy, but finding ways to excite customers and shine a light on hero products is still a challenge. Too Faced opted to engage with its first tech-enabled activation in order to educate potential customers about its hero product the Lip Injection Maximum Plump and why it is a market leader.

In June, Too Faced sent out 100,000 full-size versions of its Maximum Plump glosses in the monthly BoxyCharm box, which typically includes five products. An insert card in the box that’s used to inform recipients of the box’s contents instructed them to scan an NFC tag placed on the Too Faced lip gloss. When BoxyCharm subscribers scanned the code, they were brought to a special landing page allowing them to provide their email to receive a 20% discount to purchase the product later.

BoxyCharm, which was bought by Ipsy and formed BFA Industries in 2020, sends monthly full-size product boxes to its subscriber base. BFA Industries boasted 4.3 million subscribers in 2020, as well as $1 billion in revenue. NFC tags are similar to their technological cousin QR codes, but the main difference is the ease of use. Unlike QR codes, NFC tags do not have to be scanned with a smartphone camera app. NFC works just by tapping on the item (similar to Apple Pay) without the user doing anything on the phone itself.

“Every beauty brand out there has some sort of sampling strategy, but it’s all been done the same for many years,” said Somer Tejwani, vp of global marketing for Too Faced. “Instead of just giving someone a product, [we asked ourselves,] ‘How can we educate, entertain and inspire them to want to learn more about the product, and want to engage with the brand in a new way?’”

Tejwani said that it was important for Too Faced to approach this sampling experiment with a partner that has access to multiple customer touchpoints. For its part, BoxyCharm leverages an influencer network, email marketing and SMS texts. Though Too Faced could have sampled the products itself via its DTC e-commerce site or with one of its retail partners, its team wanted to test this approach with a wider net of people who are used to receiving samples.

One successful touchpoint was the results of BoxyCharm and Too Faced’s influencer network. Too Faced and BoxyCharm sent the box to seven paid influencers and 1,600 unpaid influencers, in order to show them opening the box, talking about the product and scanning the product with their phones. According to Kristy Westrup, svp of brand partnerships at Beauty For All Industries, the subscription box and Too Faced reached 71 million people through influencer activation. Because people received full-size products, it’s too soon to determine the activation’s success in driving sales.

Another successful touchpoint was the 100,000 emails sent to BoxyCharm subscribers. Westrup said that the marketing team included detailed instructions for people on how to scan the NFC tag based on their phones, as the scanning technology is placed differently on a phone depending on the model. Email open rates were 2% higher than average, she said but declined to elaborate. BoxyCharm’s own KPIs are predominantly focused on whether Too Faced fulfills its own, in addition to general engagement metrics and social reach.

“This is a great case study for us to determine whether or not this was a successful [activation],” said Westrup. “This is a data [capturing] opportunity, as well. Scannable technology has been around forever, but with Covid-19, [contactless tech] was bumped up to the forefront. It’s definitely a huge opportunity for all of us.”