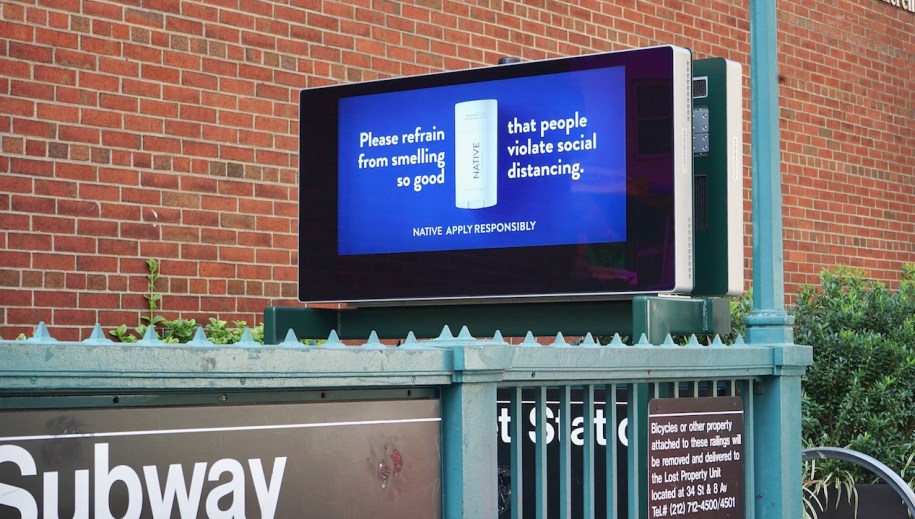 When the team behind Native went to relaunch its out-of-home ads in September, they knew they had to rethink their original campaign concepts because of Covid-19.

The clean personal care brand had initially planned to launch a brand awareness campaign focused on its natural deodorant’s efficacy in April, but that was pushed back as shelter in place began. Given the present circumstances, Native also wanted to go back to the drawing board on its marketing to both acknowledge the new normal without appearing tone-deaf and showcase some originality. The initial campaign included subway platform takeovers at Herald Square in NYC and the Embarcadero BART train station in San Francisco. The relaunched campaign strategy and objective had to be rethought, and all ads have been placed in above-ground locations in New York City, Boston and Native’s home city of San Francisco. The campaign began Sept. 14 and runs until Nov. 7.

Meng Li, vp of marketing at Native, said that the brand wanted to pursue OOH ads because to raise awareness, now that it has grown into multiple sales channels like Target and Walgreens and was acquired by P&G in 2017 for $100 million. Prior to this, Native predominantly focused on conversion-focused digital ads and affiliate marketing, but it has since expanded to OTT ads on YouTube. The original campaign was tongue-in-cheek, and focused on spotlighting effective natural deodorant solves using a series of stressful or socially anxious scenarios in which someone would need to use an antiperspirant. Native expected to reach $100 million in 2019 sales according to Dec. 2019 WWD story, and Vineet Kumar, Native’s CEO since Dec. 2019, plans to grow the brand to $500 million in sales in North America in an indeterminate time.

The revised campaign tries to maintain a sense of humor but also references coronavirus. Ads now display copy that underscores the pleasant scents of the deodorants like, “Please refrain from smelling so good that people violate social distancing.” A tagline states “Apply responsibly,” similar to alcohol ads with their “Drink responsibly” line. Li said that, because of the dominating effect the pandemic has had on everyone’s daily life, it would have felt wrong not to acknowledge it.

“The challenge is that we wanted to speak to it, but also be clear that [we don’t have the authority of] of the CDC, and we aren’t a public health organization,” said Li. “We didn’t want the creative to be a public service announcement about wearing masks. It would not have been on-brand for Native to speak about such a serious and important subject with that [authoritative] tone.”

Much like any other industry, advertising and marketing have had to adapt to the realities of coronavirus, and not all of these pivots have been successful. According to the Interactive Advertising Bureau data, 73% of advertisers have modified or developed new assets since the start of the pandemic. Of these, 53% are increasing messaging that emphasizes the mission of the company. But online discussions have also scorned the generic sameness of ads referencing coronavirus, with somber piano music and the phrases “uncertain times” and “we’re here for you” becoming ubiquitous tropes.

Syama Meagher, retail strategist and CEO of Scaling Retail, said that NYC, Boston and San Francisco are three cities that responded and adhered to public health ordinances regarding quarantining and mask-wearing, which make them likely to be receptive to Native’s humor. But she also pointed out that subway ads (which are placed above ground at subway entrances) may miss the mark as people who still need to take the subway are not necessarily in socio-economic classes where they can work from home or drive to their destination. Therefore, they’re some of the most vulnerable to contracting the virus.

“Someone who is [viewing those subway ads] is likely the same person who’s taking the subway; I don’t know how well those ads are seen by someone who is just walking past the subway,” said Meagher, adding that new virus cases are increasing again. “The direction of these particular ads are cheeky and fun, but it also may be too soon.”

Li added that Native’s media and marketing plan was already locked in with contracts signed, requiring Native to continue its OOH plans. But Native was able to rejigger the strategy to avoid underground stations since ridership in cities like NYC is still down 70% as of Oct. 8, compared to the same time last year. Instead, Native will have ads on 92 buses, 306 billboards and 20 wild postings across the three cities. Native was also able to renegotiate for a longer campaign, extending the original plan by about four weeks.

“Marketing has always been a mix of art and science; you try to get quantifiable and qualitative data to inform the decisions you’re making, but at the end of the day you never know what’s going to work or not,” said Li. “Layered on top of that, there’s just so much uncertainty with the way that people shop, if they’re in a mind space to shop and receive marketing messages, and if they have the same purchasing power they did before Covid-19.”