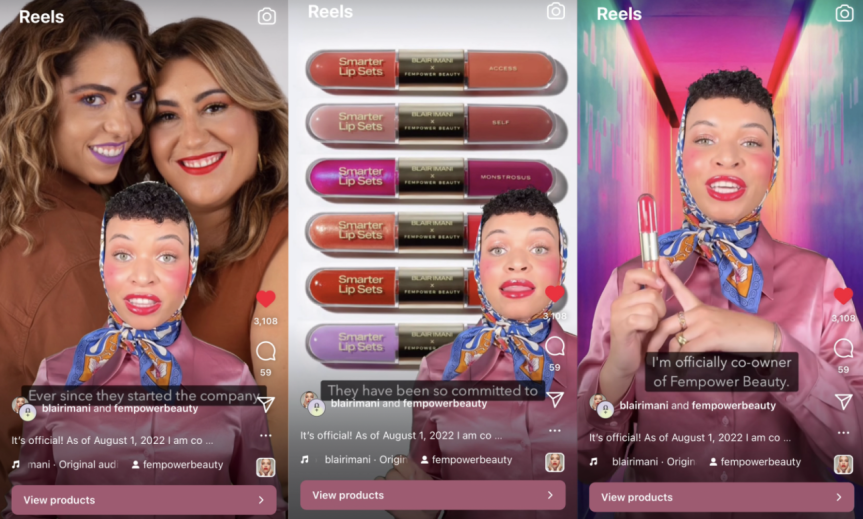 When Blair Imani was in college, she interned for an influencer, never imagining she’d become one herself.

“[My boss] was, straight up, like, you have to pick. You cannot do politics and influencing; you have to pick one,” she said. Imani had experienced a bit of notoriety at the time, having been photographed protesting on the steps of the Louisiana State Capitol. “I was like, ‘Well, I guess I have to pick politics.'” That was 2014.

Imani, now 28, has 519,000 followers on Instagram and 72,000 on TikTok. She is now best known for her “Smarter In Seconds” videos — a series of IG Reels and TikToks in which she educates her audience on a wide variety of topics, ranging from gender to feminism and history. “Now I’m doing both all the time,” she said. In fact, after a number of product collaborations and a series of personal investments, Imani officially became a co-owner of beauty brand Fempower on August 1.

Imani had met the founders of Fempower Beauty, Alexis Androulakis and Christina Basias, at The Wing in New York City in 2018. At the time, the co-founders (and now, also, wives — Imani officiated their wedding in July) were working on the first collection for their brand. They’d hired an Australian illustrator and noticed that some of the work she’d created for the brand looked strikingly like Imani. “They said, ‘This is our concept art for our first collection. Will you model for us?'” Imani said, noting that the art featured “a tan-skin, green-eyed girl with big lips, a pink turban and pink lipstick.”

“I was like, ‘I’ve always wanted to be like a supermodel. Of course.'” she said. “When we were on set, I kept saying, ‘If I get really famous, can we do a lipstick collection together?’ They were like, ‘Sure, whatever.'” And then 2020 happened.

Like many other Black female creators that went viral “talking about racism,” Imani’s following grew exponentially during summer 2020, she said. “All these pages started sharing hashtags like #FollowBlackVoices. At the time, I was really irritated; it felt like everybody was finally listening, but all marginalized communities [likely] experienced this thought of, ‘So, now you fucking care.,'” Imani said.

By 2021, Androulakis and Basias started working on the concept for Imani’s first product collaboration with Fempower. The collaboration of Smarter Lip Sets. They featured six dual-ended lip products, each featuring a matte and dewy color, as well as a corresponding affirmation. Via Zoom, Imani said she’d started “micro-investing” in Fempower even before her collaboration with the brand launched.

She thought, “I’m gonna squirrel some money away for micro-investment in my friends,” she said. “Because when we think about large-scale capitalism and investments, that’s what all these bros are doing. If we do that in these small ways, it’s not just sitting in savings, but it’s growing your and other people’s dreams.”

She had some trepidation about the collab. “It was a lot of impostor syndrome,” Imani said. She considers herself an “educational influencer” and a “nontraditional influencer.” Of course, influencers making investments in and taking ownership of companies is increasingly common. Take Nudestix’s approach to working with influencers.

Now, Imani’s challenge is to continue to marry these two types of content — a task she is prepared for.

“I really believe in this mission,” she said. “What does it mean to co-own a beauty company that is aware and supportive of the idea that people are beautiful, whether or not they buy our products and whether or not they have makeup on? There are so many beauty companies that are really committed to this messed-up idea of, ‘We’re fixing problems, we’re solving issues.’ That’s instead of being like, ‘No, you’re beautiful, whether you want to enhance yourself or not. if you want to decorate yourself, use our products. But you don’t have to.”