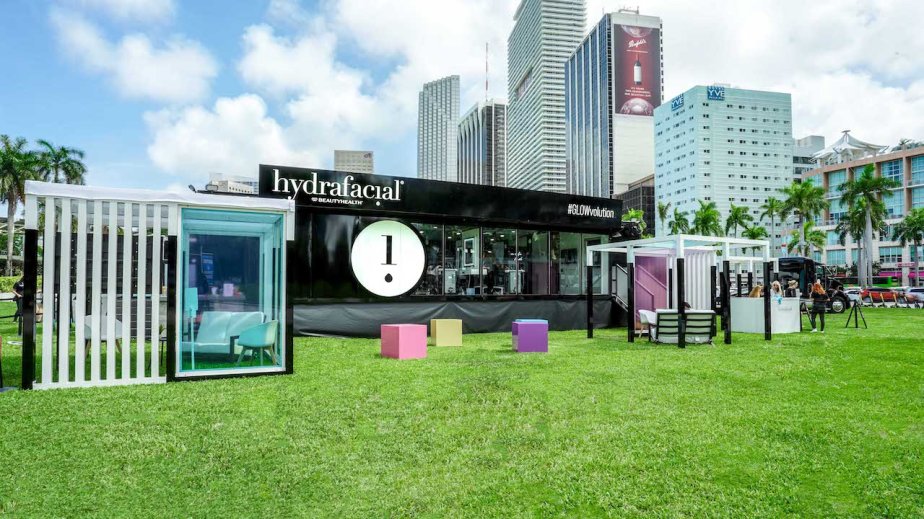 Hydrafacial is hitting the road this summer, using a tour bus to seize customer desire for a quarantine glow-up.

The tour bus begins in Miami before venturing to nine other cities including Atlanta, New Orleans, Detroit, San Diego and more by September. The tour bus accommodates 13 treatment chairs (treatments are free) and includes an outdoor lounge, on-site store, Instagrammable walls with the hashtag #GLOWvolution, hand treatments and a 180-degree photo booth. Clint Carnell, Hydrafacial CEO, said the tour cities are “super-geographies” in which Hydrafacial has the most consumer traction. The strategy is to garner social engagement from loyalists and introduce existing and new Hydrafacial users to aestheticians and businesses who perform the service. Hydrafacial’s business operates by selling $25,000 machines to dermatologists and medspas and its corresponding products to operate the machines.

“Skin care can be very confusing to the average consumer,” said Carnell. “This tour is a big commitment by the company to get our customers back out there and to raise awareness. Our biggest challenge right now is consumer awareness.”

Hydrafacial has had a busy year. In January, it began a partnership with Murad skin care to offer a special Murad Retinol Booster treatment. It went public via a SPAC merger in March, operating under the name The Beauty Health Company, and followed up with its first earnings report on May 13. Net sales for the first quarter were $47.5 million, a year-over-year increase of 46% from 2020. Throughout 2020, Hydrafacial lowered marketing expenses and decided to delay marketing programs until Covid-19 restrictions were lifted and markets reopened.

As Glossy previously reported, there is also a pent-up demand to go out. This has led to an increase in beauty services. Fellow facialist brand VI Peel has seen a 100% increase in VI Peel sales so far in 2021, compared to the same period in 2020, said Marya Khalil-Otto, Vitality Institute CEO. Ever/Body medspa’s first-time consultations have doubled, and services to men increased by 50% since March, said Amy Shecter, Ever/Body CEO.

Liyuan Woo, Hydrafacial evp and CFO, said Hydrafacial is also using the tour as an opportunity to test out its iOS app, which launched mid-May. The app is designed to allow Hydrafacial users to follow their skin-health journey with or without their aesthetician. It is part of a larger trend of people seeking biometric skin data about themselves and tracking long-term results. Hydrafacial plans to introduce internet-connect and RFID devices in the first half of 2022, allowing Hydrafacial consumers to track their skin health across different geographies and providers.

“This year is an investment year, and we’re investing 11% more into the [sales] growth of the company,” said Woo. “And, 6% out of that 11% is invested into marketing. This tour is a key part of that investment.”

As of this reporting, Hydrafacial is currently running paid static ads on Facebook and Instagram targeting people in its tour cities of Miami, Atlanta and Austin. It’s promoting its free $250 deluxe treatment and other pop-up features. Viewers are directed to sign up on a special landing site. Hydrafacial also invited influencers in an unpaid capacity to join the events and post about them.