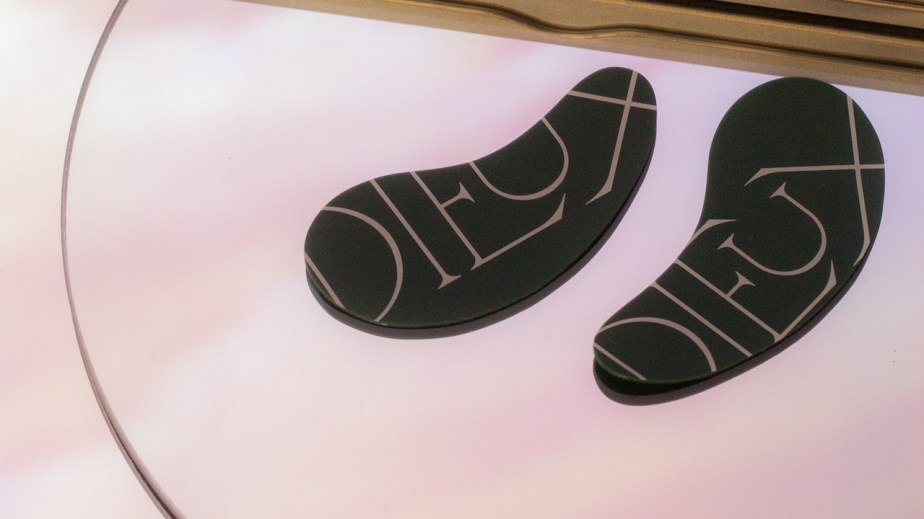 How Dieux emerged as the cool-kid eye mask brand

The social media status symbol of the stay-at-home era is not the latest “it” bag, but rather a cult eye mask.

Launched in September 2020, Dieux’s distinctive reusable eye masks have popped up on the Instagram feeds of celebrities such as Hailey Bieber, models including Salem Mitchell and Marisa Bryant, and a range of nano to mid-size influencers. The masks, which are available via the brand’s DTC site, are currently sold out with an 11,000-person wait list. There is a restock happening next week, according to the site. It also debuted on the FastAF app four days ago, which has been doing “drops” of in-demand items from brands including PlayStation and Fear of God. Dieux recently introduced a hand sanitizer and is planning to release a cannabis-infused anti-aging serum this year.

For Dieux, Instagram has been the main focus for its social marketing. The eye masks are easily recognizable with their branding, following a tradition of other social media-friendly patches such as Starface’s zit stickers and KNC Beauty’s lip masks. While the brand has 25,000 followers on Instagram and 5,000 on TikTok, the eye masks have had much wider reach through their popularity with both influencers and regular users showing them off.

Its influencer selection process consists of reaching out to “people that we love on the internet and admire and think look really cool,” said brand co-founder Charlotte Palermino. “That’s really it. We also just randomly DM people on Instagram that have reached out to us and we sometimes send them stuff. They don’t need to have a lot of followers.”

The masks are also featured prominently on the popular TikTok account of Palermino, who founded the brand along with former Function of Beauty chemist Joyce De Lemos and Depop alum Marta Freedman. During the pandemic, Palermino has become a TikTok “skinfluencer” with over 230,000 followers. She was inspired to post on the app because of her experience working with the short video format on Snapchat at both Hearst Magazines and then Snapchat itself. She is known for her straightforward skin-care advice and provocative takes.

“I used to work in the algorithms space; I know how certain things trigger other things,” said Palermino, of how she built her audience on TikTok. “Outrage is a thing that works exceedingly well on the internet.” Palermino’s outspoken videos are focused on cutting through marketing language or “poking some holes in what a lot of people popularized.” That includes candid reviews of viral products she condemns such as pore strips, as well as defenses of products that have come under fire such as Vaseline. Some of her most popular videos on TikTok include her bold statements about clean beauty, such as “Parabens are super f-ing safe. I don’t know what to tell you. All the studies are so flawed,” and “Nature isn’t safer,” regarding the trend of natural beauty products.

“Clean beauty is a marketing term,” said Palermino. “Non-toxic means absolutely nothing. It’s fearmongering to get people to buy.”

This emphasis on evidence has carried over into Dieux’s branding. “With Dieux, we really want to create something that will help stop some of these leaps of faith in beauty, where you’re sold these miracle cures. You wait a couple of weeks, and it doesn’t work,” said Palermino. “We’re very honest about [the time] it takes to see results, the claims and the clinical research that go behind each of the ingredients we pick, and the claims we make as a result.” The brand has a policy to “only use market actives with third-party research,” as stated on its site.

Like other skinfluencers that have risen to fame on TikTok, such as Skincare by Hyram’s Yayayayoung and Vi Lai, Palermino’s myth-busting approach emphasizes authenticity and honesty.

“When you say something is bad, it is terrible, and it is going to ruin your skin, that is going to perform extremely well. It’s going to go viral,” and trigger the algorithm, she said. “People are going off in the comments.”

But, more recently, she said she has focused less on the controversial takes. “I realized that you can create great content without having to go down that path,” she said. “I unintentionally [started there], because I was like, ‘Oh, people will realize that I’m being sarcastic.’ It can get lost on people, so it’s better to just go with the facts,” she said.

This approach to beauty on TikTok has also been an antidote to the picture-perfection of Instagram.

“We have a lot of dysmorphia with our faces,” said Palermino. “It’s gone down this path where we’re staring at ourselves on screens all day, and when we look at what other people look like on screens, we’re like, ‘Why don’t I look like that?’ Well, nobody looks like that. Nobody. Everybody has pores, and if they don’t, they’re using a filter.”

But she has noticed an evolution on Instagram in recent months.

“My content used to work really well on TikTok; now it works much better on Instagram, with the advent of Reels,” she said, noting that she has received over 1 million views on her Reels posts. “Part of the reason why Instagram does better is because you actually have a community, and [Instagram] actually serves the content to people who follow you. Then you get the extra exposure from Reels, which then goes on the Discovery platform.”