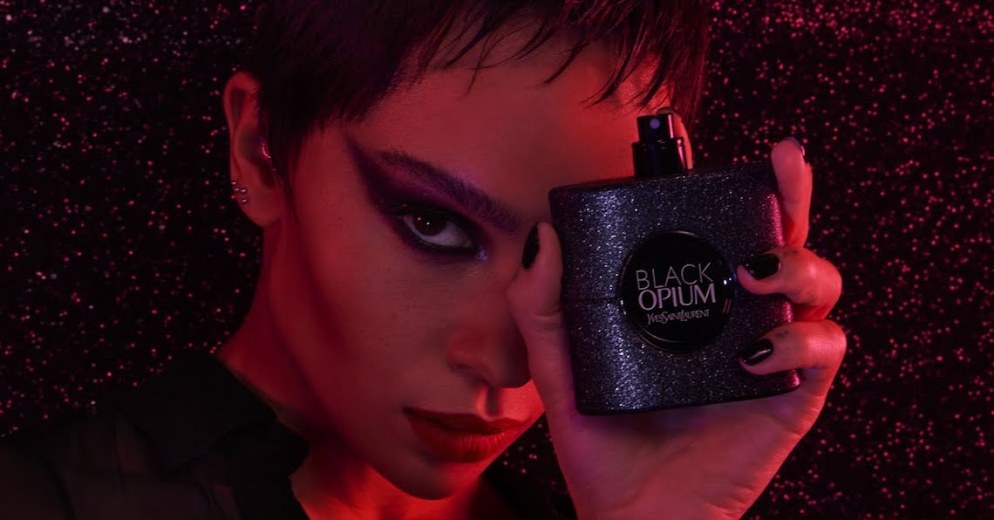 Coco Chanel once said, “No elegance is possible without perfume. It is the unseen, unforgettable, ultimate accessory.” And it seems the world agrees.

Fragrance sales, along with makeup and skin care, saw a decline in the first and second quarters of 2020, per NPD Group data. But unlike makeup and skin care, fragrance sales began to rebound by the third quarter. More recently, in the third quarter of 2022, fragrance experienced an 11% year-over-year sales increase to $1.3 billion. And according to Launchmetrics, the top fragrances in October 2022, based on their MIV, were YSL’s Black Opium Eau de Parfum, followed by Maison Francis Kurkdjian Baccarat Rouge 540 Eau de Parfum, Glossier’s You Eau de Parfum, Ariana Grande’s Cloud Eau de Parfum and Tom Ford’s Lost Cherry Eau de Parfum. MIV is a proprietary Launchmetrics metric standing for media impact value. MIV tracks the impact of influencers, print media, celebrities, official third-party partners and a brand’s own media channels. YSL’s Black Opium Eau de Parfum topped the list with $7.2 million in MIV. 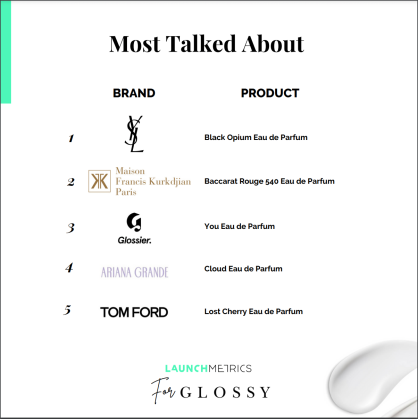 The list is notable because it is a mosh-posh of designer fragrances, niche perfume brands, in the case of Maison Francis Kurkdjian and Glossier, and a single-celebrity-led perfume. It represents the variation of the fragrance category, once dominated solely by designers and celebrities. But peeling back the history to reveal the power of each fragrance also makes their respective inclusion less surprising. For example, YSL’s Black Opium has been a hit since its launch in 2015 with actress Zoë Kravitz as its ambassador. According to The Zoe Report, Black Opium Eau de Parfum sold 36 bottles per hour, or 887 bottles per day, in 2019. Black Opium retails for $83 for a one-ounce bottle and features black coffee, white flowers and vanilla notes.

Meanwhile, Maison Francis Kurkdjian, founded in 2009 and majority-owned by LVMH since 2017, has focused on sensorial storytelling to drive the brand. It earned $5.8 million in MIV. Since its founding, Kurkdjian and co-founder and CEO Marc Chaya have shirked commercials and marketing interests in developing their fragrances. A 1.2-ounce bottle of their Baccarat Rouge 540 sells for $195 and features saffron, jasmine, amber wood, fir resin and cedar. TikTok has especially come to love the fragrance: Videos related to “Maison Francis Kurkdjian perfume” have 39.3 million cumulative views. Earlier in November, Maison Francis Kurkdjian followed up on the popularity of the perfume by launching a limited-edition gold-fleck body oil version.

According to Launchmetrics, influencers drive over 40x more MIV than celebrities by building interest and engagement with video content formats such as “My Current Favorites” or “Viral TikTok products.” YouTube is the top platform for marketing fragrance, topping all other social media channels in related MIV and placements.

The power of video content for fragrance brands has been noted before. After all, what are holiday commercials without cinematic and nonsensical ads for Chanel, Dior and other designer fragrances? In a 2016 New York Times story, Alexandre Choueiri, the president of international designer collections at L’Oréal USA, said, “Perfume videos launched online definitely lead to online sales.” He oversaw YSL Black Opium, which had a surge in sales after a short film by Harmony Korine went live on YSLBeauty.com and Sephora.com in February 2015. He said the 30-milliliter bottle was the No. 1 seller at Sephora in the first week of the launch.

“Looking at the top most-talked-about fragrance products within the industry, we can see that, interestingly, celebrities, which used to be the go-to marketing strategy for all fragrance brands, ranked as the [MIV subcategory] driving the least value,” said Alison Bringé, CMO of Launchmetrics. “Due to an increased need for individual expression and higher trust in peer-to-peer recommendations, brands focus on influencers to target distinct audiences with a specific purpose, ultimately converting in sales.”

Storytelling has always been a big part of selling fragrances. That’s especially true online, given the inherent limitations of selling a scented product. Notably, attitudes toward fragrance have evolved to become less about outward sex appeal and more about inner beauty. Glossier has leaned into this understanding well, and it has paid off. Glossier You sales have grown by double-digit percentages every year since its launch in 2017, according to a 2021 Glossy story. In 2020, the fragrance was one of Glossier’s top-five products based on revenue. Glossier You earned $4 million in MIV in October.

In a customer fragrance survey conducted with 750 people in July 2020, 25% of Glossier You purchasers said they bought it without ever having tried it. Furthermore, nearly 40% of customers who bought Glossier You last year were entirely new to the brand. At the time, Glossier was reactivating its focus on Glossier You by showing it more frequently on its social media channels and putting more paid advertising behind it. A primary focus was on using the product’s reviews in ads, which are also treated with prominence on Glossier You’s product page. Reviews often feature cinematic and literary descriptions of the fragrance, while less effusive reviews also have common traits, such as references to the fragrance’s lightness, reports of receiving compliments and remarks that the scent profile changes over time.

As the standout celebrity fragrance, one can only assume Ariana Grande’s Cloud perfume has something special about it. In fact, a November story from Harper’s Bazaar stated Ariana Grande as “the last great celebrity perfume.” Cloud is her fifth fragrance. It’s housed in a clear blue bottle with a white plastic cloud shape, which is a notable deviation from the bottle design of her first four fragrances. It earned $2.9 million in MIV. “What makes Cloud Cloud isn’t any single discernible note, but rather its enveloping, cozy quality,” the Harpers Bazaar story states. It’s often referred to as a comparable Baccarat Rouge 540 dupe and, according to The Zoe Report, a bottle of Cloud sold every 11 seconds in 2021. A one-ounce bottle sells for $45.

Tom Ford, which rounds out the list at No. 5 with $2.4 million in MIV, is also unsurprising. According to Glossy’s previous reporting on the recent Estée Lauder Companies’ acquisition of the Tom Ford International label, beauty comprises 70-80% of Tom Ford’s total business, with fragrance making up about 50% of its beauty sales. Tom Ford Beauty’s net sales for the fiscal year grew about 25% year-over-year, according to The Estée Lauder Companies. Lost Cherry launched in 2018 and features top notes of bitter almond, liquor and black cherry. Housed in the brand’s signature square bottle and in a seductive red shade, Lost Cherry sells for $240 for one ounce. The fragrance’s popularity, not to mention its tongue-in-cheek and nearly scandalous name, went on to also inspire a limited-edition makeup collection in 2021.