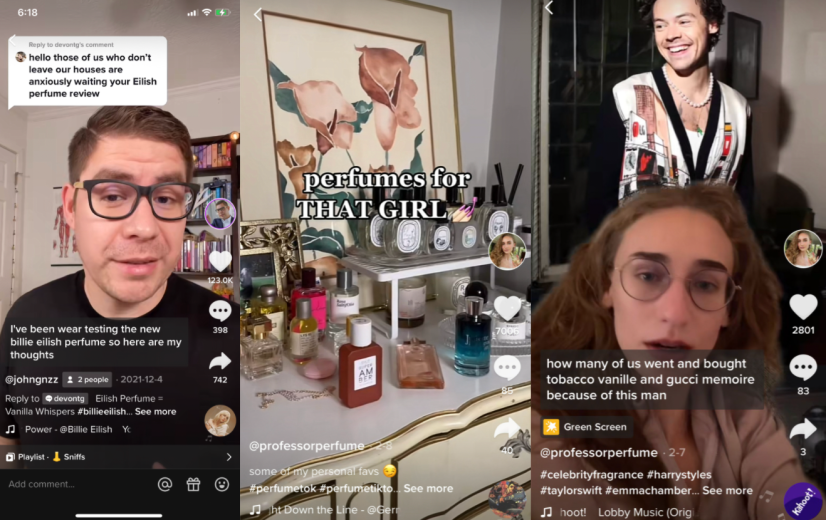 Glossy Pop Newsletter: Inside #PerfumeTok, where fragrance purchases are inspired by influencers, not smells

On TikTok, there is a niche for everything. I once watched a 3-minute video about the history of a single street in Chicago. (That algorithm…) And while makeup and even some skin care can provide a visual transformation — transformation being one of the biggest keys to TikTok success for beauty brands — perfume does not. That said, there is a growing and extremely engaged community on Perfume Tok, though modern technology has yet to achieve smell-o-vision.

Emelia O’Toole, who goes by the moniker Professor Perfume, started posting about fragrances in December 2020 and has since amassed over 245,000 TikTok followers.

“It’s just like with skin-care content creators and beauty content creators, where you find someone with a similar skin type or similar coloring to you. And then you’re like, ‘That’s my person, that’s my guru.’ With fragrance, it’s very much the same. If you find a content creator who has the same taste in fragrance as you do, then you never have to worry about smelling anything ever again,” O’Toole said, of the relationship she’s built with her followers. It’s one that’s helped break the barrier of buying fragrance sight unseen, or unsmelled.

#PerfumeTok has 506 million views, while #PerfumeTikTok has over 1.7B views. As is often the case with TikTok, the content that performs best is not about who has the prettiest, most immaculate shelfie — although a stacked fragrance collection is always eye candy. Instead, creativity reigns supreme on TikTok. O’Toole, for example, found herself on TikTok via an unexpected detour on the way to an academic career in literature. On #PerfumeTok, she’s found a way to combine both of these interests, as evident in this video, in which she responds to a request in a comment by recommending a scent that “gives me the same feeling as the end scene in ‘Pride & Prejudice.’”

But #PerfumeTok varies. There are creators who talk about scents by category (i.e., warm, sensual florals) or with fragrance brand overviews, for example. Fragrances that get you stopped on the street is also a common topic. And inserting fragrances into existing TikTok trends is popular. “If you have a trending sound or a funky pop song, and you pair it with the five best fragrances to smell rich or to smell bougie or to smell like old money,” the content will likely perform well, said to O’Toole — despite that TikTok is notoriously unpredictable. Responding to the zeitgeist by, for example, predicting what fragrances the characters on “Euphoria” might wear, is also a surefire win, O’Toole said, She noted that this kind of content requires a swift response and, as such, can be more stressful to create.

On #PerfumeTok, certain fragrances take on lives of their own. Ariana Grande’s suite of perfumes is also popular. Her Cloud Eau de Parfum is frequently mentioned as a potential dupe for a more expensive and popular-on-TikTok scent, Maison Francis Kurkdijan’s iconic Baccarat Rouge. John Gonzalez, who goes by @johngnzzz (270,000 followers) on TikTok, noted that celebrity fragrances often garner interest from the #PerfumeTok audience. “Anything that’s celebrity-sponsored or celebrity-branded [works]. Big-name [fragrances] bring us one step closer to associating ourselves with them, in some way; it makes them that more attainable,” Gonzalez said. Case in point: Gonzalez’s review of Billie Eilish’s recent debut fragrance, Eilish, was viewed nearly 750,000 times.

Another scent from luxury brand Maison Francis Kurkdijan, Amyris Femme, also took off on the app. The smallest-size bottle is $235. It spiked in popularity, thanks to videos about a tweet that shows a text in which a man asks a woman he almost dated what perfume she wore, so that he could buy it for the woman he wound up dating. “I got the fragrance and reviewed it, and that blew up,” O’Toole said. After that post, “[the brand] reached out to me and they were like, ‘We just sold so much perfume.’”

Now, brands are implementing strategies to engage with this engaged audience. Snif, a DTC perfume company launched in October 2020, started to see buzz on TikTok shortly after it launched, according to co-CEO and co-founder Bryan Edwards. “Shortly after, we created a brand account and dedicated time and resources to creating content, connecting with these creators and then partnering with them in as many ways as possible,” he said. He said @professorperfume (Emelia) and @perfumerism (249,000 followers) are partners, adding, “It’s been amazing to watch them both grow.” Still, the brand does not limit its partnerships to influencers with large followings. “Anyone is capable of having a viral moment on TikTok, so it’s really about choosing the most genuine people to partner with.”

Twisted Lily, an online boutique for niche fragrances, has had success with marketing on TikTok and partnering with #PerfumeTok creators, as well. “We started working with influencers in the summer of 2020 and were mostly working with influencers who primarily shared content on Instagram and YouTube,” said Elaina White, Twisted Lily’s affiliate marketing manager. “When TikTok began gaining so much popularity as a platform, we started working with some creators and found that Tiktok is a near-perfect medium for talking about fragrance,” she said. “We’ve found that commentary is super important for marketing fragrance, unlike other categories.” This is due to the obvious nature of the product being less easy to “demonstrate.”

“Fragrance is very unique and needs to be approached differently than other retail, given the nature of the product. Unlike a dress that an influencer can show themselves wearing or an eyeshadow palette that an influencer can show you swatches of on their arm, fragrance relies on a description of the scent. Other than the initial appeal of the packaging, a consumer is typically interested in a fragrance they see online for one of three reasons: the scent notes appeal to them, someone they relate to or inspire to be like wears the fragrance, or the scent is described in a way that appeals to them or intrigues them. Our influencer community has been incredibly valuable to us, when it comes to all three of those aspects.”

For luxury indie fragrance brand D.S. & Durga, TikTok has reinvigorated excitement about its old products. Debaser, a hero in the brand’s collection that first launched in 2015, has seen a huge resurgence in popularity thanks to #PerfumeTok. “In January, @nearlynoseblind posted a super emotional video about Debaser,” said Maureen Dempsey, the brand’s digital director. “She had mentioned it and a celebrity [Margaret Cho] purchased it [on her recommendation], and she jokingly asked for her ‘gold star.’ We sent her her own 50-milliliter bottle, which ‘knocked [her] flat on her tailfeathers,’ she said. And this TikTok unboxing and backstory received 31,000 views and 5,000 likes.” As a result, the brand saw a 600% spike in the search term “Debaser perfume” from the first quarter of 2021 to the second and third quarter of 2021, when most of the mentions on TikTok happened.

For Snif, TikTok is not an afterthought, nor is it secondary to Instagram. “TikTok was always part of our strategy, but we now think about TikTok and our community on the platform as one of the primary ways people can interact with us and our team. TikTok is what Facebook and Instagram were in 2010; it’s going to be the main way people discover creators and brands for the next decade,” Edwards said.

PerfumeTok: What is it?
PerfumeTok, or Perfume TikTok, is a community of fragrance lovers on TikTok that range from casual collectors to full-time influencers. It’s your one-stop shop for all the latest fragrance news and launches, and it’s taking the perfume world by storm!

Sillage: What does that mean?
A perfume’s sillage refers to the cloud of scent in the air around you — the sillage is how far the scent projects when you enter a space. Often, perfumes with higher sillage, or scent “throw,” are the biggest compliment-getters.

What’s the difference between an eau de toilette and an eau de parfum?
Fragrances come in many different formulated intensities. The basic composition of a fragrance is a mixture of the raw materials (where the smells come from) and a perfumer’s alcohol (which evaporates from your skin, leaving the good smells intact). Here’s a cheat sheet for the next time you’re at the perfume counter:

At Revolve’s first store, anyone can be an influencer