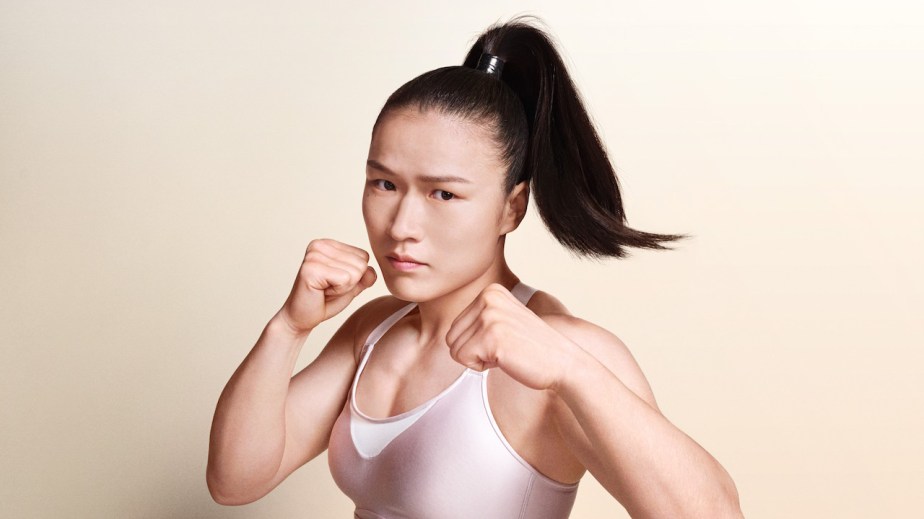 It’s no longer just Nike and Adidas signing strong female athletes for endorsement deals, as beauty brands are getting on board.

In late May, Estée Lauder launched a China-specific campaign featuring MMA champion Zhang Weili, while Olympic gold medalist Simone Biles was recently featured on the cover of Vogue following a global campaign she did with SK-II.

Estée Lauder’s campaign features Zhang, the first Chinese global women’s UFC champion, in a video applying the brand’s Double Wear foundation while training. In it, she says, “When I step in the ring, it looks pretty, and it still looks pretty when I step out of the ring.” It is the first time the brand has worked with an athlete in China, and one of the few times a beauty brand has ever worked with an MMA fighter globally. The last female MMA athlete to secure a significant beauty endorsement was Ronda Rousey, who was named a brand ambassador by Pantene in 2016. The campaign’s tagline was “Don’t Hate Me Because I’m Strong” and featured Rousey speaking out against narrow societal beauty standards.

“Zhang Weili represents an unconventional sense of beauty and power that Chinese women admire,”  said Ryan Li, the marketing director for Estée Lauder China via email. “As the first UFC champion from China, Zhang’s successful career demonstrates her perseverance and hard work to be the best in a field that is usually considered for men. She is a local icon for many Chinese women and we are proud to be partnering with her.”

“In the past, a muscular look on women wasn’t the beauty ideal, and so brands wouldn’t have risked using these women in advertising,” said Sophie Russell, a media planner at marketing agency Brave. “Now that the strong, healthy look is growing in popularity, brands are more happy to [feature them], especially now that other beauty brands have seen success in the strategy.”

To date, strong female athletes have received endorsement deals from brands due to particularly large achievements like winning a world championship or gold medal, pegged to major sports events like the Olympics.

SK-II launched its #nocompetition campaign in February connected to its sponsorship of the now-postponed Olympics. It featured female Olympic athletes, along with the tagline, “When did beauty become a competition?” For the campaign, Biles posted on Instagram speaking out against narrow beauty standards that have caused criticisms of her body.

“Today, I say I am done competing vs. beauty standards and the toxic culture of trolling when others feel as though their expectations are not met,” she said. Biles is also featured on the cover of Vogue’s August issue, with the article discussing her participation in promotional events for the SK-II campaign.

But the beauty standards being criticized are those that have been encouraged by the beauty industry itself.

“Beauty and body type has always been ‘idealized’ through the ages,” said Russell. “Beauty brands have both reflected and fueled these cultural trends, choosing, for example, Kate Moss and other super-thin models to promote their products in the ’90s.”

Female consumers have been pushing back against narrow beauty norms. According to Russell, the trend of “strong, not skinny” is popular among  younger generations active on social media, and “interest in watching women’s sports tends to have a younger skew.” Over half of the Women’s World Cup audience is between age 16-34.

“Beauty products can seem at odds with today’s body positivity movement. Young women don’t want to be told by brands to have to look a certain way or to have to change how they look to be happy,” she said.

“As a brand, we embrace the diversity of beauty, expressed not only through how women want to look but also via their inner spirit, and we focus on what they dream to achieve,” said Li. “Working with someone like Zhang Weili reinforces this belief.”