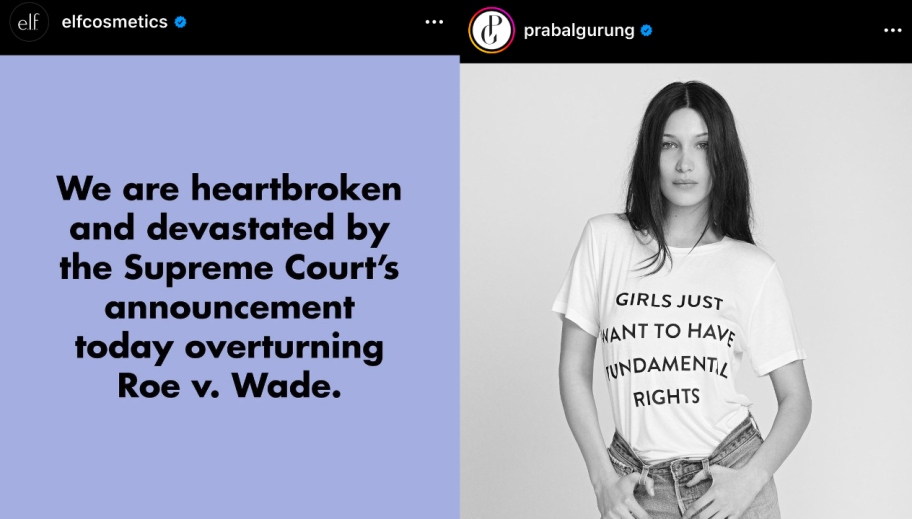 Fashion and beauty brands respond to the fall of Roe with grief, anger and support

On Friday news broke that the Supreme Court had overturned Roe v. Wade in a 5-4 vote, eliminating the federal constitutional right to abortion.

With the decision official, many brands across the fashion, beauty and wellness industries broke their silence and issued statements — some bolder and less vague than others — issuing their support. Statements ranged from those making the brand’s stance known to those also announcing donations.

In the cases of some larger companies, these statements came with bigger action. Brands like Dick’s Sporting Goods, Frame and Gucci have announced that they will reimburse any employees who need to travel to receive reproductive health care. Nike, Levi Strauss, Ulta Beauty and Estée Lauder announced that they will do the same, though Estée Lauder’s announcement was met with criticism in the comments of Estée Laundry, noting that members of the Lauder family donated to Donald Trump. Benefit Cosmetics has long been outspoken on reproductive health issues and is an official partner of Planned Parenthood — the brand made the same internal announcement and has two posts about reproductive rights pinned to the top of its Instagram profile.

Though there has been a groundswell of support, many large brands, such as those owned by L’Oréal and Proctor & Gamble, have yet to post about the ruling.

While some brands elected to post to Instagram stories, we are tracking those that have made permanent statements on their grids, which, as we have stated before, serves as a sort of modern press release. Glossy has tracked these brand statements since May, when a draft of this decision was leaked. The brands that responded before Roe was overturned can be seen here.

When brands make such posts, you’ll often find comments from both sides of the aisle: i.e. “I loved you and now will continue to shop from you,” or conversely, those announcing that they plan to take their business elsewhere. It’s worth noting that, on most posts, there are more positive comments. “This decision defies the will of the American people, 80% of whom support legal abortion. Poll after poll shows Americans overwhelmingly disapprove of the court’s move to overturn Roe v. Wade,” reads a press release issued by Planned Parenthood.

Rhode announced donations to Plan C, the National Network of Abortion Funds, and the AFIYA Center.

Parade announced a limited-edition collection, from which 100% of sales will go to support the National Network of Abortion Funds.

Lisa Says Gah announced that it will be donating 10% of net sales to Planned Parenthood on Friday.

Everyday Humans will donate 5% of the proceeds from its Take Five Reviving Aloe Mist to Planned Parenthood until the end of July.

Prabal Gurung is donating 100% of the proceeds of the T-shirt pictured above to Planned Parenthood.

Social Goods has posted multiple times since the ruling on Friday.

Frame also said it will provide reimbursements to employees traveling to receive reproductive health care out of state.

Lingua Franca has posted numerous times since the ruling on Friday.

Athleta said its employees will have abortion covered under Gap Inc.’s health insurance, whether in or out of their own state.

Dove, owned by Unilever, will cover travel costs for employees who need to travel out of state to receive reproductive health care.

Patagonia said it will pay bail for any employees arrested while protesting the decision.

Thrive Causemetics announced a $25,000 donation, but did not specify where the money will go.

Clare V. announced that it will donate all proceeds of the above T-shirt, as well as 10% of net sales on all purchases, to The Center For Reproductive Rights on Friday.

Lululemon announced a $500,000 donation to the Center for Reproductive Rights.

Fleur du Mal said it will be donating a percentage of sales to the National Network of Abortion Funds.